Japan trying to 'encircle' China by cozying up to India: Chinese media 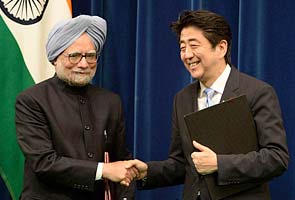 Beijing: Fuming over Japan's efforts to forge maritime security cooperation with India during the just-concluded visit of Prime Minister Manmohan Singh, a state-controlled Chinese daily today accused Tokyo of attempting to "encircle" China by building strategic alliances in the neighbourhood.

"On Manmohan Singh's four-day visit to Japan, both sides have discussed maritime security cooperation. A few days ago, when Shinzo Abe, Singh's counterpart, visited Myanmar, it was seen as Japan's attempt to complete a "puzzle game" in order to "encircle China," Global Times said in its editorial today.

"Japan's strategy for China drives its activity around China's neighbours, said an editorial titled 'Diplomatic row due to disoriented Japan'.

"But Japan's wishful thinking of encircling China is just an illusion. Japan does not have the strength to prevail over China's influence in Asia," the editorial said.

The allegation comes as China's attempts to forge close ties in India's neighbourhood were perceived as Beijing's attempt to encircle India. China is currently hosting Sri Lankan President Mahinda Rajapaksa and pouring billions of dollars of aid and investment into the island country, sparking concerns in India.

Today's editorial is the second such comment by official Chinese media over Japan's efforts to forge close ties with India during Dr Singh's visit. An article in People's Daily two days ago had termed Japanese politicians "petty burglars" for courting India.

In its editorial, the Global Times said China's rise has resulted in a change in the power pattern of the Asian-Pacific region, making Japan, which has a special geopolitical relationship with China, bear the brunt of this "painful" impact. "It will take time for Japan to face the reality that the once only great power in East Asia has to give way to China, whose GDP and marine strength will surpass that of Japan. The process will be tougher for Japan, which will be sincerely convinced some day," it said.

"The day will come sooner or later. The little tricks that Japan is playing are nothing but a struggle for self-comfort, which will not affect the development of Asia," it said.

Despite historic animosities, China and Japan have forged close ties in recent years with their bilateral trade touching USD 345 billion in 2011. But, the two countries are at loggerheads since last year over the disputed islands in East China Sea with both navies vigorously patrolling the waters to assert their claims.

The competition also intensified after China overtook Japan as the world's second largest economy in 2011.