It was the first time in more than 200 years an emperor had stepped down in Japan and kicks off the "Reiwa" era -- meaning "beautiful harmony". 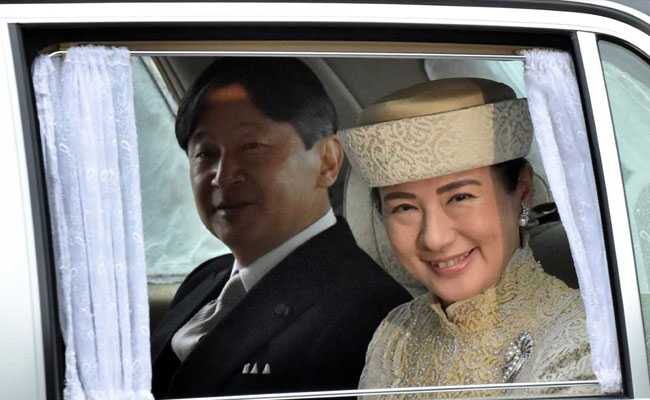 Naruhito, 59, became emperor after his father Akihito abdicated from the throne. (AFP)

A new era dawned in Japan on Wednesday as Naruhito officially became emperor at midnight following his father's historic abdication from the Chrysanthemum Throne, the world's oldest monarchy.

The 59-year-old Naruhito will formally take possession of the sacred imperial regalia at a solemn ceremony later Wednesday but he became the 126th emperor at the stroke of midnight, ushering in the "Reiwa" imperial era.

His father, the popular 85-year-old Akihito used his final royal speech to offer his "heartfelt gratitude to the people of Japan" and pray for global peace as the curtain came down on his 30-year reign that saw him transform the role of emperor.

During a 10-minute ceremony in the Imperial Palace's elegant Room of Pine, he stopped to offer a hand to his wife of 60 years, Michiko, as she stepped down from the stage and poignantly paused before exiting the room, bowing deeply to the 300 invited guests.

It was the first time in more than 200 years an emperor had stepped down in Japan and kicks off the "Reiwa" era -- meaning "beautiful harmony" -- that will last as long as Naruhito is on the throne. 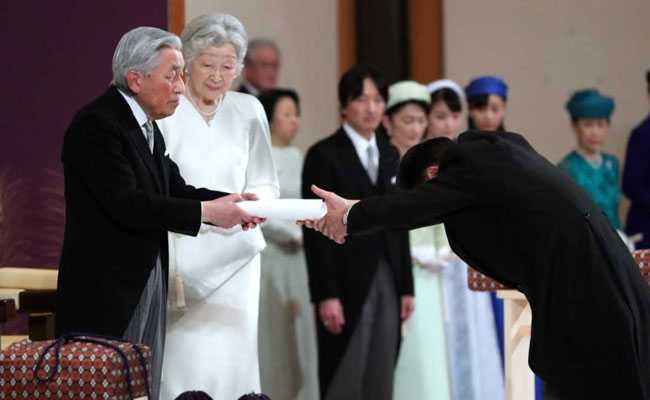 Naruhito became the 126th emperor of Japan in a 10-minute ceremony in the Imperial Palace's elegant Room of Pine. (AFP)

Constant rain dampened large-scale celebrations but a few hundred hardy souls gathered outside the palace as the ceremony unfolded while others watched on giant screens around Tokyo.

Bowing outside the palace, Miyuki Sakai, a 45-year-old housewife, told AFP: "It's sad I won't be able to see the familiar face on TV, but he's 85. I hope he'll have a quiet life with his wife."

Outside Tokyo, locals wearing kimonos performed a traditional dance in Gifu, central Japan, to mark the imperial transition -- planning to dance all night.

Several couples held their wedding ceremonies at midnight at hotels to join the national celebration.

And crowds braved torrential rain to see in the new era at Tokyo's famous Shibuya crossing.

"The emperor was a good person. He played an important role during the March 11 quake. He was the symbol of Japan. I hope the new emperor will carry on the kindness the old emperor had," said Rika Yamamoto, a 24-year-old company employee sheltering under an umbrella on the crossing.

However, not everything was beautiful and harmonious as minor scuffles broke out near Shinjuku, the world's busiest station, with right-wingers briefly clashing with anti-monarchy protesters.

Naruhito will formally "inherit" the imperial symbols of an ancient sword and jewel at a formal ceremony at 10:30 am on Wednesday. The third piece of the imperial regalia -- a mirror -- never leaves the palace.

As Naruhito ascends the throne, he will find a very different Japan than his father took over in 1989.

At the end of the 1980s, Japan ruled the world economically, its technology was the envy of every industrialised nation and its stock market at highs unlikely to be matched again.

But after a "lost decade" when the bubble burst, Japan is still locked in a battle against deflation and sluggish growth while its population ages rapidly and many rural areas suffer from depopulation to the major cities.

Naruhito will also face the challenge of continuing his father's legacy while maintaining Japanese traditions that stretch back centuries. 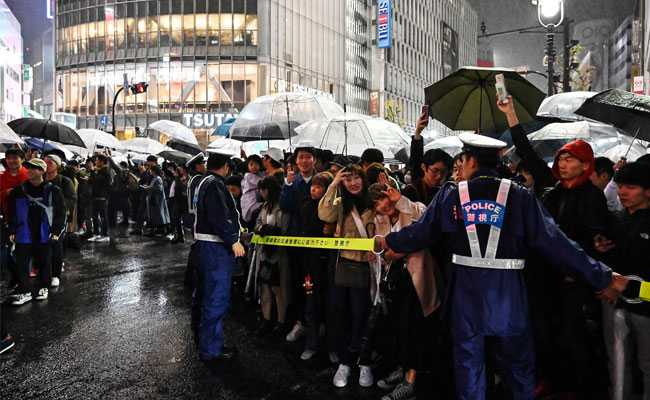 People stand on the streets under the rain as the new era of Japan's emperor begins. (AFP)

Akihito changed the role of emperor that remains sensitive in Japan after the country's militaristic past in the name of his father Hirohito.

He was loved for his popular touch and he melted hearts when he bowed humbly before victims of the 2011 earthquake and tsunami, gently comforting them and listening to their tales of suffering.

Waqas Adenwala, an analyst at the Economic Intelligence Unit, said: "Given the standards set by his father, Emperor Naruhito will be expected to maintain a similar approach and extend his outreach to the society through public appearances."

But the Oxford-educated Naruhito has also criticised the sometimes stifling constraints on the imperial family, especially as his wife Masako -- a former diplomat -- has struggled to adapt to life in the palace and has seen her health suffer.

"Masako may have difficulties fulfilling her duties but it will be good if she can participate in imperial tasks, so far as her health allows," Kumio Sudo, a 67-year-old pensioner, told AFP.

The abdication has resulted in a 10-day holiday in Japan, although polls show many famously hard-working Japanese were opposed to such a long break.

They have nonetheless seized on the rare opportunity to travel, with bullet trains and airports overflowing and Tokyo's usually packed commuter trains eerily empty at rush hour.

Meanwhile, entrepreneurs have sold everything from "Reiwa" bottles of sake to $10 cans of air from the "Heisei" era of Akihito's reign.