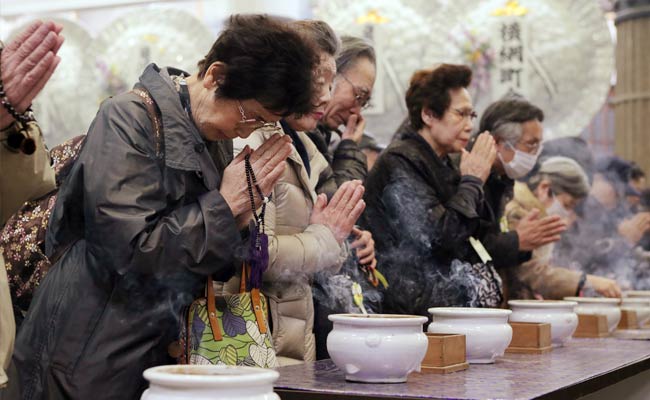 Relatives of victims of the US firebombings during World War II pray during a memorial service at the Tokyo Memorial Hall in Tokyo on March 10, 2015. (Agence France-Presse)

Japan today marked the 70th anniversary of the firebombing of Tokyo by US forces, a night that left an estimated 100,000 people dead in one of the bloodiest episodes of World War II.

Tens of thousands of civilians died in the scorching flames, with many more succumbing to horrific injuries over the following days and weeks.

The shocking death toll was higher even than the number of people who died in the atomic bomb attack on Nagasaki the same year, where approximately 70,000 lives were lost.

The nuclear bombing of Hiroshima killed around 140,000 people. Despite the terror the night engendered, the fire bombing has been little talked of in Japan, and today's ceremony in the capital was the first attended by a sitting prime minister.

Prime Minister Shinzo Abe was among several hundred people who gathered at a mausoleum where the dead are honoured.

"We will humbly face the past and will do our best to contribute to the world's eternal peace by keeping the lessons from the tragic war in our heart," Abe told the ceremony.

The ashes of thousands of unnamed victims are kept at the mausoleum. The names of more than 80,000 people are inscribed on a list of victims held by the Tokyo Metropolitan government.

Abe's attendance at the ceremony - and a rash of newspaper articles and television pieces about the raid - come as attention focuses on how Japan will mark the 70th anniversary of its defeat in WWII.

Abe, who is intending to make a statement later in the year, is among the leading lights of Japanese conservatives who are advocating a more sympathetic view of the country's war.

Promoted
Listen to the latest songs, only on JioSaavn.com
Some on the right believe Tokyo has been unfairly judged for its actions, with a conservative tranche insisting Japan fought a just war aimed at liberating Asia from Western occupation.

They say the firebombing of Tokyo, along with the nuclear attacks on Hiroshima and Nagasaki, are evidence of the injustices Japan suffered.

However, China and South Korea believe Japan has not done enough to atone for its warring, and insist Tokyo should apologise for its actions.