Advisory Neighborhood Commission 2A, as the panel is known, is expected to vote Wednesday to rename the street outside the Saudi Embassy for Khashoggi, a Washington Post opinions columnist who resided in Virginia. 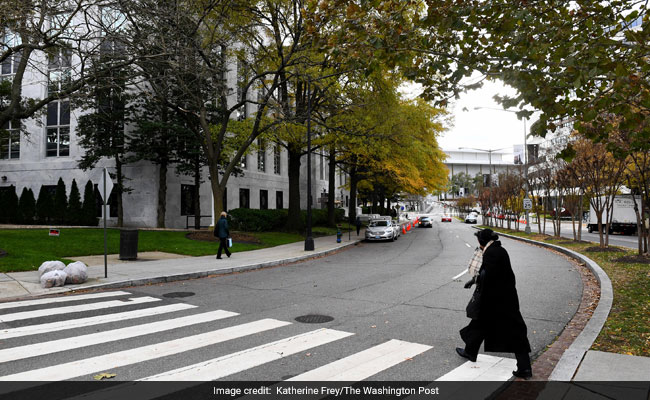 Under the proposal, the east side of New Hampshire Avenue NW would become "Jamal Khashoggi Way."

A neighborhood advisory panel in Washington that typically focuses on liquor license applications and other local concerns is inserting itself into the international furor prompted by the murder of journalist Jamal Khashoggi last month at the Saudi consulate in Istanbul.

Advisory Neighborhood Commission 2A, as the panel is known, is expected to vote Wednesday to rename the street outside the Saudi Embassy for Khashoggi, a Washington Post opinions columnist who resided in Virginia.

The measure would have to be approved by the D.C. Council, and, as is the case with all local legislation, would be subject to congressional review.

The CIA has concluded that Khashoggi's Oct. 2 killing was carried out at the behest of Saudi Crown Prince Mohammed Bin Salman, an assertion that has been questioned by President Donald rump, who is seeking to maintain strong diplomatic ties with the regime. Saudi officials have denied the prince's involvement.

William Kennedy Smith, the ANC's chair, said that he expects the commission to approve the resolution. But he also said that the Saudis "have a lot of friends and resources and there may be an effort to head it off."

Smith said that changing the street's name is not only intended as a pointed reminder of Khashoggi's killing - described as "state-sponsored" in the ANC's resolution - but also to promote the importance of a free press and freedom of speech.

"When we don't stand up for those values, it gives permission to others who are perhaps more brutal to take action," Smith said.

Smith, the nephew of President John F. Kennedy, acknowledged that global affairs are not the ANC's normal purview. But he said that Trump's muted response to Khashoggi's slaying and his unceasing criticism of the press has created an opportunity for the commission to become involved.

"There's a vacuum in terms of the U.S. response to this and it feeds into a larger conversation about the role of the free press," Smith said. "That's a conversation playing out in our own country when you have a president who introduces conspiracy theories and arguments that have no basis in fact. You have the language about 'enemies of the people' and 'fake news' that's applied to a wide variety of serious journalism that's not aligned with the interests of the president."

A spokesperson for the Saudi Embassy did not immediately respond to a request for comment.

Noha Kashoggi, the columnist's daughter, did not respond to an email to seeking the family's response.

However, Smith, working through Karen Attiah, Khashoggi's editor at The Post, said he received word that the family supports the idea of the name change. "It was important to know that they are comfortable with this and they are," Smith said.

Earlier this year, a street sign honoring slain Russian dissident Boris Nemtsov was unveiled outside the Russian Embassy on Wisconsin Avenue. A critic of Russian President Vladimir Putin, Nmetsov was shot from behind in Moscow in 2015. And last year, Sen. Ted Cruz, R-Texas, re-introduced legislation to rename the street in front of the Chinese Embassy "Liu Xiaobo Plaza," to honor the human rights activist in that country who died in Chinese captivity in 2017.

The idea to commemorate Khashoggi's death in Washington was first proposed last month in an online petition that has received more than 7,500 signatures.

Michael Werz, a fellow at the progressive Center for American Progress, and Gary Schmitt, a resident scholar at the conservative American Enterprise Institute, are longtime friends despite their political differences.

In Khashoggi's death, they found a common cause and launched the petition drive.

"Renaming the street is a good reminder that there are limits to what we tolerate," Schmitt said.

Both men said they were surprised by the outpouring for their petition, which they posted on Change.org. One man, when signing, wrote: "The Saudis have to remember their horrible crime every day."

"This has been an assault on core American principles," Werz said. "It's a very strong and encouraging conversation."