Two Dead In US Protests Over Shooting Of Black Man: Police

Violence broke out as hundreds of protesters marched for a third night in the Wisconsin city in anger after Jacob Blake was seen in video footage being shot up to seven times by police. 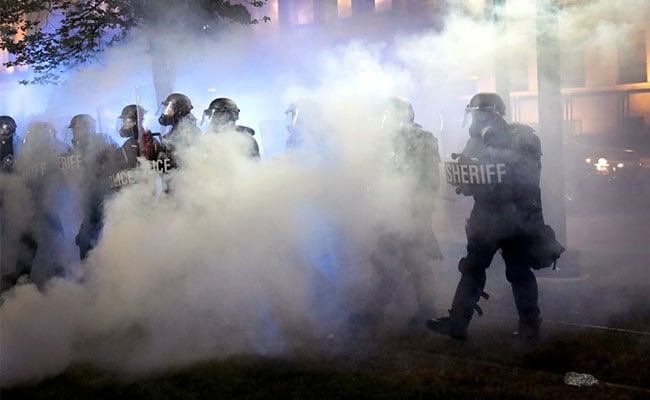 As tear gas fills the air, police try to push back demonstrators near the Kenosha County Courthouse

Two people were shot dead on Tuesday night in the US city of Kenosha, police said, as groups clashed during protests over the shooting of a black man.

Violence broke out as hundreds of protesters marched for a third night in the Wisconsin city in anger after Jacob Blake was seen in video footage being shot up to seven times at point-blank range by a white Kenosha police officer on Sunday.

The most recent police shooting of an African American has sparked outrage and protests in US cities, including New York and Minneapolis, as part of the huge Black Lives Matter movement.

The Kenosha police department said local officers, along with assisting agencies, responded to reports of shots being fired and multiple gunshot victims.

"The shooting resulted in two fatalities and a third gunshot victim was transported to a hospital with serious, but non-life threatening injuries," the department said in a tweet, adding the investigation was "active and ongoing."

Earlier, footage was posted online showing people running through the streets of Kenosha as gunshots rang out, while other videos showed wounded men lying on the ground.

The police statement said: "Investigators are aware of the social media videos being circulated regarding this incident."