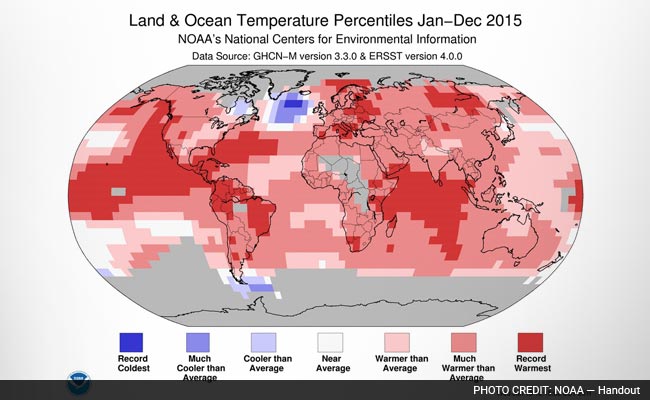 Last year shattered 2014's record to become the hottest year since reliable record-keeping began, two U.S. government science agencies announced Wednesday in yet another sign that the planet is heating up.

2015's sharp spike in temperatures was aided by a strong El Nino weather pattern late in the year that caused ocean waters in the central Pacific to heat up. But the unusual warming started early and steadily gained strength in a year in which 10 of 12 months set records, scientists said.

The new figures, based on separate sets of records kept by NASA and the National Oceanic and Atmospheric Administration (NOAA), could fuel debate over climate change in an election year in which the two main political parties remain divided over what to do about global warming and, indeed, whether it exists.

"2015 was by far the record year in all of the temperature data sets that are based on the instrumental and surface data," said Gavin Schmidt, director of the Goddard Institute for Space Studies at NASA, which made the announcement jointly with NOAA.

"It really underlines the fact that the planet really is still warming, there is no change in the long-term global warming rate, and we know why that is," he said.

"This record, we literally smashed," said Thomas Karl, director of NOAA's National Centers for Environmental Information. "It was over a quarter of a degree Fahrenheit, and that's a lot for the global temperature."

It certainly isn't the case that the record can be entirely attributed to the warming of the globe by human greenhouse-gas emissions. The year's powerful El Nino unlocked immense heat from the Pacific Ocean that drove up the global temperature.

But at the same time, 2015 was also considerably hotter than 1998, another major El Nino year that was, at the time, the hottest year on record. Now, in contrast, it's fifth or sixth on the list, depending on which agency you consult. And that, experts say, is how the warming of the planet makes itself felt.

"It's breaking the record because we also have this unusually strong El Nino, but at the same time we know the ocean is now absorbing two times more heat than around the last time we had a big El Nino, which is quite a while ago," said Katharine Hayhoe, a climate scientist at Texas Tech University.

Overall, NOAA said, 2015 was 1.62 degrees Fahrenheit (0.9 degrees Celsius) above the 20th-century average. Fifteen of the 16 hottest years on record have occurred in this century, according to NASA.

NASA and NOAA both keep independent global surface temperature data sets, measuring temperatures over both the land and the oceans using thermometers, ocean buoys and ship readings. The data sets do not always agree, but they showed relatively little disagreement this year, Schmidt said.

Conditions suggest that the warming will continue. Because a strong El Nino still is in place, "2016 is expected to be an exceptionally warm year, and perhaps even another record," Schmidt said.

Britain's Met Office recently forecast that 2016 could be "at least as warm, if not warmer" than 2015, in the words of research fellow Chris Folland.

However, not all scientists agree. "My guess is that 2016 may not be warmer than 2015," said Kevin Trenberth, a climate change and El Nino expert at the National Center for Atmospheric Research. He thinks the current El Nino may already have begun to peak, or has peaked, and thus the second half of 2016 may cool somewhat.

The release of the 2015 temperature data prompted statements from leading Democratic presidential candidates Hillary Clinton and Bernie Sanders. Clinton, in a Twitter posting, said, "Climate change is real. It's hurting our planet and our people. We can't afford a president who ignores the science."

The Sanders campaign also tweeted a response, saying, "Climate change is real and caused by human activity. This planet and its people are in trouble."

There were no immediate comments from the major GOP presidential contenders, several of whom have been openly skeptical of the mainstream scientific view that human activity is causing the planet to warm. Front-runner Donald Trump has dismissed climate change as a hoax.

According to the NOAA analysis on Wednesday, temperature records were broken every month in 2015 except for two: January and April. NOAA also announced Wednesday that for December, the "temperature departure from average was also the highest departure among all months in the historical record and the first time a monthly departure has reached 2 Degrees F."

From a climate policy perspective, the warmth of 2015 is also highly significant. Global leaders in Paris agreed in December that the planet should not be allowed to warm 2 degrees Celsius above pre-industrial temperatures - and ideally, warming should be limited to 1.5 degrees Celsius if possible. Based on 2015's temperature record, though, we're already half way to 2 degrees.

"This is the first year where the record is clearly above 1 degree Celsius above the 19th century," said NASA's Schmidt.

2015's El Nino enhanced heat was accompanied by dramatic weather events across the globe, including a new record for the number of Category 3 or greater tropical cyclones in the northern hemisphere. That tally includes Hurricane Patricia, the most intense hurricane ever recorded by the National Hurricane Center.

In some ways most ominously of all, 2015 was the year that scientists announced that a sector of Greenland - one containing over three feet of potential sea-level rise - appeared to have been destabilized.

Monthly NOAA temperature maps repeatedly showed a blue-colored "blob" of cold in this region, a development that is sparking increasing scientific interest, because of the suspicion that it could represent a sign of a change in the way ocean currents circulate.

"In the northern North Atlantic, temperatures were colder than normal, and that was really pretty much the only part of the world that had a sizeable area with below-average temperatures," Karl said.

All year, record warm temperatures and a growing focus on addressing global warming seemed in curious sync. It was the year that Pope Francis released his historic encyclical on the environment, Laudato Si, and the year in which the United States moved to regulate greenhouse gas emissions from the generation of electricity, their largest single source.

Most significant, as heat records over the year accumulated, nations of the world assembled in Paris to forge a global climate agreement that will serve as the template for locking in cuts to greenhouse gas emissions in coming decades.

It's hard to say that 2015's warmth directly contributed to these human decisions, and yet it's also hard to entirely separate the two. The stark warming of the globe in 2015 clearly imparted a newfound sense of policy urgency.

"NASA has been talking about the existence of global warming in public since 1988," said Schmidt. "1988 was also a record warm year for the time. Just so that people understand, it is now 23rd in the rankings."