The Aquarius, run by Franco-German charity SOS Mediterranee and Doctors without Borders (MSF), picked up the migrants in two separate operations and is now in international waters between Italy and Malta. 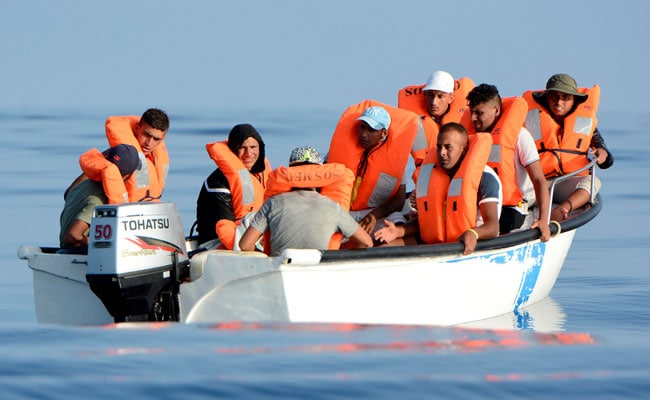 Italy has accused its partners of not sharing the burden of migrants who arrive on the border.

Italy on Monday said it would not offer safe harbour to the 141 people rescued by the humanitarian ship Aquarius off the coast of Libya last week, urging Britain or other European Union allies to take them in.

The Aquarius, run by Franco-German charity SOS Mediterranee and Doctors without Borders (MSF), picked up the migrants in two separate operations and is now in international waters between Italy and Malta.

The Aquarius spent nine days at sea in June after Rome's new populist government took office and shut its ports to all humanitarian boats, calling them a "taxi service" and accusing them of helping people smugglers - charges the charities deny.

"It can go where it wants, not in Italy!" far-right Interior Minister Matteo Salvini said of the Aquarius on Twitter, mentioning France, Germany, Britain or Malta as destinations.

"Stop human traffickers and their accomplices, #closedports and #openhearts", he wrote.

Transport Minister Danilo Toninelli, who oversees ports and the coast guard, said the ship's flag country, which is Gibraltar, should take responsibility.

"At this point, the United Kingdom should assume its responsibility to safeguard the castaways," Toninelli said on Twitter.

The British foreign office was not immediately available for comment.

The European Commission is in touch with several EU states and trying to help resolve the "incident" with the Aquarius, a spokesman in Brussels said.

Malta's rescue coordination centre told the Aquarius on Saturday that it would not welcome the ship, according to the charity ship's online log. On Monday, a Maltese government spokesman was not immediately available for comment.

Due to pressure from Italy and Malta, most charity ships are no longer patrolling off the coast of Libya. More than 650,000 migrants have come to Italy's shores since 2014.

Though departures from Libya have fallen dramatically this year, people smugglers are still pushing some boats out to sea and an estimated 720 people died in June and July when charity ships were mainly absent, Amnesty International estimates.

"Aquarius is now standing by at 32 Nautical miles from the European coast," the ship's digital log said on Monday.

In June, the Aquarius ended up taking some 630 migrants to Spain, which welcomed it, but the hard line policy has thrust immigration back onto the European agenda.

Italy has accused its partners of not sharing the burden of migrants who arrive on EU's southern border, stoking tensions particularly with France, Malta and Germany.