Flavio Di Muro from the far-right party, asked his fellow parliamentarians to bear with him as he took out a small box bearing a ring. 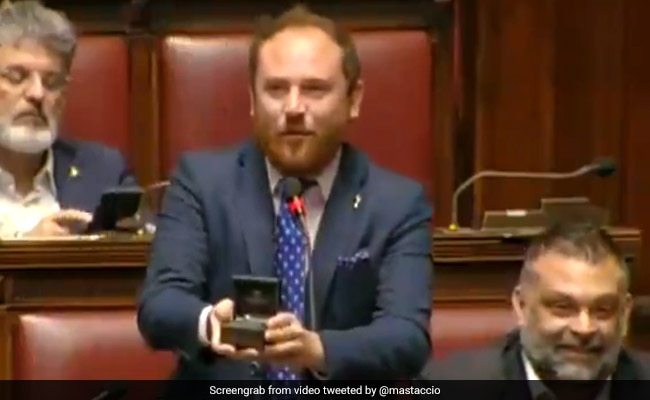 The marriage proposal was received with loud applause and MPs congratulated him.

An Italian lawmaker brought some romance to his parliamentary intervention on Thursday by proposing to his girlfriend who was watching proceedings from a gallery reserved for guests.

Towards the end of his speech, Flavio Di Muro from the far-right Lega Nord (Northern League) party, asked his fellow parliamentarians to bear with him as he took out a small box bearing a ring.

"Elisa, will you marry me?" Di Muro asked his lover.

The marriage proposal was received with loud applause as MPs flocked to their colleague to embrace and congratulate him.

Shortly after the romantic interlude, senator of the Democratic Party (PD) Stefania Pezzopane took to the floor and congratulated the couple, Efe news reported.

"Love always wins," she gushed, prompting a new warning from the speaker of the house, a member of the Five Star Movement.

Parliamentary president, Roberto Fico, meanwhile called on lawmakers to focus on the debate.

Although love took centre stage at the Italian parliament on Thursday, the atmosphere on Wednesday was very different.

Fico was forced to suspend the session after a huge brawl broke out between the MPs of the Lega and the PD when discussing reforms to the European Stability Mechanism.

Patrizia Prestipino, an MP for the PD, posted a video of the row on her Twitter account.

In the footage, some MPs are seen approaching Fico and heckling him.

"During a debate on the ESM, deputies of the Lega, stimulated by Birghi's biased intervention, start with physical aggression first against President Fico and then by deputies of the majority! A truly indecorous display! Ladies and gentlemen?" Patrizia Prestipino tweeted.

(Except for the headline, this story has not been edited by NDTV staff and is published from a syndicated feed.)
Comments
Flavio Di MuroProposal