'It Was A Different Mind-Set': How Trump Soured On Tillerson As His Top Diplomat

Donald Trump was so eager to fire Tillerson that he wanted to do so in a tweet on Friday. 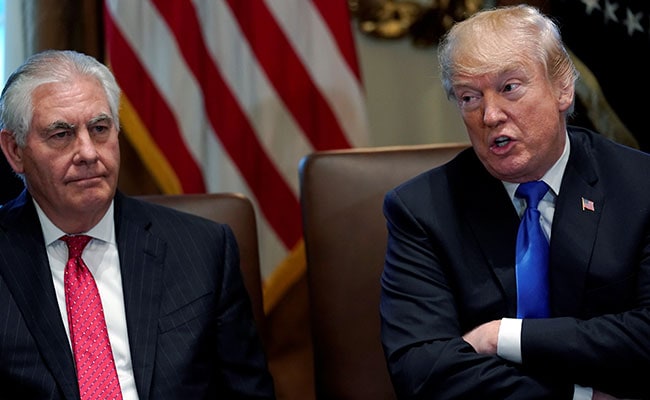 Secretary of State Rex Tillerson was asleep in his Nairobi hotel room early Saturday morning fighting a stomach bug when White House Chief of Staff John Kelly called to wake him around 2 a.m. to relay a terse message from President Donald Trump: The boss was not happy.

The president was so eager to fire Tillerson that he wanted to do so in a tweet on Friday, but Kelly persuaded Trump to wait until his secretary of state was back in the United States from Africa, two people familiar with the conversation said. It was Tillerson's first trip there since Trump disparaged parts of the continent as "shithole countries."

But Kelly had also warned Tillerson to possibly expect a pejorative tweet from Trump over the weekend, a State Department official said. Tillerson failed to fully understand that the chief of staff was gently signaling to him that he was about to be fired.

And so, just over four hours after Tillerson's government plane touched down at Joint Base Andrews on Tuesday morning, the secretary of state learned of his dismissal from a tweet Trump issued just minutes after The Washington Post first reported the news.

"Thank you to Rex Tillerson for his service!" Trump tweeted, in a message that began with congratulations for CIA Director Mike Pompeo, Trump's pick to become secretary of state. The president also nominated Gina Haspel to lead the CIA, making her the first woman to run the spy agency, if confirmed. Both she and Pompeo are subject to Senate confirmation.

More than three hours after his tweet, Trump finally called Tillerson from Air Force One. For Tillerson, it was a humiliating end to 14-month relationship defined by mutual animosity and frustration. In his departure statement Tuesday afternoon, Tillerson thanked career diplomats for their "honesty and integrity" and the American people for "acts of kindness" - but pointedly did not thank Trump or praise his leadership.

Tillerson's firing was long-anticipated, yet the way it played out stunned official Washington and was classic Trump. The man who made his name by declaring "You're fired!" on reality television is loath to actually fire people in person, outsourcing Tillerson's dismissal to Twitter.

Officials at the White House and the State Department, who have been at loggerheads since the beginning of the administration, offered conflicting accounts of just how the departure occurred. And the chaotic aftermath led to collateral damage - this time in the form of Steve Goldstein, the undersecretary of state for public diplomacy and public affairs, who was swiftly fired for contradicting the White House's version of events.

But Tillerson perhaps should not have been surprised by his ouster, which has been so long in the making that recurring rumors of his demise took on a nickname: Rexit.

"Rex and I have been talking about this for a long time," Trump told reporters Tuesday morning. "I actually got along well with Rex, but really it was a different mind-set, a different thinking."

Trump and Tillerson have disagreed over strategy in key areas of foreign policy, such as the 2015 Iran nuclear deal, the approach to North Korea and the overall tone of U.S. diplomacy. The president was disdainful of his secretary of state for being "too establishment" in his thinking and for disagreeing with him in meetings.

In a sign of the tension, Trump made one of his biggest foreign-policy gambles without so much as consulting his secretary of state. The president decided Thursday to accept North Korean leader Kim Jong Un's invitation for a face-to-face meeting, but Tillerson was traveling in Africa and was frustrated to have been excluded from the internal deliberations, administration officials said.

Tillerson had long expressed interest in a diplomatic solution to the nuclear standoff with North Korea, but Trump until recently had largely dismissed such talks as a waste of time and opted instead for a campaign of "maximum pressure" that included bellicose rhetoric from the president.

In the fall, Trump publicly undermined Tillerson after the secretary said he was reaching out to Pyongyang to try to open a diplomatic channel. In a pair of tweets, Trump wrote that Tillerson was "wasting his time trying to negotiate with Little Rocket Man . . . Save your energy Rex."

Yet last week, when Trump shifted strategy to meet with Kim, Tillerson was left out of the loop. If that angered Tillerson, it pleased Trump, who boasted to advisers that he enjoyed the process more without Tillerson involved, officials said.

Tillerson initially was regarded by some as too cozy to Russian President Vladimir Putin, whom he knew from his days as an oil executive, but over time he developed a more hard-line posture toward Moscow than Trump.

On Monday, flying home from Nigeria, Tillerson appeared to break with the White House in his assessment of the poisoning of a former Russian spy and his daughter in Britain. He singled out Russia as responsible for the attack, echoing the finger-pointing of the British government - something White House press secretary Sarah Huckabee Sanders declined to say earlier that day.

And the deposed Tillerson made a clear statement about Russian aggression in his departure remarks Tuesday. "Much work remains to respond to the troubling behavior and actions on the part of the Russian government," he said.

Trump for months has stewed over what he perceived as Tillerson's arrogance and condescension - a grievance exacerbated by an NBC News report, which Tillerson did not directly deny, that he had referred to Trump as a "moron" following a strategy meeting at the Pentagon.

"They fought all the time," said one Trump adviser, who like others interviewed for this story spoke on the condition of anonymity to candidly describe the relationship.

By contrast, Trump has enjoyed a far warmer relationship with Pompeo, who got to know the president by personally delivering his intelligence briefings. The two men have chemistry, though critics of Pompeo say he is too supplicating toward Trump.

The president had seriously entertained the idea of firing Tillerson numerous times over the past year - including in November, when the White House readied a plan to replace him with Pompeo. But Trump ultimately held off on removing his top diplomat in part, according to one adviser, because he wanted to defy the news reports saying that he planned to do so. "FAKE NEWS!" Trump tweeted regarding those reports.

The president revived speculation in recent days about firing Tillerson, and his eldest son, Donald Trump Jr., began telling friends Friday that he expected his father to oust the secretary after the weekend, according to someone familiar with the conversations.

Trump initially was drawn to Tillerson because of his stature as chief executive of ExxonMobil, one of the world's largest companies, and his work as a global dealmaker. He told friends that the broad-shouldered, silver-haired Tillerson could be a diplomat out of central casting.

Yet Trump quickly soured on Tillerson and made no secret of his dislike. He mocked his mannerisms and Texas drawl, saying his secretary of state talked too slowly. In conversations with advisers and friends, the president would often list others he said would do a better job than Tillerson, whom he frequently labeled "weak."

One source of weakness, the president felt, was Tillerson's media profile. Trump told one adviser he was "amazed" at how much negative press Tillerson received. "This guy never gets a good story about him," Trump said, according to this adviser.

Tillerson isolated himself from the thousands of career diplomats working for the State Department; maintained a distant and at times frosty relationship with his press corps for most of his tenure; and struggled to gain stature on the world stage, as many diplomats and foreign leaders correctly concluded that the secretary did not speak for the president.

Inside the White House, Tillerson had few allies. He was routinely undermined by Jared Kushner, Trump's son-in-law and a senior White House adviser who took charge of the Middle East and Mexico diplomatic portfolios. Tillerson resented appearing subservient to the 37-year-old, who had no foreign-policy experience. He sometimes took days to return Kushner's phone calls and griped that he felt the White House was keeping the State Department out of the loop.

Tillerson also clashed frequently with national security adviser H.R. McMaster, who he thought did not always follow protocol, and U.S. Ambassador to the United Nations Nikki Haley, whom he viewed as an internal rival, according to administration officials.

State Department officials took notice - and were chagrined - that Pompeo did not cite Tillerson when he appeared on television shows Sunday to explain the North Korea developments.

Tillerson frequently complained to colleagues that Trump was too mercurial and impulsive, and voiced frustration that the president struggled to focus during meandering conversation. But he was determined to stay in his job. Tillerson's stance, according to one official who has discussed these concerns with him, was: "If he wants me gone, he'll fire me."

Tillerson also was put off by Trump's vulgarity. An Eagle Scout and former national president of the Boy Scouts of America, Tillerson told confidants he was appalled by Trump's freewheeling political speech at the National Scout Jamboree in West Virginia over the summer.

White House staffers, meanwhile, were particularly unhappy with Margaret Peterlin, Tillerson's chief of staff, who kept tight control of the secretary's schedule and sparred with other administration officials. Peterlin, along with her deputy, resigned Tuesday, a State Department official said.

The gulf between the White House and Foggy Bottom was apparent Tuesday morning, as officials in both buildings offered conflicting accounts of Tillerson's removal.

White House officials said that Kelly's call to Tillerson last week was a clear message that Trump believed it was time for the secretary to leave his post, and suggested he return to Washington as soon as possible.

Tillerson cut his trip short by a day, departing Monday. But Goldstein said Tuesday morning that the secretary had intended to stay on the job for some time to come and was "unaware of the reason" for his firing. He added that Kelly told Tillerson only that "he could expect a tweet" from the president but that the chief of staff did not convey that the decision to fire him was final.

"He found out that he was terminated today," Goldstein said.

Goldstein was soon fired himself - just before he was scheduled to brief reporters about the shake-up at Foggy Bottom - for having publicly contradicted the White House account.

West Wing officials had accused him in recent weeks of privately criticizing White House decisions to reporters. Asked Tuesday about the accusation, Goldstein said: "I spoke for the secretary of state. That was part of my role as the undersecretary."

On Monday night, as news of Tillerson's likely departure began to leak, State Department officials dismissed the chatter as simply not true. But the secretary may have had at least a subconscious inkling that all was not well back in Washington.

Promoted
Listen to the latest songs, only on JioSaavn.com
"I felt like, look, I just need to get back," Tillerson told reporters aboard his flight home. "I just felt like I need to get back."