The strikes came in response to at least 10 rockets fired from Gaza late Friday at southern Israel. 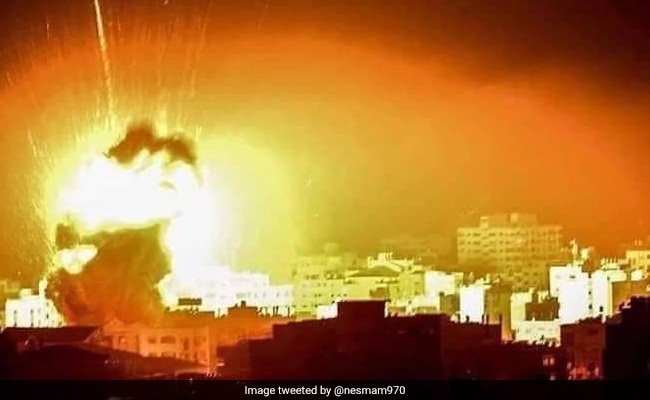 The rockets were fired in waves, the Israeli army said, with air raid sirens sounding

A Palestinian was killed by Israeli airstrikes on Saturday, the health ministry in the Hamas-run Gaza Strip said, in an attack launched in response to rocket fire.

Dozens of strikes hit the Palestinian enclave in the early hours, targeting bases of the strip's rulers and allied groups, a security source in Gaza said.

The Israeli army said the strikes targeted "a wide range of Hamas terror targets", including a Hamas naval site, a military compound and a weapons manufacturing site.

One person was killed, the health ministry in Gaza said, naming him as Ahmed al-Shehri, 27.

It did not say whether he was affiliated with any faction.

The sound of explosions could be heard up and down the impoverished territory, an AFP correspondent said.

A Hamas source said they had fired at the Israeli aircraft carrying out the raids and the Israeli army confirmed fresh "incoming fire" from Gaza.

The strikes came in response to at least 10 rockets fired from Gaza late Friday at southern Israel.

The rockets were fired in waves, the army said, with air raid sirens sounding.

One house was hit and damaged, without any casualties, the army said, posting a picture of the damage on Twitter.

It was the second consecutive evening that the army reported rocket fire from the Palestinian enclave, which is ruled by Hamas.

Prior to Thursday, there had been no such reported rocket fire from Gaza since September 12.

In August, a series of rocket attacks from Gaza and Israeli retaliations, as well as border clashes, raised fears of an escalation between Hamas and Israel, as elections approached in the Jewish state.

Those polls -- Israel's second elections this year -- took place on September 17, but have yet to yield a new government.

Sworn enemies Israel and Hamas have fought three wars in the Palestinian enclave since 2008.

(This story has not been edited by NDTV staff and is auto-generated from a syndicated feed.)
Comments
Gaza StripIsrael airstrikesHamas