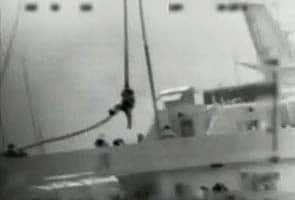 Jerusalem: An Israeli inquiry commission defended the actions of the country's troops during last year's deadly raid on a Gaza-bound protest flotilla sailing from Turkey, finding in a report released Sunday that Israel had not violated international law.

While offering some criticism of the way the takeover was planned, the commission's conclusions exonerated the government, the military and individual soldiers.

The findings were unlikely to put to rest the international controversy over Israel's actions, which badly damaged its relations with Turkey and led to the formation of a U.N. investigation. Turkey's prime minister dismissed the report hours after its release.

Israeli naval commandos killed nine activists aboard the Turkish protest ship Mavi Marmara on May 31 after passengers violently resisted the takeover of the vessel in international waters. The condemnation that followed the bloodshed forced Israel to ease the blockade on the Hamas-ruled Gaza Strip.

The nearly 300-page report released Sunday by the government-appointed commission said the blockade of Hamas-ruled Gaza, the decision to intercept the protest flotilla in international waters and the soldiers' use of lethal force were legal.

"The actions carried out by Israel on May 31, 2010, to enforce the naval blockade had the regrettable consequences of the loss of human life and physical injuries," read the report. Nonetheless, "the actions taken were found to be legal pursuant to the rules of international law."

A fifth Israeli participant, 93-year-old international law expert Shabtai Rosenne, passed away during the deliberations. Two other international experts, one German and one American, advised the commission.

Turkey recalled its ambassador to Israel after the incident and ties between the countries have not recovered. Turkey's prime minister, Recep Tayyip Erdogan, promptly dismissed the conclusions of the Israeli inquiry.


"To my judgment there is no value or credibility to this report," he told reporters in Ankara on Sunday. Haneen Zoabi, an Arab member of Israel's parliament who was on board the Marmara, called the commission "a broad and open platform for Israeli propaganda."

The Gaza flotilla was dominated by an Islamic aid group from Turkey known by the acronym IHH. The group has ties to Turkey's Islamic-rooted government and was banned by Israel in 2008 because of alleged ties to Hamas.

The flotilla aimed to bring attention to the Israeli blockade of Gaza, imposed after Hamas militants captured an Israeli soldier in 2006 and tightened after Hamas seized control of the territory the following year.

Soldiers were sent to commandeer the ships before dawn on May 31 after the flotilla ignored radio warnings to turn back and refused an offer to dock at an Israeli port and transfer humanitarian aid into Gaza overland. One of the ships radioed to the Israelis to "go back to Auschwitz," according to a military recording cited in the report.

Five small ships were commandeered without incident, but soldiers rappelling from helicopters onto the deck of the Marmara, with some 600 passengers on board, were mobbed by several dozen activists armed with bars, slingshots and knives as they landed on deck one by one, according to video footage released by the military.

The Israelis, who seemed not to have expected violent resistance, were beaten and some were thrown onto a lower deck. According to Sunday's report, two of the soldiers were shot, apparently with weapons wrested from the Israelis themselves. Both soldiers and activists have said they acted in self-defense.

The commission faulted the military planners for not taking into account the possibility of serious violence, saying "the soldiers were placed in a situation they were not completely prepared for and had not anticipated." Previous protest flotillas had surrendered without violence.

However, looking at 133 individual cases in which soldiers used force -- 16 of them involving shooting to kill -- the commission found soldiers had acted properly and that their lives had been in danger. The soldiers, the report said, "acted professionally in the face of extensive and unanticipated violence."

The commission said its report was based on the testimony of Israeli officials -- including the prime minister and defense minister -- and military officers, as well as testimony from the soldiers themselves and 1,000 hours of video footage taken from the military, the Marmara and its passengers.

The commission said activists on board the ship refused invitations to testify.

Alan Baker, a former legal adviser to Israel's Foreign Ministry, said the committee's makeup should boost its credibility among Israel's allies and predicted the U.N.'s investigative commission would take it seriously.

"I doubt very much whether it will make an impression on those elements of the international community who are pushing the anti-Israel hostility," he said.

Gisha, an Israeli advocacy group that opposes the blockade, criticized the inquiry's conclusion that the Israeli blockade did not constitute collective punishment of the civilian population. The blockade, meant to weaken Hamas, caused widespread damage to the economy while only strengthening the militants' grip on power.

"We don't understand how restricting the entrance of coriander, paper and industrial margarine into Gaza advances a legitimate military objective," said Sari Bashi, the group's director.

In the wake of heavy international criticism, Israel lifted virtually all restrictions on foods and consumer goods entering Gaza. But restrictions on exports, and the import of badly needed construction goods, remain in place.