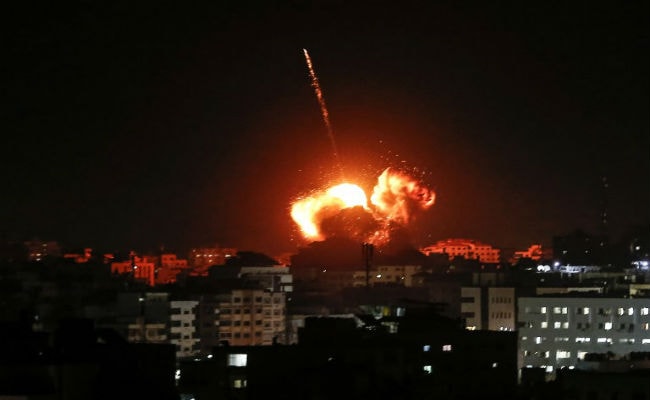 Israeli air strikes hit sites across the Gaza Strip on Monday in retaliation for a rare rocket attack that hit a house near Tel Aviv, before Hamas said a ceasefire was reached.

Israel, whose strikes began around the same time Israeli Prime Minister Benjamin Netanyahu met US President Donald Trump in Washington, has not yet commented on the claim.

"Egyptian efforts succeeded with a ceasefire between the occupation and the resistance factions," Hamas spokesman Fawzi Barhoum said.

The ceasefire claim came after Israeli air strikes hit the office of Hamas's leader and dozens of other targets across the Gaza Strip on Monday evening.

Those strikes were in response to a rocket from the Palestinian enclave that hit a home north of Tel Aviv and wounded seven people early Monday morning.

On Monday night, a barrage of rockets were fired from the Gaza Strip toward Israel in response to the strikes, causing air raid sirens to ring out in southern Israel.

There were no immediate reports of damage or injuries due to those rockets.

Seven people were wounded in Gaza, the enclave's health ministry said, as explosions rocked areas of the Gaza Strip and balls of fire rose into the sky.

There was no indication Hamas leader Ismail Haniya was at his office at the time it was hit.

In comments from the White House, Netanyahu said "Israel is responding forcefully to this wanton aggression," while Trump spoke of Israel's "right to defend itself".

Netanyahu said he would return home after meeting Trump, cancelling an address to pro-Israel lobby AIPAC's annual conference on Tuesday.

One Israeli strike destroyed a building in Gaza City that Israel alleged was a secret headquarters for Hamas security and intelligence.

Residents of Gaza said the building was known to house the Hamas-linked Multasim insurance company.

A joint statement from militant groups in Gaza, including Hamas and Islamic Jihad, took responsibility for the barrage of rockets fired in response to the Israeli strikes later Monday night.

The rocket from Gaza that hit a house in Israel early Monday was a rare long-distance strike and Israel's army said it was fired by Hamas.

A Hamas official, speaking to AFP on condition of anonymity, denied the group was behind the rocket, evoking the possibility it was caused by "bad weather".

The Israeli house hit was located in the community of Mishmeret, around 20 kilometres (12 miles) north of Tel Aviv, police said.

The rocket would have had to travel some 120 kilometres (75 miles) from Rafah in the southern Gaza Strip, where Israel said it was fired from.

The hospital treating the wounded said seven Israelis were injured lightly by burns and shrapnel, including three children.

One of the wounded was a six-month-old child and six of them were members of the same British-Israeli family.

The house was destroyed in the wake of the rocket and subsequent fire, with burnt wood, a children's toy and other debris piled at the site.

Israel and Hamas have fought three wars since 2008, and Netanyahu is believed to want to avoid another one with unpredictable results ahead of the elections.

But he faces a tough challenge from a centrist political alliance led by former military chief Benny Gantz and came under pressure to react firmly.

Gantz asked on Twitter, referring to corruption allegations against Netanyahu, whether the prime minister would "finally focus on the security of the citizens of Israel instead of dealing only with his legal concerns."

Monday's rocket followed another rare incident on March 14 in which two rockets were fired from Gaza towards Tel Aviv.

No damage or injuries were caused, but Israel responded to that and further rocket fire by hitting what it said were around 100 Hamas targets across the Gaza Strip.

Four Palestinians were reported wounded in those strikes.

Both Hamas and Islamic Jihad denied they were behind the March 14 rocket fire towards Tel Aviv, raising the possibility they were launched by fringe groups.

Israel's military said they were launched by Hamas, but later Israeli media reported the army's preliminary assessment was that they had been fired by mistake during maintenance work.

Even if the ceasefire announced by Hamas holds, there could soon be further tensions.

Saturday marks the first anniversary of Palestinian protests and clashes along the Gaza Strip's border with Israel.

An informal truce between Hamas and Israel had led to relative calm along the border, but recent weeks have seen another uptick in violence.

(Except for the headline, this story has not been edited by NDTV staff and is published from a syndicated feed.)
Comments
HamasIsraelGaza

"Nissan Is Turning Against You": What French Envoy Told Carlos Ghosn