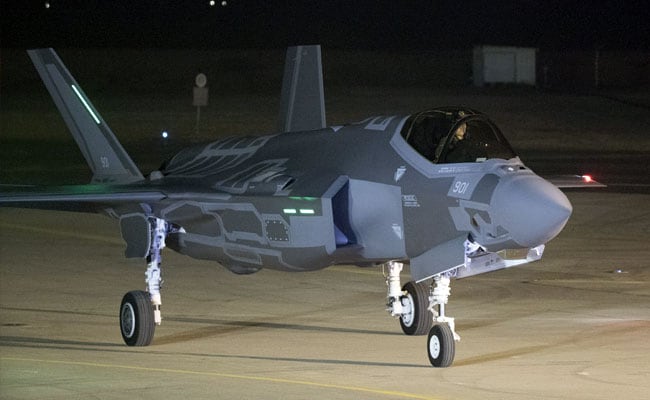 A F-35 fighter jet is seen after landing in the Israeli Nevatim Air force base. (AFP Photo)

Nevatim Air Force Base, Israel: It was supposed to be a public relations bonanza. A pair of new F-35 fighter jets were scheduled to streak across the sunny desert sky here on Monday afternoon and land to rapturous applause by Israeli and American leaders and military brass.

But first fog socked in an Italian air force base outside Milan, delaying for hours the take-off of the F-35s on the last leg of their journey from Texas to Israel.

Tired of the long wait, many of the invited guests departed, a reverse parade of military attaches heading back to their embassies, followed by television news crews who didn't think footage of airplanes landing in the dark would be terribly gripping.

Then, out of nowhere, President-elect Donald Trump decided to strafe the F-35 in a tweet on Monday.

"The F-35 program and cost is out of control," Trump wrote. "Billions of dollars can and will be saved on military (and other) purchases after January 20th," the date of his inauguration.

The two aircraft were flown by U.S. pilots, and they were greeted by Israel Prime Minister Benjamin Netanyahu and U.S. Secretary of Defense Ash Carter.

Carter said there was no better symbol of the relationship between the United States and Israel than the F-35.

"Together, we will dominate the skies," he said. "With the turmoil in the region, we're more dedicated to Israel's security today than ever before."

Netanyahu said, "Our goal is to obtain supremacy in every theater: in the air, in the sea, on the ground and cyber."

The arrival of the first F-35s should serve as a warning to Israel's opponents, the prime minister said.

The two stealthy fighter jets cost Israel around $110 million each. Israel announced that it would acquire 50 of the aircraft, which are designed to evade detection by sophisticated surface-to-air missiles and top-flight fighter planes.

In September, after months of negotiation, the Obama administration signed an unprecedented pact with Israel that will provide the Jewish state with the largest amount of military aid ever awarded, $38 billion over 10 years, with promises of the latest in missile defense systems, cutting-edge technology and fighter jets such as the F-35.

Israel is the first country to receive the F-35s. The Israeli air force hopes to have them mission ready within a year.

The deputy commander of the Nevatim Air Force Base called the F-35 more than a flying machine.

"It's a war system," said Col. Asaf, who because of security protocols would only be identified by his first name and rank.

The colonel described the airplane as a lethal combination of technology and stealth, which will be mostly invisible to enemy aircraft and ground-based anti-air batteries.

"It's a completely different ball game," said another Israeli air force commander, who briefed reporters on the condition he would not be named.

The officer said the F-35 is not faster or more agile than the F-16s and F-15s the Israelis currently fly. Nor can it carry more weapons.

"The difference is they can't see you," he said. "And by the time they do see you, they are in trouble."

Russia recently delivered advanced anti-aircraft batteries to Iran. "As far as we know nobody has flown the F-35 against the S-300s," the Russian-made surface to air missiles. "But we don't see this as a big challenge for the F-35," the air force commander said.

Jack Crisler, a Lockheed Martin vice president for business development, was on hand at Nevatim air base for the landing ceremony.

He said the F-35 was designed specifically to best the latest anti-aircraft missiles. In addition to its ability to jam enemy radar and penetrate undetected into adversary's air space, Crisler said the airplane collects and processes reams of data about the battlefield. The pilot is offered a 360-degree view, which is shown on an Israeli-designed helmet visor.

He chaffed at the suggestion that his plane can't fly in the fog.

Crisler explained that was the Italian authorities who put a halt on takeoffs during the afternoon's bout of bad weather.

The Israeli deputy commander said four Israeli pilots have been training on simulators in the United States and on Tuesday will take the two F-35s for their first flights here.

Israeli officials say the F-35 will be used for all its missions, in possible future confrontations with Iran, and the militant groups Hezbollah and Hamas.

Promoted
Listen to the latest songs, only on JioSaavn.com
This means that if Hamas and Israel fight a fourth war in Gaza, the world's most advanced fighter jet will go against an enemy who makes homemade rockets out of repurposed sewer pipes.