Woman, Son Walked 53 Hours, Passed By Corpses As They Fled From ISIS

Faryal whispered reassurances to her 5-year-old son, telling him that his grandparents were waiting and that, after four years as prisoners of the Islamic State, they were finally going home. He wouldn't believe her. 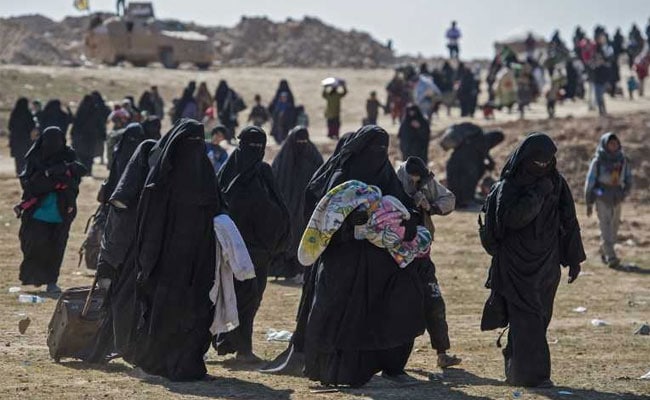 Many women and girls committed suicide in the opening months of captivity, say Yazidi rights groups

The walk to freedom lasted 53 hours, and the little boy cried all the way. It wasn't their first escape attempt - she'd tried five times before to flee the Islamic State - but they would be shot on the spot if the militants caught them now.

They passed corpses in the darkness, and when exhaustion overwhelmed them, they huddled together and slept on the dusty path. Faryal whispered reassurances to her 5-year-old son, telling him that his grandparents were waiting and that, after four years as prisoners of the Islamic State, they were finally going home. He wouldn't believe her.

"He was terrified," she said, recounting their escape this month. "I held his hand and we just kept walking."

As members of Iraq's Yazidi minority, a largely Kurdish-speaking religious group, the pair had escaped what the United Nations has called a genocide. Islamic State militants kidnapped thousands of Yazidis on a single day in August 2014, massacring the men and dumping them in mass graves, and forcing the women into sexual slavery.

During her captivity, Faryal said she had six different owners, at times being passed on when a fighter wanted a new sexual partner or simply to settle a debt. "Monsters who treated us like animals," is how she described them.

The atrocities committed against the Yazidis had initially prompted the United States to launch airstrikes against the militants and begin a military campaign to roll back the Islamic State's caliphate that now, four years later, could end within days. U.S.-backed forces have the last Islamic State holdouts surrounded in the eastern Syrian hamlet of Baghouz.

In photographs, taken by aid workers on the night of her escape, a male companion hides his face but Faryal looks straight out at the camera. Her hazel eyes are fixed in a quiet stare. Her son's face is wet with tears, and he's sobbing. "I can't put into words how I was feeling at that moment," she said. "All I could think was: 'Please, take me away from here.' "

Faryal, 20, told her story last week in the northern Syrian town of Amuda after being transferred there by the U.S.-backed Kurdish forces that rescued them. Throughout the interview, she kept a watchful eye on Hoshyar, her son, pulling him close as he cried and then trying, without success, to make him laugh. Details of her account were corroborated by members of her family in northern Iraq and through a team of Yazidi activists that had communicated with her secretly for months before the escape in attempts to smuggle her to safety.

The day before Faryal's life changed forever in 2014 had dawned like any other in the Iraqi village of Tel Banat. She puttered around the house looking after her infant son Hoshyar, she recalled. By midday, the sun was roasting, and although rumors had swirled for weeks that Islamic State forces were drawing closer, few in Tel Banat were aware of the coming storm.

The Islamist militants arrived at dusk.

"We couldn't run fast enough," Faryal remembered, describing how she and 10 members of her extended family had piled into a car and joined an epic exodus. Yazidi towns and villages around Mount Sinjar in northern Iraq emptied within hours as more than 100,000 people fled to higher ground. Faryal and her husband, Hashem, made it only a few miles before militants blocked their path.

Yazidis have long faced persecution from more powerful religious groups for their beliefs, in part because of a false but commonly-held impression that they worship the sun, or the devil. There are fewer than 1 million Yazidis worldwide, and according to the United Nations, the Islamic State had intended to entirely wipe out those within their reach.

Yazidi men and boys who had reached puberty were separated from the women and other children and often shot dead at roadsides. Women were bused to temporary holding sites and then sold to Islamic State fighters at slave markets.

Islamic State clerics had decided that having slaves was religiously sanctioned, institutionalizing sexual violence across their caliphate. Women have reported being tied to beds during daily assaults. They were sold from man to man. Gang rape was common.

Many women and girls committed suicide in the opening months of captivity, according to Yazidi rights groups. Others harmed themselves to appear less appealing to fighters who might consider buying them.

Faryal recalled that an Islamic State fighter who was Iraqi and called himself Abu Kattab was her worst abuser. Hoshyar was abused, too, Faryal said. Abu Kattab beat him so badly there were hand prints on his face. Another had forced the boy's arm onto a hot plate.

"He was so small, but for some reason the fighters hated him," Faryal said. "I could never explain to him why."

As the boy sat beside his mother last week, his eyes moved slowly from side to side as if scanning the room for threats. His blond hair was cut in jagged chunks. He did not speak and he did not smile.

At its height in 2014, the Islamic State's self-proclaimed caliphate covered territory in Syria and Iraq the size of Britain, and the movement drew recruits from around the world. In the intervening years, thousands of Yazidi women fled the territory held by the militants, but Faryal couldn't escape.

With each unsuccessful attempt to escape, the punishment grew harsher, she said. By 2017, she said, she had given up. Keeping her head down and accepting the abuse seemed the only way to keep Hoshyar alive, and the child was fraying badly. Their owners starved him and often forbade him to go to the toilet.

"I knew that if I fought back, they would take him from me forever," she said. "They did that to so many women."

There was one final act of resistance, though: a tattoo of her husband's name, inked in kohl and water on the back of her right hand. It took five days to complete, and the pain lasted even longer. It was, she sometimes told herself, a reminder of a life that could still be hers. Other times, she lost all hope.

In its final months, as the caliphate shrank to a sliver, her captors were moving weekly to outrun U.S. airstrikes. But the U.S.-backed Syrian Democratic Forces were closing in.

Food supplies ran so low that Faryal said she sometimes went days without eating, spending her money instead on small sandwiches for Hoshyar.

When the pair was struck by shrapnel in the Syrian hamlet of Baghouz in January, no medical care was available. The village clinic had been abandoned, left littered with empty drug packets and syringes.

"We were pushed out onto the street, still bleeding. There were no drugs left, and we saw people in the road being left for dead," she said. Men believed to be from Islamic State and their families leave the embattled holdout of Baghouz, Syria

Their chance to escape came when several Islamic State fighters grew desperate and plotted to use Faryal and Hoshyar as their ticket out. After years of abusive behavior, the militants decided to style themselves as the Yazidis' guardians and surrender to the forces surrounding their last stronghold.

At 2:30 one afternoon, they all set out from their tent in Baghouz. An Uzbek fighter and his family pushed the young mother out in front of them as they started down the dusty path. They walked for two days in the cold, following the only path out of what had once been the caliphate.

At 8 p.m. on the second day, they heard shouting. Beams from flashlights bounced off the sky. It was the U.S.-backed soldiers.

The Islamic State fighters raised their hands above their heads and cried out for mercy. They claimed that they were helping a Yazidi escape and had kept her safe, according to someone present at the screening point that night. The appeal fell on deaf ears, and the men were detained as Faryal and Hoshyar carried on walking.

It took three days for the pair to finally believe they might be free. They still fear that the extremists will come back for them.

"As long as I'm alive, I'll be scared of them," Faryal said, tensing her shoulders as she gripped her tattooed hand with the other. "My spirit might be strong, but my mind will never rest.