ISIS Claims Responsibility For Bombings Near Shrine In Damascus 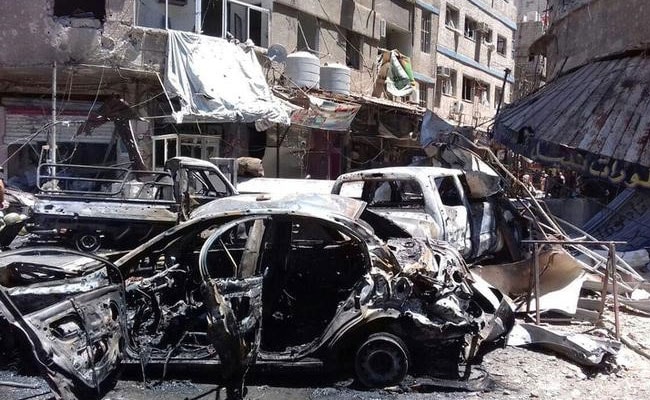 Damaged vehicles are seen at a site after a suicide and car bomb attack in south Damascus suburb of Sayeda Zeinab in Syria. (Reuters file photo)

Amman: ISIS claimed responsibility for suicide and car bomb blasts that struck a Damascus suburb on Saturday near Syria's holiest Shia Muslim shrine, and a monitoring group said at least 20 people were killed.

State television showed debris, mangled cars and wrecked shops in a main commercial thoroughfare near the Sayeda Zeinab shrine, in an area where at least three bomb attacks claimed by ISIS have killed and wounded scores of people this year.

The ultra-hardline Sunni terrorists of ISIS, whose many foes are advancing on a number of fronts in both Syria and Iraq, are avowed enemies of Shias, whom they consider a heretical group within Islam.

State media said at least eight people were killed. But the UK-based Syrian Observatory for Human Rights said the death toll had risen to at least 20, including at least 13 civilians, with the other victims coming from pro-government militias. It said the number was expected to rise because many of the scores of wounded people were in critical condition.

ISIS, also known as Daesh, said two of its suicide bombers had blown themselves up and operatives had detonated an explosives-laden car, according to the ISIS-affiliated Amaq news agency.

US State Department spokesman John Kirby said Washington condemned the attack in the strongest terms. "This terrorist act demonstrates once again the inhumanity and brutality of all that Daesh does and all it stands for," he said.

The Sayeda Zeinab shrine is a magnet for thousands of Iraqi and Afghan Shia militia recruits who go there before being assigned to front lines, where they fight against the Sunni rebel groups trying to topple President Bashar al-Assad. Almost every Shia militia fighter bears insignia on his combat fatigues with the words "For your sake, Sayeda Zeinab".

The heavily garrisoned area near the shrine is also a well known stronghold of Lebanon's powerful Shia Hezbollah group, an Iranian-backed movement that is one of Assad's chief allies.

Non-jihadist rebels say Iran's strong military intervention on the side of Assad, alongside its backing of other Shia militias, is fuelling the sectarian dimension of the nearly six-year Syrian civil war by drawing even more radical foreign Sunni jihadists into the country.

Separately, US-backed Syrian forces made new territorial gains against ISIS on Saturday, moving closer to another of its major strongholds in northern Syria, according to the monitoring group.

The Observatory said the Syria Democratic Forces (SDF), bringing together Kurdish and Arab fighters, were now almost 17 km (10 miles) from the city of al-Bab, an ISIS stronghold north east of Aleppo.
The SDF on Friday cut off the last route into the encircled town of Manbij from al-Bab after over a week of advances around that area, allowing it to lay siege to the large town from all directions, the monitor said.

In other frontlines in northern Syria, two rebel sources said Russian and Syrian jets stepped up their relentless aerial bombing of their positions in the northern city of Aleppo.

They said fighters had overnight repelled a major Syrian army attack on the Malah front in an drive to reach the strategic Catello highway, which is the only route in and out of rebel-held areas.

The army has for months sought to advance towards the highway to lay siege to rebel-held areas where over 400,000 people live.

A convoy of aid from the International Committee of the Red Cross entered the rebel-held city of Houla in the province of Homs, the third besieged area to receive supplies in the past 24 hours, aid workers said.

On Friday, aid convoys reached two rebel-held towns near Damascus, marking the first delivery of food supplies to Daraya since 2012, after the government granted permission for the trips, the United Nations said.
© Thomson Reuters 2016