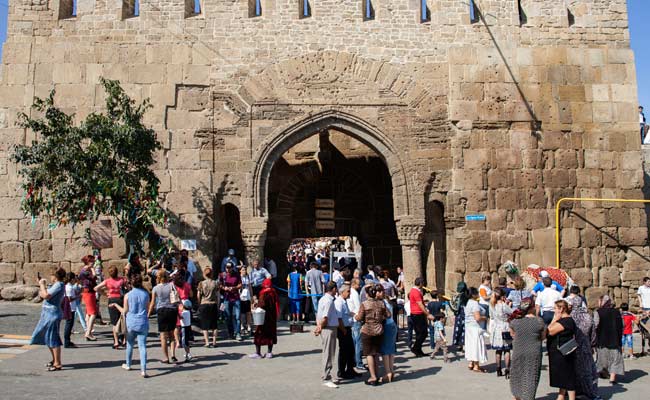 A file picture taken on September 19, 2015 shows people walking in front of the Naryn-Kala Fortress in Derbent. (AFP Photo)

Moscow: The ISIS has claimed responsibility for a shooting at an ancient citadel in Russia's volatile North Caucasus region of Dagestan that killed one and injured 11, the SITE Intelligence Group said.

"With the help of Allah, the warriors of the Khalifate were able to attack a group of Russian special service officers in the city of Derbent in southern Dagestan, killing one officer and injuring the others," the terrorist monitoring organisation SITE quoted ISIS as saying on Wednesday.

The deadly attack took place on Tuesday night near the citadel of Derbent, which claims to be Russia's oldest city, and which this year celebrated its 2,000th anniversary.

Islamist rebels in Dagestan, a restive region just east of Chechnya, have been increasingly flocking to join ISIS, which in June declared it had established a franchise there.

Syria's Al-Qaeda affiliate Al-Nusra Front had called on jihadists from the Caucasus to perpetrate attacks in Russia in response to Moscow's bombing campaign in the country.

The shooting took place as Russian warplanes wrapped up two days of intensive bombing raids over Syria, carrying out 121 sorties in which they hit 424 targets, the military announced on Wednesday.

The attack targeted Russian security forces, with an unnamed source telling RIA Novosti state news agency that a member of the Federal Security Service (FSB) had been killed and another injured in the shooting.

The gunmen, who were reportedly in the forest, opened fire at people standing by the fortress, which was declared a UNESCO World Heritage site in 2003.

Located on the southeastern shore of the Caspian Sea, Derbent served as a strategic port city at the crossroads of empires and was incorporated into the Russian empire in the 19th century.

The Kremlin is currently fighting a deadly insurgency against Islamist rebels in the largely Muslim North Caucasus, with unrest particularly intense in Dagestan.

At least 118 people were killed there between January and November as a result of the conflict, according to the Caucasian Knot news portal, which monitors militancy in the North Caucasus.

Moscow has said part of the reason why it began operating over Syria was to prevent ISIS terrorists and other extremists from perpetrating attacks on Russian soil.

According to FSB figures released earlier this month, nearly 2,900 Russians are fighting or have fought with the extremist terrorists in Iraq and Syria.

How The EHT Super-Telescope Snapped The Supermassive Black Hole