Is It Napoleon's? Battlefield Hat For Sale In France

While the hat's provenance cannot be confirmed without a doubt, it has traditionally been attributed to the emperor, with records confirming its ownership since a Dutch captain took it as a war trophy at Waterloo in 1815. 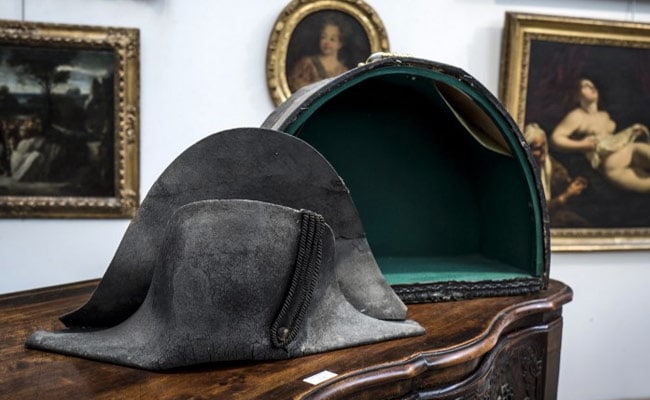 Lyon, France: A two-cornered military dress hat said to belong to Napoleon and purportedly picked off the battlefield after his defeat at Waterloo will go under the hammer Monday at an auction in France.

It is the latest sale looking to capitalise on the seemingly insatiable appetite for items belonging to the former French emperor, who remains a source of fascination nearly two hundred years after his death.

Napoleon insisted on wearing the hats sideways -- rather than with points at the front and back -- so he could easily be spotted on the battlefield.

During his 15 years in power he reportedly went through about 120 of the black felted beaver fur "bicorne" hats, most of them made by French hatmakers Poupard, though only a handful of confirmed examples still exist.

"They must correspond in terms of dates, and the size of his head," Etienne De Baecque, the auctioneer leading the sale in the eastern city of Lyon, told AFP.

While the hat's provenance cannot be confirmed without a doubt, it has traditionally been attributed to the emperor, with records confirming its ownership since a Dutch captain took it as a war trophy at Waterloo in 1815.

"There are also other little details: he hated the trimming and always had it removed; he requested reinforcements at certain points where he always held it," De Baecque said.

"But as always with historical souvenirs, there's an element of fascination as well as doubt."

Four years ago a similar bicorne, part of a collection owned by Monaco's royal family, sold at auction for 1.9 million euros ($2.2 million at current rates) to the owner of the South Korean food and agriculture giant Harim.

The hat being sold Monday is expected to fetch just 30,000 to 40,000 euros, in part because it has not been as well preserved, with the leather dried out and cracking in several places.

Promoted
Listen to the latest songs, only on JioSaavn.com
Yet demand for all things Napoleon has often sent prices spiralling well above estimates.

Last November a fragile gold laurel leaf from the crown made for Napoleon's coronation in 1804, weighing just 10 grams, was sold for 625,000 euros.