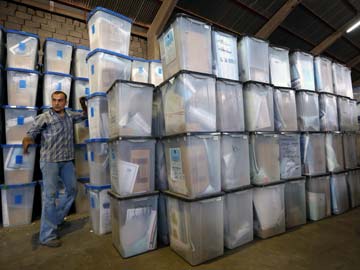 An employee stacks ballot boxes ahead of the upcoming parliamentary elections, at an election center in Arbil, the capital of the autonomous Kurdish region of northern Iraq.

Baghdad: Iraqis will vote on Wednesday in the first national election since US troops left, amid deepening sectarian divisions and fears the country is on the brink of all-out bloodshed.

The month-long campaign has seen Baghdad and other cities plastered with posters and decked out in bunting, as candidates have taken to the streets, staged loud rallies and challenged each other in angry debates.

Attacks on candidates, election workers and political rallies have cast a shadow over the election, and parts of the country that have been out of government control for months will not see any ballots cast.

Many shops in central Baghdad have been boarded up and authorities have announced a week's public holidays to try to bolster security for the election.

Members of the security forces will vote on Monday so they are free to guard polling stations on Wednesday.

"Any future government is going to have a serious... issue in confronting Iraq's very dynamic challenges," said Ayham Kamel, Middle East and North Africa Director at the Eurasia Group consultancy.

"Starting with security, and then on to oil, and then to communal relations with Sunnis, Shiites and Kurds, and I think the economy de facto jumps down that agenda."

Although voters have a long list of grievances, from poor electricity and sewerage services to pervasive graft and difficulties securing jobs, to say nothing of near-daily violence, the election has centred around Maliki and his efforts to retain power.

His opponents, who span the communal spectrum, accuse him of shoring up his power base, while minority Sunnis in particular say the Shiite premier discriminates against them.

Maliki contends that foreign interference is behind deteriorating security and complains that he has been saddled with a unity government of groups that snipe at him in public and block his legislative efforts.

But according to analysts and diplomats, with a fractious and divided opposition and no clear replacement, he remains the frontrunner in the first national election since 2010, and the first since US troops withdrew in December 2011.

No single party is likely to win an absolute majority, however, and as in previous elections, coalition talks are likely to take months.

Maliki's State of Law alliance will face stiff competition in its Shiite heartland in central and southern Iraq from a movement linked to powerful cleric Moqtada al-Sadr and another bloc seen as close to Iran.

A variety of other communal and ethnically based parties are expected to win the vast majority of the seats in the mostly Sunni west and Kurdish north.

Unlike in previous general elections, however, no major cross-sectarian party is seen as capable of winning seats across the country.

The years-long civil war in neighbouring Syria has proven particularly divisive, with Iraq's sectarian groups largely backing their own communities and masses of Iraqis crossing the border to fight on all sides.

Illustrating the impact of the conflict in Syria, a powerful jihadist group opposed to Syrian President Bashar al-Assad on Friday killed 33 people in twin bombings at a Baghdad rally for the political wing of an Iraqi Shiite militia fighting alongside his forces.

The authorities have blamed a spillover from Syria for Iraq's surge in violence, with bloodshed at its worst since a brutal Sunni-Shiite war left tens of thousands dead.

Militants have held a town just a short drive from Baghdad for months, and security officials have said they are seeking to advance into the capital itself.

Promoted
Listen to the latest songs, only on JioSaavn.com
One reason for cheer has been the rising oil output that has swelled government coffers.

But even enthusiasm for that has been tempered because the increased exports have made little impact on employment and voters complain much of the revenue is lost to graft.