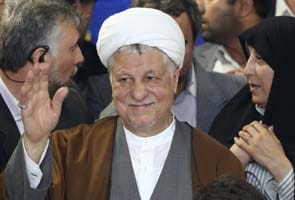 Eight candidates won approval to stand -- five conservatives close to supreme leader Ayatollah Ali Khamenei, as well as two moderate conservatives and a reformist, the ministry said in a statement.

No explanation was given for the disqualifications by neither the interior ministry nor Iran's electoral watchdog, the Guardians Council which is officially tasked with vetting candidates.

The council is comprised of religious conservatives who are all directly or indirectly appointed by Khamenei.

A heavyweight until eight years ago when incumbent President Mahmoud Ahmadinejad beat him in the 2005 presidential election, Rafsanjani has fallen from the grace in the Islamic regime in recent years.

In 2009, he openly questioned the handling of the 2009 presidential election, which provoked massive street protests on claims of fraud.

Mashaie, the other disqualified candidate, is a close aide to Ahmadinejad and was personally endorsed by the president. But he is seen as too liberal and a danger to the Islamic revolution.

Promoted
Listen to the latest songs, only on JioSaavn.com
The moderate-conservatives approved are another former nuclear negotiator, Hassan Rowhani, and Mohammad Gharazi, an ex-minister who served under Rafsanjani and under-house-arrest opposition leader Mir Hossein Mousavi.

The marginalised reformists will have only one candidate - Mohammad Reza Aref.