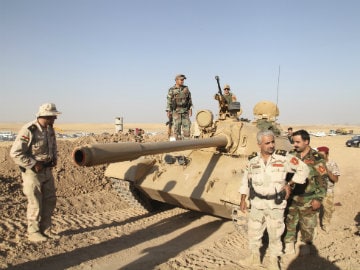 The direct arming of Kurdish forces is a contentious issue, because some Iraqi politicians suspect Kurdish leaders have aspirations to break away from the central government completely. The move could also be seen by some as a prelude to Iran's taking a more direct role in broader Iraqi conflict.

"We asked for weapons and Iran was the first country to provide us with weapons and ammunition," Barzani said.

Militants from the Islamic State have clashed with Kurdish peshmerga fighters in recent weeks and taken control of some areas on the periphery of Iraqi Kurdistan.

Earlier in the day, a car bomb was detonated in a mainly Shi'ite district of eastern Baghdad, killing 12 people and wounding 28, police and medical sources said. The bombing in the New Baghdad neighbourhood followed a series of blasts in the Iraqi capital on Monday which killed more than 20 people.

The Islamic State, which controls large swathes of northern and western Iraq, claimed responsibility for a suicide bombing in the New Baghdad neighbourhood on Monday. It said in a statement the attack was carried out as revenge for an attack against a Sunni mosque in Diyala on Friday which killed 68 and wounded dozens.

The U.N. Human Rights Council will hold an emergency session in Geneva on Monday concerning abuses being committed by Islamic State and other militant groups in Iraq, the United Nations said on Tuesday.

The 47 member states of the forum have moral authority to condemn abuses or set up international investigations into war crimes or crimes against humanity, but they cannot impose binding resolutions

The Iranian foreign minister held talks with Barzani on Tuesday, one day after visiting senior Shi'ite clerics in southern Iraq. Zarif acknowledged giving military assistance to Iraqi security forces but said the cooperation did not include deploying ground troops in the country.

"We have no military presence in Iraq," Zarif said. "We do have military cooperation with both the central government and the Kurds in different arenas."

Promoted
Listen to the latest songs, only on JioSaavn.com
The United States has carried out a series of air strikes against the Islamic State fighters in northern Iraq in the past two weeks, partly to protect the Kurdish region from being overrun.

Zarif denied that Iran and the United States were discussing Iraq as part of talks between Iran and Western powers about Iran's nuclear program.
© Thomson Reuters 2014