Iran Nuclear Deal: Ebrahim Raisi's comments came as Tehran reviews the US response to its suggestions on a "final" text put forward by the EU to salvage the landmark deal. 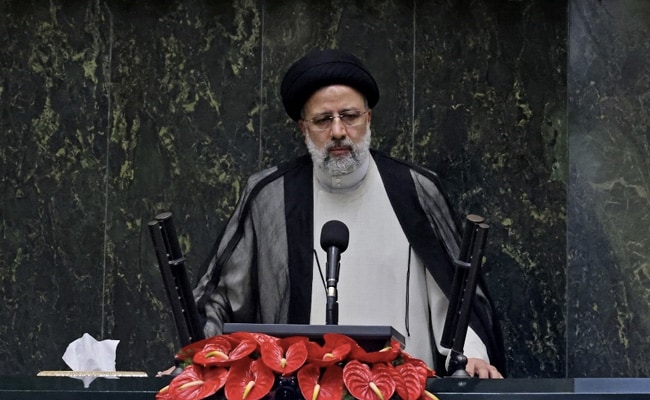 Iran Nuclear Deal: All of the safeguard issues must be resolved, President Ebrahim Raisi told.

Iran's president said Monday that reviving a 2015 atomic deal with world powers would be pointless unless the UN nuclear watchdog put an end to its probe of undeclared sites in the country.

Ebrahim Raisi's comments came as Tehran reviews the US response to its suggestions on a "final" text put forward by the EU to salvage the landmark deal.

The United States had been adamant that Tehran cooperate with the International Atomic Energy Agency (IAEA) to clear up suspicions about earlier work at three undeclared sites.

"Without resolving the safeguard issues, talking about the agreement is meaningless," he added.

The IAEA has referred to the traces of nuclear materials as a "safeguards" issue.

Iran has repeatedly urged the agency to end the issue before any revived deal is implemented, but US State Department spokesman Vedant Patel on Thursday said "we do not believe there should be any conditionality" between the deal and undeclared sites.

In June, the IAEA's board of governors adopted a resolution censuring Iran for failing to adequately explain the previous discovery of traces of enriched uranium at three sites not declared by Tehran as having hosted nuclear activities.

Last week, amid rising hopes of a revived deal, IAEA chief Rafael Grossi, in an interview with CNN, rejected the idea of the agency closing its probe without receiving answers.

"This idea that politically we are going to stop doing our job is unacceptable for us," he said. "So far Iran has not given us the technically credible explanations we need."

In his latest report to IAEA member states on the implementation of the 2015 deal, Grossi on Monday said Iran had begun enriching uranium in one of three recently installed centrifuge cascades in Natanz.

The agreement between Iran and six world powers -- Britain, China, France, Germany, Russia and the United States -- gave the Islamic republic sanctions relief in exchange for curbs on its nuclear programme.

Since taking office in 2021, President Joe Biden has sought to return the United States to the deal unilaterally abandoned by his predecessor Donald Trump in 2018.

The Vienna talks, which began in April last year, aim to return Washington to the nuclear pact, including through the lifting of sanctions on Iran, and to return Tehran to full compliance with its commitments.

The indirect negotiations between Tehran and Washington have so far been carried out through the mediation of the European Union.

Raisi reiterated his opposition to meeting with Biden during the UN General Assembly next month.

"There's no benefit in a meeting between me and him... There is no plan for such a meeting and there will not be any," he added.

Israel, Iran's arch-enemy, has been pushing its ally, the United States, as well as other Western countries to stop the nuclear negotiations with Tehran.

Israeli Prime Minister Yair Lapid on Sunday said any new agreement with Tehran would have to include an expiration date, and tighter supervision that would also "address Iran's ballistic missile programme".

"We can reach such an agreement if a credible military threat is put on the table," Lapid added.

Raisi said that actions by Israel including "the assassination of (Iranian) nuclear scientists" and "acts of sabotage" against nuclear facilities could "not stop" Iran's nuclear programme.

He also warned Israel that it "may not have the time to act if it decides to do something" against Iran.

The 2015 deal, known formally as the Joint Comprehensive Plan of Action, aimed to prevent Iran from developing a nuclear weapon -- something it has always denied wanting to do.

"Nuclear weapons have no place in our defence doctrine," Raisi stressed.