On Friday, Donald Trump had posted on Twitter a detailed aerial image of an Iranian launchpad that showed extensive damage, the apparent result of a failed rocket launch earlier in the week. 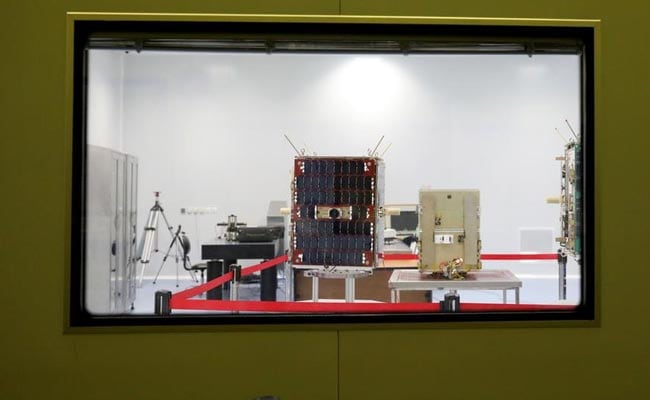 Iran on Saturday displayed for reporters what it said was an intact satellite ready for orbit, hitting back against President Donald Trump's comments suggesting a "catastrophic accident" had delayed its launch.

Officials presented the satellite, Nahid-1, at a space research center in Tehran, where it is awaiting the preparation of a rocket launcher, Iranian media reported. Iran has successfully sent several satellites into orbit in recent years.

"The latest tests. . . have been carried out, and the satellite will be delivered as soon as the launcher is ready," Iran's Information and Communications Technology Minister, Mohammad Javad Azari Jahromi, told Iran's state broadcaster.

Earlier Saturday, the minister posted a photo of himself next to the satellite on Twitter.

On Friday, Trump had posted on Twitter a detailed aerial image of an Iranian launchpad that showed extensive damage, the apparent result of a failed rocket launch earlier in the week.

"The United States of America was not involved in the catastrophic accident during final launch preparations" at the space site in Iran's Semnan province, Trump said.

In a taunting jab, he added: "I wish Iran best wishes and good luck in determining what happened" at the site.

The United States has criticized Iran's space program as a cover for ballistic missile development. Iran maintains that its satellite launches are not linked to its missile program, which it says is a key element of its national defense strategy.

The controversy over the satellite comes as the Trump administration has ramped up its pressure on Iran to negotiate everything from its nuclear activities to ballistic missiles and its support for militant proxy forces in the Middle East.

Trump abandoned a 2015 nuclear deal - signed by Iran and world powers - that curbed Tehran's atomic energy activities in exchange for major sanctions relief. His administration re-imposed a near-total embargo on Iran and has sought to completely halt its oil exports.

Also Friday, the Treasury Department's Office of Foreign Assets Control (OFAC) announced new sanctions on an Iranian oil tanker in the Mediterranean. The tanker, Adrian Darya 1, was seized near Gibraltar in July, after authorities there suspected it was headed to Syria in violation of European Union sanctions.

It was released earlier this month, despite a warrant from the U.S. Department of Justice seeking its detention. The warrant alleged an illegal scheme to access the U.S. financial system to finance Iran's sale of oil products to Syria.

In a news release Friday, OFAC said the tanker, which is carrying 2.1 million barrels of light crude oil, was being identified as "blocked property" for enabling Iran's Islamic Revolutionary Guard Corps to ship and transfer oil to Syria, an ally of Iran. OFAC also targeted the tanker's captain, Akhilesh Kumar.

"We have reliable information that the tanker is underway and headed to Tartus, Syria," Secretary of State Mike Pompeo said Friday on Twitter.

The vessel has been sailing through the Mediterranean Sea since it departed Gibraltar, a British overseas territory, two weeks ago.

(Except for the headline, this story has not been edited by NDTV staff and is published from a syndicated feed.)
Comments
Nahid-1IranDonald Trump