In South America, the large-bodied lizards range widely east of the Andes and include species such as the Argentine black and white Tegu. 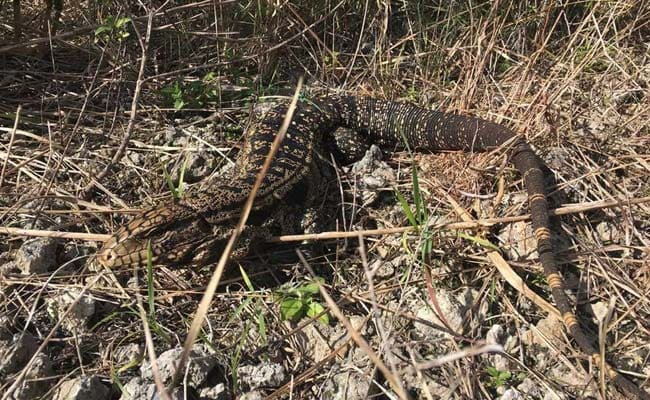 A group of South American lizards that can grow up to four feet long (1.2 meters) has established a home in the Florida wild after being brought to the United States as pets, and the reptiles could begin a voracious march across the US South, according to a new study.

Tegu lizards, which currently live in two large colonies in Florida, could expand into an area from the Carolinas to Central Texas, according to the scientific report published in July on the website for the journal Nature.

"They are voracious, omnivorous predatory lizards that can live in a variety of habitats, but we can't know what is going to happen or how intense this invasion is going to become until the effects are upon us," said Lee Fitzgerald, a professor at Texas A&M University and curator of its Biodiversity Research and Teaching Collections.

Fitzgerald, a co-author of the study, said in an interview this week it could take years for the Tegu lizards to reach their potential range, but new hot spots pop up as more pet lizards escape or are dumped in the wild by owners.

There are no current estimates of wild populations of Tegus in the United States. In South America, the large-bodied lizards range widely east of the Andes and include species such as the Argentine black and white Tegu.

Armed with strong jaws and tails that they can wield as thumping weapons, the lizards in Florida devour the eggs of American alligators and ground-nesting birds, wildlife officials said. The reptiles also have a taste for insects, fruit and birds.

"As far as being a damaging invasive species, it really depends on what the threatened resources are in the areas where you might get tegus," said Robert Reed, chief of the Invasive Species Science Branch at the U.S. Geological Survey, and another report co-author.

Tegu owners describe their pets as big, calm and occasionally affectionate lizards that like sunning themselves and are not picky about what they eat. But they can also be ornery and tough to handle.

In Florida, local wild populations of breeding tegu lizards are found in at least two counties, Miami-Dade and Hillsborough, home to Tampa, while there have been sightings in other parts of the state, according to the Florida Fish and Wildlife Conservation Commission.

On private lands, Florida hunters without a license are allowed to kill tegu lizards if it is done humanely. On public lands, the state is trying to get rid of the lizards through traps.

"The most important thing that the public can do to stop the spread of nonnative species like tegus is to NEVER release nonnative animals into the wild," commission specialist Jamie Rager said in an email. "Don't let it loose."