During his brief appearance on Tuesday, Brandon Scott praised Joe Biden for planning to increase the funding for public schools and historically Black colleges and universities. 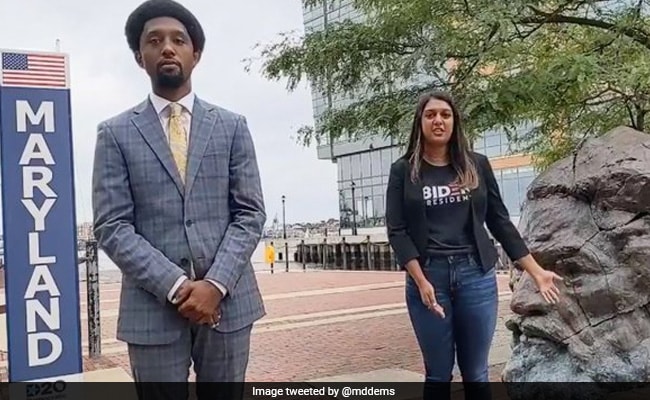 An Indian-origin student has joined Baltimore City Council president and mayoral candidate Brandon Scott to represent the US state of Maryland during the roll call at the 2020 Democratic National Convention that nominated Joe Biden as the party's presidential candidate.

During his brief appearance on Tuesday, Scott praised Biden for planning to increase the funding for public schools and historically Black colleges and universities.

"When Joe Biden rebuilds our middle class, he won't leave anyone behind," Shah said.

Biden will work to end racial discrimination, she said in the roll call segment broadcast on national television.

The segment was recorded in front of a statue of Frederick Douglass, a social reformer who fought for the abolition of slavery.

The virtual convention, which was supposed to be held in Milwaukee until plans changed due to the coronavirus, kicked off on Monday night.

Scott then announced Maryland was awarding one vote to Bernie Sanders and 119 for Biden.

The roll call vote process is traditionally a long affair with each delegation in the convention arena going around and pledging delegates to candidates.

On Twitter, Scott wrote the election is about getting the country back on track and that the convention is one important step in getting there.

"I will recognise great Marylanders like Harriet Tubman and Frederick Douglass, and cast the delegates for the next President of the United States, Joe Biden," he added.

Tubman was an American political activist. Born into slavery, Tubman escaped and subsequently made some 13 missions to rescue approximately 70 enslaved people, including family and friends.