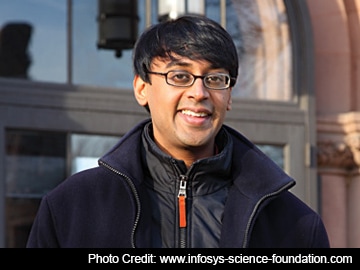 New York: Two Indian-origin academicians have won prestigious global prizes in the field of mathematics with one of them being awarded the Fields Medal - known as the "Nobel Prize of mathematics".

Manjul Bhargava, a professor of mathematics at Princeton University, was among the four winners who have been awarded the Fields Medal, given out every four years.

Mr Bhargava was awarded the Fields Medal for "developing powerful new methods in the geometry of numbers, which he applied to count rings of small rank and to bound the average rank of elliptic curves."

According to the award citation, Mr Bhargava's work is "based both on a deep understanding of the representations of arithmetic groups and a unique blend of algebraic and analytic expertise."

Subhash Khot was awarded the Nevanlinna Prize for his "prescient definition of the 'Unique Games' problem, and leading the effort to understand its complexity and its pivotal role in the study of efficient approximation of optimisation problems."

His work has led to breakthroughs in algorithmic design and approximation hardness and to new exciting interactions between computational complexity, analysis and geometry.

Mr Khot is a professor in the Computer Science Department at New York University's Courant Institute of Mathematical Sciences. He has a PhD from Princeton.

Born in 1974 in Canada, Manjul Bhargava grew up in the US and also spent much time in India. He received his PhD in 2001 from Princeton University and became a professor in 2003.

Mr Bhargava's honours include the Merten Hasse Prize of the Mathematical Association of America (2003), the SASTRA Ramanujan Prize (2005), the Cole Prize in Number Theory of the American Mathematical Society (2008) and the Infosys Prize (2012).

He was elected to the US National Academy of Sciences in 2013.

The Fields Medals were started in 1936 and the Nevanlinna Prize in 1982.

The Fields Medal is awarded on the occasion of the International Congress of Mathematicians to recognise outstanding mathematical achievement for existing work and for the promise of future achievement.

The candidates in fray for the medal must be below the age of 40.

Promoted
Listen to the latest songs, only on JioSaavn.com
The Rolf Nevanlinna Prize is awarded once every four years at the International Congress of Mathematicians, for outstanding contributions in Mathematical Aspects of Information Sciences including all mathematical aspects of computer science, including complexity theory, logic of programming languages, analysis of algorithms, cryptography, computer vision, pattern recognition, information processing and modelling of intelligence as well as scientific computing and numerical analysis.