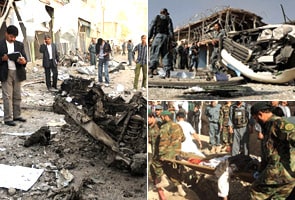 New York: A week before the 2008 Indian embassy bombing in Kabul, Polish intelligence had warned of a possible Taliban attack on Indian mission in the Afghan capital, according to leaked intelligence documents.

The document on possible attack on the Indian Embassy is part of a massive leak of 92,000 intelligence reports that suggested that the war in Afghanistan is going badly for the US, and Pakistan's Inter-Services Intelligence (ISI) is fuelling the insurgency in the war-torn country.

Advance copies of the leak were made available to three publications - The New York Times, British daily newspaper Guardian, and German weekly Der Spiegel, which made some excerpts available.

The document dealing with the Indian Embassy is titled 'Threat Report... Threat to Indian Embassy.' The date of information is June 30, 2008, while the date of report is July 1, 2008. The organisation involved is "Taliban Centre" and the Report number is 75010708.

"Taliban are planning to carry out an attack on the Indian embassy in Kabul. TB (Taliban) designated an engineer____ to take this action," the document reads.

He speaks Dari with distinct Iranian accent. Allegedly, he is the owner of a ___ company," it added.

A suicide bomber rammed an explosives-laden car into the heavily fortified Indian embassy gates in Kabul on July 7, 2008, killing 58 people and wounding more than 140.

"INS (Insurgents) are planning to divide into two groups: first will attack Indian embassy building, whilst the second group will engage security posts in front of MOI (Ministry of Interior), IOT (In Order to) give possibility to escape attackers from the first group," the report said.

"Budget for this action is about USD 1,20,000. The main goal of this operation is to show TB's (Taliban) abilities to carry out attack on every object in Kabul."

Other documents strongly indicate that Pakistan's ISI is supporting the insurgency in Afghanistan, as well as plotting with Taliban leaders to assassinate Afghan leaders.

The New York Times pointed out that it has been difficult for the US to pin Pakistan's spy agency directly to an attack orchestrated by the Taliban.

But the assault on the Indian embassy led the CIA's then deputy director Stephen R Kappes to immediately go to Islamabad to confront the ISI with evidence that it had helped organise the attack.

Another leaked document, dated August 2008, identifies a Colonel in the ISI plotting with a Taliban official to assassinate Afghan President Hamid Karzai.

However, there were no accompanying details and the report could not be verified.

Meanwhile, US National Security Advisor James Jones, in a statement, condemned the leaks as "irresponsible" and said that WikiLeaks had not contacted the US government before going public.

Promoted
Listen to the latest songs, only on JioSaavn.com
"The United States strongly condemns the disclosure of classified information by individuals and organisations which could put the lives of Americans and our partners at risk, and threaten our national security," Jones said.