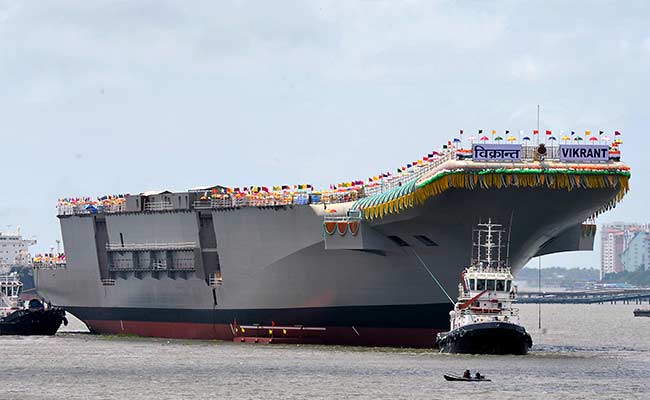 INS Vikrant leaves the dock of the Cochin Shipyard after the launch ceremony in Kochi last year. (Agence France-Presse)

New Delhi:
India wants to use state-of-the-art US technology to boost the range and potency of a planned aircraft carrier, defence sources said, in a move that would tie their arms programmes closer together and counter China's military influence in the region.
The proposal, referred to only obliquely in a joint statement at the end of President Barack Obama's recent visit to New Delhi, is the clearest signal yet that Washington is ready to help Indiastrengthen its navy.
Although the aircraft carrier in question would not be ready for at least another decade, such cooperation could act as a balance against China's expanding presence in the Indian Ocean.
It would also represent a shift away from India's traditional reliance on Russian military hardware, particularly if, as some experts expect, it leads to knock-on orders for US aircraft in the longer term.
After years of neglect, India's navy is in the midst of accelerated modernisation under Prime Minister Narendra Modi.
It inducted an old aircraft carrier from Russia in 2014 to add to an ageing British vessel likely to be decommissioned in 2018. Last year, soon after taking office, Modi cleared funds to ensure another carrier being built domestically was ready for service in 2018.
He also endorsed navy plans for a further carrier which would be its biggest, and it is this one that may be built with US technology, a defence ministry source and two former navy vice admirals with ties to the naval establishment said.
The joint statement by Obama and Modi spoke of a "working group to explore aircraft carrier technology sharing and design" as part of the Defense Trade and Technology Initiative.
Defence officials said this could lead to direct US participation in building the 65,000-tonne INS Vishal carrier.
"The US navy is the only one that operates large carriers today, so we are looking at what they can offer, what is possible," the defence source said.
MORE, BIGGER AIRCRAFT
Former vice admiral Arun Kumar Singh said naval planners want a carrier that can launch heavier planes, and the only way to do that is from flat decks which US carriers have instead of Russian "ski-jump" decks.
"The Americans, I believe, have said 'ok, we will help you design a ship and you also buy our catapults' to launch aircraft," he said.
Former rear admiral Ravi Vohra said the Indian navy's ultimate objective was a five-carrier fleet comprising a mix of large and small carriers.
At the heart of the proposed collaboration is a US offer to share the Electromagnetic Aircraft Launch System (EMALS) developed by General Atomics and which is now being installed on the Gerald R. Ford class of carriers that are joining the navy.
The new system means jets can launch off a flat deck at a faster rate and with less fatigue to aircraft.
US defence and industry officials said sensitivities over selling advanced EMALS technology toIndia meant any major movement on the carrier question was unlikely in the near term.
Two sources familiar with the issue added that the US response to Indian overtures had been cool until very recently.
"Things are finally beginning to look a lot more positive," said one of the sources, who was not authorized to speak publicly.
For India it is a big leap. Its existing carrier force uses ski-jump ramps to help planes take off and brings them in using wires to slow them down. For that reason, planes have to be lighter and are fewer in number.
With an EMALS system on a flat deck, India's navy planners hope to increase the number of aircraft on board the INS Vishal to 50 from 34 and field heavier fighter jets with longer reach as well as airborne early warning aircraft.
"EMALS is one of the most revolutionary things in carrier technology because it completely changes the way you fire a plane off the top of a ship," said James Hardy, Asia-Pacific Editor for IHS Jane's Defence Weekly.
"The Chinese have been talking about getting it for their carriers for a long time ... but it's quite a big technological ask."
CHINESE FORAYS WORRY INDIA
The Indian defence source said representatives of General Atomics showed the technology to members of a Naval Design Bureau working on the next-generation carrier back in 2013.
The defence ministry declined to comment.
China is operating a lone carrier, the 60,000-tonne Liaoning bought from Ukraine, but reports have circulated of a second carrier under development.
China wants to develop an ocean-going "blue water" navy capable of defending its interests as it adopts a more assertive stance in territorial disputes with neighbours in the South China Sea.
Modi has sought to improve ties with China, seeing it as a vital economic partner.
But the government has been rattled by Chinese naval forays in the Indian Ocean, including when a submarine docked last year in Sri Lanka.
Vijay Sakhuja, director of defence ministry-funded National Maritime Foundation think-tank, said US involvement in the flight-launch technology of an Indian carrier could lead to future deals for US aircraft makers.
"It is early days yet, but once we get this carrier deck technology from the US, maybe there will be a joint development of fighter jets to be operated out of it."
© Thomson Reuters 2015
Promoted
Listen to the latest songs, only on JioSaavn.com