Increasingly, Retirees Dump Their Possessions and Hit the Road 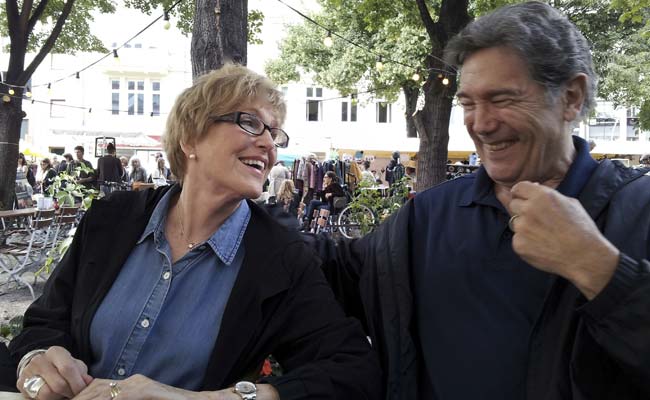 An undated handout photo of Lynne Martin and her husband, Tim, who sold their home in California and now live in short-term vacation rentals, in Berlin. (Handout via The New York Times)

Some call themselves "senior gypsies." Others prefer "international nomad." David Law, 74, a retired executive recruiter who has primarily slept in tents in several countries in the past two years, likes the ring of "American Bedouin."

They are American retirees who have downsized to the extreme, choosing a life of travel over a life of tending to possessions. And their numbers are rising.

Law and his wife, Bonnie Carleton, 69, who are selling their house in Santa Fe, New Mexico, spoke recently by phone from a campground in Stoupa, Greece, a village on the southern coast of the Peloponnese. He explained that they roam the world to "get the broadest and most radical experience that we can get."

They recently decided to fold their tent.

"Hey, we're getting to be too old for this," said Law about camping out. But they intend to continue what he termed their "endless holiday" in a more comfortable and spacious recreational vehicle.

Between 1993 and 2012, the percentage of all retirees traveling abroad rose to 13 percent from 9.7 percent, according to the Commerce Department.

About 360,000 Americans received Social Security benefits at foreign addresses in 2013, about 48 percent more than 10 years earlier. An informal survey of insurance brokers found greater demand by older clients for travel medical policies. (Medicare, with a few exceptions, does not cover expenses outside the United States). While many retirees ultimately return home or become expatriates, some live like vagabonds.

Lynne Martin, 73, a retired publicist and the author of "Home Sweet Anywhere: How We Sold Our House, Created a New Life, and Saw the World," is one. Three years ago, she and her husband, Tim, 68, sold their three-bedroom house in Paso Robles, California, gave away most of their possessions, found a home for their Jack Russell terrier, Sparky, and now live in short-term vacation rentals they usually find through HomeAway.com.

The Martins have not tapped their savings during their travels, alternating visits to expensive cities like London with more reasonable destinations like Lisbon.

"We simply traded the money we were spending for overhead on a house and garden in California for a life in much smaller but comfortable HomeAway rentals in more interesting places," Lynne Martin said by email from Paris.

On her blog, Barefoot Lovey, Stacy Monday, 50, a former paralegal and mediator who lived in Knoxville, Tennessee, wrote: "I used to dream about all the places I would go as soon as I was old enough to get away. But then ... life happened." On May 1, 2010 - like many itinerant baby boomers Monday can quickly recall the date her journey started - she embarked on her dream trip. She "crisscrossed the US three times" and visited Mexico, Ireland, France, Italy, Morocco, Spain and many other countries.

"I sold everything I had," Monday recalled earlier this summer from San Francisco before she headed to Las Vegas, Dallas, Memphis and Knoxville. "I paid off all of my debt. I have no bills and no money." She estimates that she now spends $150 a month - sometimes less if she is saving up for a flight - and earns a modest income through "odds-and-ends jobs," as well as the tip jar on her blog.

To stick to her tight budget, Monday volunteers for nonprofits and organic farms in exchange for room and board or finds free places to stay through Couchsurfing.org. The company puts its membership of people 50 and older at about 250,000.

Monday monitors ride-share boards at Couchsurfing and Craigslist for free or inexpensive transportation, and she travels light.

"I get away with a couple pairs of jeans, a pair of shorts, a skirt and four or five shirts and a pair of pajamas," she said.

When she answers the ubiquitous question "What do you do?," Monday notices that most women respond with encouragement, while many men are less supportive.

Hal E. Hershfield, an assistant professor of marketing at the University of California, Los Angeles, who studies the influence of time on consumer behavior, observes that many "pre-retirees" still assume retirement is a "decrepit, sitting-on-a-porch, maybe playing-golf, ice-tea type of life." But current retirees are "changing the way they think," he said, "because they are still healthy and sort of young at heart." In the past 50 years, retirement "wasn't this period that we spent years and years in," Hershfield continues. "It really, truly was the end of life."

Retirees today may choose a more nomadic lifestyle because they think time is on their side, suggests Cassie Mogilner, a professor of marketing at the University of Pennsylvania's Wharton School. Older adults, she finds, typically associate happiness with serene activities - sharing a meal with friends, for instance. Conversely, young people tend to derive happiness from excitement and extraordinary events. But when older people perceive a longer period of time ahead of them, they often experience happiness just like young people.

Dr. Galit Nimrod, a research fellow at the Center for Multidisciplinary Research in Aging at Ben-Gurion University of the Negev in Israel, says an extended postretirement trip can assuage a sense of loss from ending a career. Travel can "act as a neutral, transitional zone between voluntary or imposed endings and new beginnings" and "serve as a healthy coping mechanism," Nimrod said by email.

Gary D. Norton, 69, acknowledges that he felt "afraid of retirement" when he left his job of 34 years as a science professor at a South Dakota community college.

In 2002, he and his wife, Avis M. Norton, 67, a retired farmer, sold their house, bought an RV and started volunteering full time for two nonprofits: Nomads on a Mission Active in Divine Service, or Nomads, and RV Care-A-Vanners, an initiative of Habitat for Humanity.
The couple typically rebuilds houses damaged by natural disasters, projects that usually last several weeks. Gary Norton, who now specializes in drywall finishing, and his wife, who studied carpentry, say they cherish the chance to give back to society while seeing the country.

"Now what we're doing is so satisfying and fulfilling, even though we have some health issues, we say we don't want to quit," said Norton, who estimated that he and his wife have repaired damaged homes in 28 states.

The chance to volunteer on international conservation projects and the opportunity to live like a local inspired Danila Mansfield, 58, and her husband, Chris Gill, 64, to sell their house in San Jose, California, last year. They got rid of nearly everything they owned - the exceptions being two suitcases, clothing and a pair of guitars (Gill's prized Gibson ES-335 electric guitar is stowed at a friend's house but he totes around a travel guitar) - and do not even rent a storage space.

The purge of possessions was "a little nerve-racking" at first, but ultimately "hugely liberating," said Mansfield, who is currently in South Africa. She and her husband plan to volunteer on game reserves to protect endangered species and then study great white sharks..

So far, their travels have surpassed expectations. They drove from San Jose to Florida over five months, before cruising to Europe. High points included meeting a judge at a bar in Amarillo, Texas, who invited them to visit his drug court, catching crawfish with locals in Louisiana's bayou country, and making new friends in Austin, Texas, who invited the couple to stay with them in South Africa.

But Mansfield has also hit bumps in the road. In Galveston, Texas, and New Orleans, an acute respiratory illness required three visits to urgent care centers.

"It was really dragging me down," she recalled.

At one point she cried for home, but then managed to brighten her mood.

Promoted
Listen to the latest songs, only on JioSaavn.com
"I kept telling myself, 'This is home,'" Mansfield said. "Where I am is home."