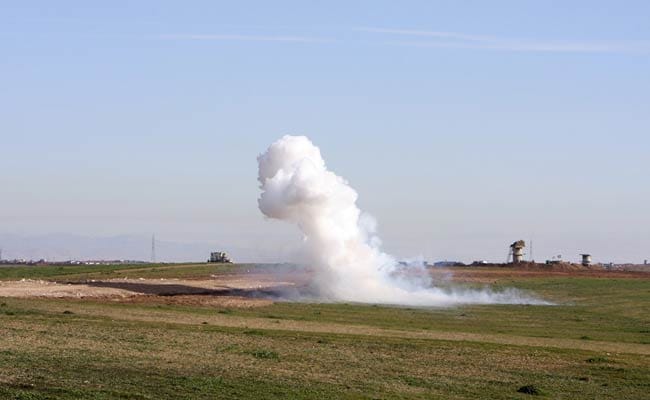 Smoke rises during clashes between Kurdish Peshmerga fighters and Islamic State (IS) militants on the outskirts of Mosul January 21, 2015.(Reuters)

Baghdad: In a government building in Mosul, a handful of Iraqi contractors gathered to compete for a tender last month.

It was the kind of routine session that happens in cities everywhere -- except here the contract was for fortifications ordered by the new rulers in town, Islamic State.

One member of the radical Islamist group grabbed a map and explained to those present what was required.

"Under Islamic State's tender document, a trench two meters in depth and two meters in width needs to be dug around Mosul," said a source in the city close to the tendering process.

The winning contractor will be paid the equivalent of $4,000 for each kilometre of trench, the source said.

The tender demonstrates Islamic State's determination to defend the city that it conquered in June, as the extremists grabbed a large area of territory from Baghdad. Rich in Muslim history, Mosul stands at the centre of the group's aim to carve out a modern caliphate from large parts of Syria and Iraq. Interviews with 11 Mosul residents, several of whom fled this month, reveal how Islamic State has created a police state strong enough to weather severe popular discontent and military setbacks, including the deaths of senior leaders. Along with the planned trench, the militants have sealed Mosul's western entrance with giant cement walls. They also blew up a bridge that Kurdish fighters could use to attack Mosul.

"They will fight to the last drop of blood defending Mosul, and for them this battle could define their existence. Losing Mosul means a final defeat for Islamic State in Iraq," said a retired army general living in Mosul.

Last week, Islamic State in Mosul posted on the Internet its version of justice: the stoning of a woman accused of adultery; two men crucified, accused of armed robbery; and two men thrown from a building for allegedly being homosexual.

Reuters interviewed Raheel, a 71-year-old Christian woman, who was brought before the court this fall and forced to convert to Islam.

Taken from a senior citizens home in Mosul, Raheel and nine others appeared before a bearded judge. Armed guards stood in the room.

"The judge began his speech, in a soft and elegant manner, and he was citing verses of the Koran and sayings of the Prophet Mohammad," Raheel told Reuters.

"He said that Islam is the true religion and that we must embrace it or we would die as infidels," she said after her freedom was obtained this month in an arrangement between Islamic State and Chaldean church representatives.

Islamic State runs at least four security organizations in Mosul, including traffic police and a tax force that collects revenues from businesses and individuals.

The most feared groups are an elite security committee that makes special arrests and gathers intelligence; and the Islamic moral police, or Hisba, that enforces the jihadists' brand of religious law.

Hisba and the intelligence units have also rounded up dozens of former officers, holding them to forestall any revolt and seeking to tap their military knowledge.

"We investigate them to figure out why they are not joining Islamic State," an Islamic State leader told Reuters by phone.

The religious code enforced by Hisba includes bans on smoking and on t-shirts with English writing.

Businesses must close at prayer times; women and girls must veil their faces; and schools are segregated.

A Mosul father stopped sending his 13-year-old daughter to school because she was forced to cover her face.

"She was saying to me 'Dad, I feel I can't breathe," the father told Reuters. "It is better she is free inside our house than a prisoner in school here."

WORKING FOR A LIVING

Baghdad earmarks at least $130 million monthly to pay Mosul government employees, whether they have stayed in the city or left, said Anwar Matti Hadaya, the exiled head of the Nineveh provincial council's finance committee.

The money is picked up in Kurdish-held Kirkuk by a department representative and taken to Mosul.

Baghdad says the salaries will remind people the national government has not forgotten them. It is unclear how much money reaches employees still in Mosul, but the cash has helped keep the city afloat.

Food is readily available. Meat, vegetables, bread and fruit cost the same as before, and some prices are lower than Baghdad.

Only fuel prices are high and electricity, supplied by generators, has been cut to six hours a day. Tankers provide drinking water.

Islamic State extracts payments from residents on a daily basis. Butchers must pay a tax of around $4 a day to enter slaughterhouses to buy cattle and sheep.

Shop tenants in buildings confiscated by Islamic State must now pay rent to the militants.

The group's wealth extends beyond oil smuggling and extortion.

Most of the cash has come from Mosul.

Citing intelligence reports, he predicted IS would create its own currency in the coming months, an idea the jihadists have advertised since June.

A lawyer, who fled this month, decided to leave with his two infant daughters rather than risk a looming military confrontation.

Promoted
Listen to the latest songs, only on JioSaavn.com
He said goodbye to seven brothers and his parents. The night before he escaped, he told his father he was leaving, knowing he might never see him again.