Mark Rober said he'd removed more than a minute of footage from his widely-seen video after, "I was presented with information that caused me to doubt the veracity of 2 of the 5 reactions in the video." 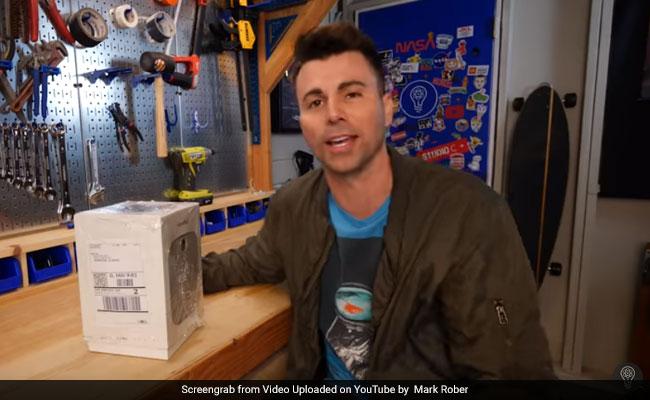 In a Christmas-joy-killing admission, the NASA engineer who constructed a glitter shooting, fart-smell-spraying device to get back at porch pirates told the world his video of package thieves getting their smelly, sparkly just deserts was at least partially staged.

Mark Rober, in a statement on Twitter Thursday, said he'd removed more than a minute of footage from his widely-seen video after, "I was presented with information that caused me to doubt the veracity of 2 of the 5 reactions in the video."

Rober said he had "put out a feeler" for someone willing to put the package on their porch, offering to pay them to set the bait and retrieve the ultimately-discarded package. But the "thieves" that stole the package from that person were "actually acquaintances of the person helping me."

Rober, who could not immediately be reached for comment on Saturday morning, claimed that the recorded reactions when packages were taken from his own house were legitimate, but that he could understand if people have doubts about the entire video.

"My credibility is sort of shot," he said in the tweet.

The video in question, Rober said, had been inspired by a pair of package thieves who'd made off with a delivery from his California porch one day in broad daylight, about seven months ago.

Indignant, Rober - a former NASA engineer who runs a popular YouTube channel documenting his many quirky science experiments - started thinking about how he could apprehend the porch pirates. Though he had caught the thieves on his security cameras, Rober said police had told him it was not worth their time to look into.

"So you also feel powerless. And I just felt like something needs to be done to take a stand against dishonest punks like this," Rober said in a YouTube video posted Monday. "And then I was like, hold up."

Rober explained he had spent nine years working for NASA, including designing hardware for the Mars Curiosity rover that is, well, currently roving Mars.

"If anyone was going to make a revenge bait package and over-engineer the crap out of it, it was going to be me," Rober concluded.

Rober decided he would create a booby trap inspired by his "childhood hero and inspiration" Kevin McAllister, the young and resourceful protagonist (played by Macaulay Culkin) in the Home Alone films of the 1990s.

With the help of friends, Rober mocked up a design for his ideal trap: It would be disguised as a package - specifically, a cellophane-wrapped Apple HomePod box he knew would be "enticing" for any porch pirate. It would be GPS-enabled, so he could track its journey once it left his home perimeter. It would record video with embedded cellphones, no matter how the thief picked up the parcel.

And, once triggered, it would be glittery. So glittery.

"Ultimately, when they opened the package, I wanted to celebrate their choice of profession with a cloud of glitter," Rober said.

One pound of glitter, that is. To add insult to injury, Rober also built in a can of "fart spray," programmed to automatically spray after the glitter explosion was triggered.

"No joke, you can clear a room with one spray of this stuff," Rober said.

For the specifics of how Rober engineered his smelly "glitter bomb," we turn to the YouTube video he created documenting the project:

The whole package took about six months to engineer and then "test" in the field.

There are a few delightful Easter eggs. If anyone had looked carefully, he or she would have noticed the mocked-up UPS delivery label addressed to "Harry and Marv," a nod to the up-to-no-good pair in "Home Alone."

As it turns out, none of the thieves paid such close attention before snatching the box.

On Monday, Rober uploaded his video documenting the project, "Glitter Bomb vs. Package Thief," to his YouTube page. As of Saturday morning, the video had more than 45 million views.

"It's like lighthearted engineering fun," Rober told The Washington Post in a phone interview Tuesday. "[With all my videos], I try to get people stoked about science and engineering. But this clearly struck some kind of nerve."

But in the past, he has disputed online criticism that he hired actors, insisting that all of the recorded footage was of actual package thieves.

"I challenge anyone who thinks packages don't get stolen to put a cellophane-wrapped HomePod box on their porch and leave it there day after day and see just how honest people are," Rober told The Post.

The porch pirate epidemic is real. A study by InsuranceQuotes estimated about 26 million Americans have had a holiday package stolen. With the rise in pilfered packages has come an increase in "doorstep vigilantes," as The Post's Petula Dvorak reported:

There's even a guy in Tacoma, Wash., who is marketing a device that sets off a 12-gauge blank the moment a pirate lifts the bait package.

One District of Columbia. woman fed up with having nearly $1,000 worth of packages stolen from her Capitol Hill porch left a pretty awesome present for her pirates - a box heavy with her two dogs' poop.

"It didn't stop them, though," reports Andrea Hutzler.