In Australia, Indian student attacked so badly, he can't speak 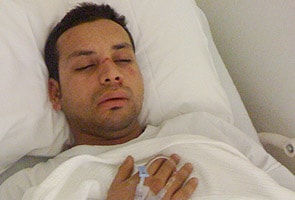 Melbourne: A young Indian student has been beaten so badly in Melbourne that he has critical face and mouth injuries. Doctors who are operating on him on Tuesday afternoon say he may not be able to speak or even open his mouth for the next few weeks.

Bharat Thapar has just finished his studies at a Melbourne college.  He moved to Australia three years ago from Panipat in Haryana.

Promoted
Listen to the latest songs, only on JioSaavn.com
On Monday night, he saw six people beating another Indian on the streets of Melbourne. When he tried to intervene, the attackers turned on him.  The policemen who arrived at the scene summoned an ambulance, but let the six assaulters leave the location.

The Indian who Bharat tried to save will be a witness in the case.  He and another eyewitness claim that the police is trying to misrepresent the facts to state that it was Bharat who started the fight.