In a nuclear ghost town, and longing for home 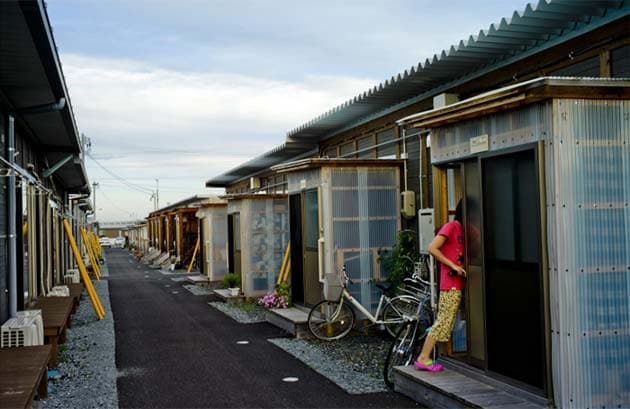 Housing at the Ushigoe camp for people displaced by the Fukushima nuclear disaster in Minamisoma, Japan.

Namie: Every month, Hiroko Watabe, 74, returns for a few hours to her abandoned house near the damaged Fukushima nuclear plant to engage in her own small act of defiance against fate. She dons a surgical mask, hangs two radiation-measuring devices around her neck and crouches down to pull weeds.

She is desperate to keep her small yard clean to prove that she has not given up on her home, which she and her family evacuated two years ago after a 9.0 earthquake and a tsunami devastated the plant 5 miles away. Not all her neighbours are willing to take the risk; chest-high weeds now block the doorways of their once-tidy homes.

"In my heart, I know we can never live here again," said Watabe, who drove here with her husband from Koriyama, the city an hour away where they have lived since the disaster. "But doing this gives us a purpose. We are saying that this is still our home."

While the continuing environmental disaster at the Fukushima Daiichi plant has grabbed world headlines - with hundreds of tons of contaminated water flowing into the Pacific Ocean daily - a human crisis has been quietly unfolding. Two and a half years after the plant belched plumes of radioactive materials over northeastern Japan, the almost 83,000 nuclear refugees evacuated from the worst-hit areas are still unable to go home. Some have moved on, reluctantly, but tens of thousands remain in a legal and emotional limbo while the government holds out hope that they can one day return.

As they wait, many are growing bitter. Most have supported the official goal of decontaminating the towns so that people can return to homes that some families inhabited for generations. Now they suspect the government knows that the unprecedented cleanup will take years, if not decades longer than promised, as a growing chorus of independent experts have warned, but will not admit it for fear of dooming plans to restart Japan's other nuclear plants.

That has left the people of Namie and many of the 10 other evacuated towns with few good choices. They can continue to live in cramped temporary housing and collect relatively meager monthly compensation from the government. Or they can try to build a new life elsewhere, a near impossibility for many unless the government admits defeat and fully compensates them for their lost homes and livelihoods.

"The national government orders us to go back, but then orders us to just wait and wait," said Tamotsu Baba, the mayor of this town of 20,000 people that was evacuated when explosions began to rock the plant. "The bureaucrats want to avoid taking responsibility for everything that has happened, and we commoners pay the price."

For Namie's residents, government obfuscation is nothing new. On the day they fled, bureaucrats in Tokyo knew the direction they were taking could be dangerous, based on computer modelling, but did not say so for fear of causing panic. The townspeople headed north, straight into an invisible, radioactive plume.

Until its people left, Namie was a sleepy farming and fishing community, stretching between mountains and the Pacific. These days, it is divided into color-coded sections that denote how contaminated various areas are, and how long former residents can stay during limited daytime-only visits. They are issued dosimeters on their way in, and are screened on their way out. Next to one checkpoint, a sign warns of feral cows that have roamed free since fleeing farmers released them.

Inside the checkpoints, Namie is a ghost town of empty streets cluttered with garbage and weeds, unheard-of in famously neat Japan. Some traditional wooden farmhouses survived the earthquake, although they have not survived the neglect. They collapsed after rain seeped in, rotting their ancient wooden beams. Their tiled roofs spill into the roads.

Through gritty shop windows, merchandise that fell off shelves in the quake can still be seen scattered on the floor. In the town hall, calendars remain open to March 2011, when the disaster struck.

Officials have reoccupied a corner of the building for their Office for Preparation to Return to the Town, although their only steps so far have been to install portable toilets and post guards to prevent looting. The national government hopes to eventually deploy an army of workers here to scrape up tons of contaminated soil. But officials have run into a roadblock: They have found only two sites in the town where they can store toxic dirt; 49 would be needed.

Just last month, the government admitted that such travails had left the cleanup hopelessly behind schedule in eight of the 11 towns, which they had originally promised would be cleaned by next March. Even in the places where cleanup has begun, other troubles have surfaced. Scouring the soil had limited success in bringing down radiation levels, partly because rain carries more contaminants down from nearby mountains.

The Environmental Ministry now says the completion of the cleanup in the eight towns, including Namie, has been postponed and no new date has been set.

In Namie, a town hall survey showed that 30 per cent of residents had given up on reclaiming their lives in their town, 30 per cent had not, and 40 per cent remained unsure.

Watabe's visits have been emotionally painful, and scary. She says her husband's car dealership was robbed. Her yard was invaded by a wild boar, which she managed to chase off. She considers weeding her driveway so risky that she waved away a visitor who offered to help, pointing to her dosimeter showing readings two and a half times the level that would normally force an evacuation.

She reminisced about her once close-knit community, where neighbors stopped by for leisurely chats over tea. She raised her four children here, and her 10 grandchildren were regular visitors; their stuffed animals and baby toys lie amid the debris on the dealership floor.

Her youngest son, whose own family had shared the house and who was supposed to take over the family business, has vowed never to return. He moved, instead, to a Tokyo suburb, worried that even the taint of an association with Namie could cause his two young daughters to face the same sort of discrimination as the survivors of the Hiroshima and Nagasaki bombings.

"The young people have already given up on Namie," Watabe said. "It is only the old people who want to come back."

"And even we will have to give up soon," her husband, Masazumi, added.

While their chances of making it back seem low, their former neighbours in the town's mountainous western half are even less likely to return anytime soon. The Watabes' house sits in the orange zone, indicating mid-level radiation. Most of the area is a red zone, the worst hit.

The road that winds up a narrow gorge of roaring rapids from the main town seemed idyllic on a recent visit, except for the bleating of a radiation-measuring device. Cleanup here was always expected to be harder, given the difficulties of trying to scrape whole mountainsides clean.

Near the entryway of her three-century-old farmhouse, 84-year-old Jun Owada swept her tatami floor clean of the droppings from the mice that moved in when she moved out. She had returned this day to perform a traditional mourning rite, washing the grave of her husband, who died before the earthquake.

Unlike the Watabes, she has decided to move on and is living with a son in suburban Tokyo even as she comes back to honour a past she is putting behind her. Every time she visits, she said, she receives a dose equivalent to one or two chest X-rays even if she remains indoors. As she pushed her broom, she pointed out things she could not fix.

The terraced rice patties are overgrown, and although her home's thick wooden beams have held out longer than her neighbours', they, too, are starting to rot.

"One look around here," she said, "and you know right away that there is no way to return."

Promoted
Listen to the latest songs, only on JioSaavn.com
(Makiko Inoue contributed reporting.)

5 Leading Newspapers Urge US To Drop Hunt For Julian Assange