In a city that is bankrupt, riches for professional sports 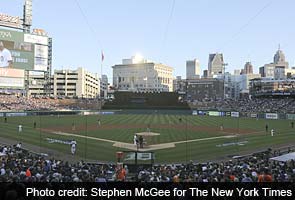 Detroit: In this bankrupt city where even keeping the streetlights on has proved a struggle, one industry has continued humming along at a multibillion-dollar clip: professional sports.

The Detroit Tigers, who are playing in the American League Championship Series, have one of the highest payrolls in baseball at $148 million. Their star first baseman makes $23 million a year. And in a city that is contracting, the Tigers are expanding - their payroll is up 38 percent from 2011.

The Detroit Pistons spent about $80 million to sign two second-tier guards this summer. The Detroit Lions' quarterback signed a three-year extension in July worth $53 million. And the pizza entrepreneur who owns the Tigers and the Detroit Red Wings plans to build an arena as part of a downtown development project partly supported by $285 million in public funds.

Detroit's glittering sports teams operate in a different economy than does the rest of the city. Because of billionaire owners, lucrative television deals, dedicated fans and public subsidies, the city's teams have few of the problems that have dragged their hometown into the largest municipal bankruptcy filing in the nation's history.

But that does not mean the yawning gap between the team's star-studded locker rooms and the city's boarded-up neighborhoods has no sting. A Lions defensive lineman has shrugged off more than $342,000 in fines and missed-game penalties - enough to pay the salaries of 10 rookie police officers.

"There's a lot of disposable cash around, but it's not intended for the right things or right people," said Amzie Griffin, a vendor at Comerica Park, the downtown baseball stadium. "We need jobs for the city people, for the black folk."

Griffin, still working at 79, is one of many people here worried about household bills and dismayed at publicly financed stadiums and inflated player contracts.

With gray hair peeking beneath his Tigers cap and bifocals balanced on his nose, Griffin occupies a rare perch in Detroit's sports world. For more than a half-century, he has sold everything from popcorn to pennants. He worked at old Tiger Stadium and is now at Comerica, a sparkling $300 million stadium that opened in 2000. The public shouldered more than a third of the ballpark's costs.

Last week, as the Tigers played the Oakland A's in the American League playoffs, Griffin arrived at work 3 1/2 hours before the first pitch to put on his uniform, as he has done for decades. He sold Tigers jerseys and tiny bats to fans, a predominantly white crowd of 44,000, many of whom drove in from the suburbs and drove out again after the ninth inning.

Griffin went to work last week ringing up merchandise, chatting with customers and sneaking peeks at the ballgame, but part of Detroit's municipal workforce stayed home thanks to an enforced furlough. The mayor's office, the City Council, the Board of Ethics and the Finance Department's purchasing division were all shuttered for the first of two furlough days scheduled in October. Much of the rest of the city was just as quiet. Buses ran late or not at all. Whole acres of downtown streets were vacant. Young men stood idle on sleepy street corners.

"I remember when we all took care of each other, instead of just our own," Griffin said, taking his place behind his souvenir stand.

He calls himself a real Detroiter who knows his way around hardship, worked two jobs for much of his life and still lives in the heart of the city. His stadium job pays him on commission. Griffin is hardly the only one to notice the dissonance of professional sports in Detroit these days. The view looks just as strange from the batter's box as it does from the souvenir stand, according to members of the Tigers' organization.

At a recent news conference, a reporter asked Detroit catcher Alex Avila if he felt guilty earning nearly $3 million a year. It was a question few other baseball players would have to field, but one that Avila sounded as if he was expecting.

"We definitely are aware of the situation of where we play," he said. "One thing that motivates us is that we want to be able to bring a championship to Detroit, a place that has longed for one."

He added, "We feel we are a big part of the reason that people are coming back downtown."

There is no doubt that the Tigers have remained popular throughout the city's financial travails. The team drew nearly 3.1 million fans this season, ranking sixth in attendance among the 30 major league teams. The Tigers' television ratings are among the best in baseball.

But Griffin, who hawked popcorn for 20 cents a box before any of today's Tigers were born, said he has seen the bonds between the players and the fans fraying. He remembered that when he was a young man working two jobs, one on the production line at Ford Motor Co. and the other at the ballpark, first baseman Norm Cash made time for young and old fans alike. Willie Horton, the former outfielder, invited Griffin and other stadium employees to his home for fish fries.

"It's a whole different world now," Griffin said. "This generation of ballplayer, you can't even approach them."

At a time when there is no such thing as a spare dollar in Detroit, some people here are especially troubled by proposals to use public money for professional sports.

Michigan's governor, Rick Snyder, a Republican, has supported a plan to put public money toward a $650 million downtown development project, with a stadium for the Red Wings as the centerpiece. The project, plans for which include apartments, offices, restaurants and shops, is led by Olympia Development, which is owned by Michael Ilitch, the owner of the Tigers and the Red Wings, and the founder of Little Caesars Pizza.

As for Griffin, he remembers how Detroit looked when he moved here from Alabama in 1953. The black-owned Gotham Hotel was the elegant epicenter of a vibrant city and his east side neighborhood was populated by people who cared about their property and one another.

"It was clean and beautiful," Griffin said. "Now, it's not. Put that in the paper."
© 2013, The New York Times News Service
Comments
Detroitbankrupt city