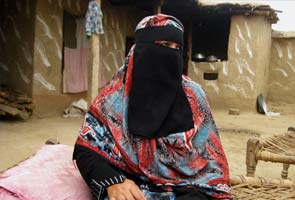 Khar, Pakistan: A Pakistani housewife, who cannot read or write despite being married to a headteacher, has made history by becoming the first woman approved to run for election in the Taliban-infested tribal belt.

Badam Zari, 53, may have little chance of winning, but her enthusiasm has been seized upon as a step towards emancipation in one of the most conservative parts of Pakistan, where women live in purdah and few even vote.

"I am contesting the election with passion, with a clean heart and a clear conscience. My passion is to educate the future generation, girls and women, and to serve them," she told AFP in a telephone interview from Bajaur district.

"I know I am the first woman to contest and I am hopeful that I will win."

Her father initially sent her to the village school, but when other relatives said it was inappropriate for her - a young girl of only six or seven - to walk through the market to class, she was kept at home.

Bajaur is one of seven districts that make up Pakistan's Federally Administered Tribal Areas (FATA). The semi-autonomous region of mountains, valleys and caves is one of the most deprived and ill-educated in the country.

It has been a stronghold for Afghan Taliban, Al Qaeda and other Pakistani militant groups, and for years a battleground between the army and insurgents.

Zari says she has never been threatened but acknowledges she cannot campaign in public, confining herself to going door-to-door among women's quarters.

"I have no fear, I have never been threatened by anyone," she said.

Reforms introduced in 2011 in a bid to lessen the grip of militancy, mean political parties can contest elections for the first time in FATA, but Zari is standing as an independent.

There are 1.7 million registered voters in the tribal belt, just 600,000 of them women, the lowest rate in the country. None of the 60 seats reserved for women in the lower house of parliament is in FATA.

Zari and her husband, 55-year-old Mohammad Sultan, have put together a short manifesto, pledging to solve the problems of people in Bajaur, even diverting the benefits she would receive in parliament to her constituents.

"Bajaur is an area which lacks all basic facilities. It's a deprived area. We have no women's education, no health facility, no electricity and no roads," she told AFP by telephone.

"Sometimes women living in the mountains die because of lack of health facilities. We don't even have clean drinking water and I want to struggle for it."

She registered to run on Sunday but was only told by election commission officials on Wednesday that her application had been accepted. Under Pakistani law, being illiterate and uneducated is no bar to running for parliament.

Noor Ul Wahab, an election officer in Bajaur, confirmed to AFP on Thursday that Zari's papers had been approved, clearing the way for her campaign.

Zari's husband, who has a masters degree in international relations, confirmed his wife can write only her name and cannot read a newspaper, yet declined to say why he had not educated her. Two of his brothers are doctors.

The couple have been married for 26 years but have no children.

Although her chances are remote, Ijaz Khan, who teaches political science at the University of Peshawar, told AFP that it was an interesting move.

"She will not be able to get many votes, obviously," he told AFP.

"For a woman to come up and say 'I will represent you better than all men and women'. Just saying that is a big change."

Zari is the first woman to stand in FATA, but two women from tribal communities in the southwestern province of Baluchistan were elected to parliament, in 2002 and in 2008.

Promoted
Listen to the latest songs, only on JioSaavn.com
The first woman, Zubaida Jalal, served as education minister under military ruler Pervez Musharraf.