'I Don't Want You To Get Shooted!': Footage Of 4-Year-Old And Mom

The girl had witnessed a Minnesota police officer fire seven shots at Castile, who died. 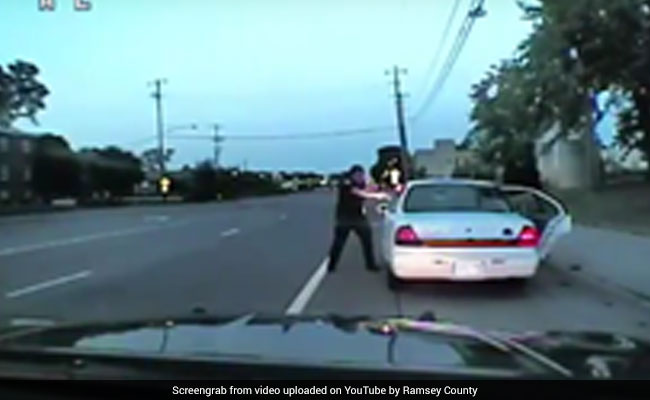 Diamond Reynolds's live stream of the police shooting death of her boyfriend.

In the back seat of a patrol car, moments after witnessing a Minnesota police officer fire seven shots at Philando Castile, Diamond Reynolds' 4-year-old daughter begged her mother to stop screaming, in fear that officers would shoot her, too.

"Mom, please stop saying cuss words and screaming 'cause I don't want you to get shooted," the girl pleaded to Reynolds, Castile's girlfriend.

Reynolds, whom police had placed in the back seat next to her daughter, gave the girl a kiss.

"I could keep you safe," her daughter said.

The dialogue - captured in video footage from a police officer's squad car - was part of a trove of files released by the Minnesota Bureau of Criminal Apprehension on Wednesday, five days after police officer Jeronimo Yanez, 29, was acquitted of manslaughter in Castile's July 2016 death during a traffic stop.

On Tuesday, state officials also released to the public a police dashboard camera recording of the shooting itself, along with a collection of other documents and evidence from the state's investigation into the shooting, The Washington Post reported.

The scene between Reynolds and her daughter provides an even deeper look into the initial aftermath of the shooting in Falcon Heights, Minn., which was live-streamed worldwide on Facebook by Reynolds, who was sitting next to Castile in the car when the officer fired. Her 4-year-old daughter was sitting in the back seat.

The officer testified that he feared for his life after Castile told him that he had a gun. Reynolds told authorities Castile was shot while reaching for his wallet, not his gun, which he had a permit to carry. Castile, 32, worked a nutrition services supervisor for St. Paul Public Schools.

Minnesota Gov. Mark Dayton, who met with black leaders on Wednesday, spoke of the video footage during a news conference, the Star Tribune reported.

"Seeing the little girl and her mother in the back of the squad car, hearing a child's narrative of what occurred, it was really awful," Dayton said.

In the video of the back seat, Reynolds' daughter is shown trying to console her mother, whom police had in handcuffs and did not yet know whether Castile was alive or dead.

"I can't believe they just did this," Reynolds responded. As the mother screamed and cried, her daughter held her close.

Minutes later, Reynolds moved around in her seat as her daughter asked her to stay quiet, so she wouldn't be shot.

"They're not gonna shoot me, okay?" Reynolds said. "I'm already in handcuffs."

"Don't take them off," the girl begged. "I wish this town was safer."

"I don't want it to be like this anymore," the girl said.

"Tell that to the police, okay?" Reynolds said. "When they come and get me, tell them you wish that they didn't have to kill people."

In another angle of the video footage, officers instructed the mother and daughter to put on their seat belts in the back seat. A voice told Reynolds she was being taken to give a statement to the state Bureau of Criminal Apprehension.

"You guys don't understand," Reynolds said, crying. "I feel like I'm being a prisoner and you guys did this to me."

"Why?" Reynolds screamed out, looking distraught.

The girl tells her, "I was scared because I didn't want bullets to come in the back seat." (Photographs later showed a bullet that passed through Castile's seat hit the back seat, barely missing the girl.)

Promoted
Listen to the latest songs, only on JioSaavn.com
"His birthday is next week," she said. "I can't believe this."