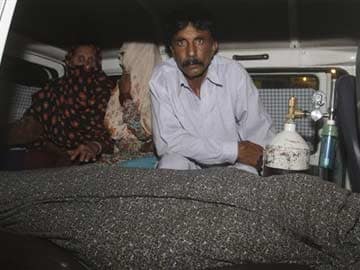 Mohammad Iqbal, right, husband of Farzana Parveen, 25, sits in an ambulance next to the body of his pregnant wife who was stoned to death by her own family in Lahore, Pakistan on May 27, 2014

Lahore: The husband of a pregnant Pakistani woman bludgeoned to death outside a courthouse murdered his first wife, he told AFP on Thursday, in a twist to a story that has shocked rights activists.

Farzana Parveen was murdered on Tuesday outside the High Court in the eastern city of Lahore by more than two dozen attackers, including her brother and father, for marrying against her family's wishes. (Pakistan PM Demands Prompt Report on 'Honour Killing' of Pregnant Woman)

The brazen, brutal nature of the killing, in broad daylight in the centre of Pakistan's second largest city, has triggered outrage around the world. (Pakistan Police Stood By As Pregnant Woman Beaten To Death, Husband Says)

"I was in love with Farzana and killed my first wife because of this love," adding that he had strangled her. (Husband of Pregnant Pakistani Woman Beaten to Death Demands Justice)

Iqbal said he was spared a prison term because his son - who alerted police to the murder - later forgave him under Pakistan's controversial blood-money laws.

After admitting to the murder he switched off his phone and did not respond to further calls.

Rights groups have expressed fears the same blood-money laws that spared Iqbal could be used to pardon Parveen's killers.

Zulfiqar Hameed, a senior police officer investigating the killing of Parveen, said police would be filing a report to the government later on tonight detailing Iqbal's past.

"Iqbal was a notorious character and he had murdered his first wife six years ago. A police case was lodged against him and he was on the run for many weeks," Hameed said.

"He was arrested and later released after a compromise with his family."

According to Iqbal, a farmer from the Jaranwala district of Punjab, Parveen's family had initially agreed to their marriage but they had later fallen out because they wanted a greater amount in dowry.