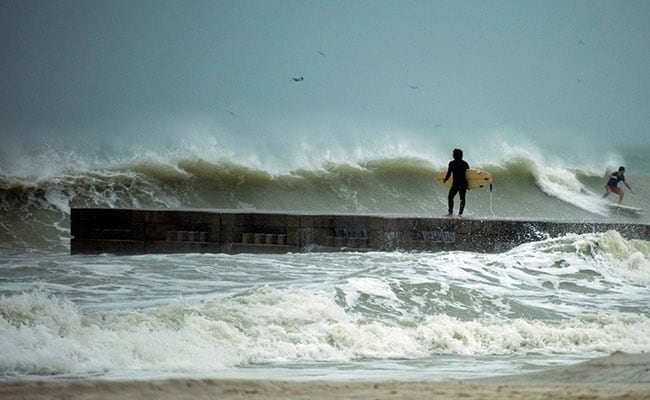 Iota is projected to hit the Colombian island of Providencia by late Sunday.

Less than two weeks after powerful storm Eta killed more than 200 people across Central America, authorities warned that Hurricane Iota was set to wallop coastal areas of Nicaragua and Honduras on Monday.

As of 0300 GMT Sunday, Iota -- the latest in an unusually busy storm season -- was about 440 miles (705 kilometers) east-southeast of the Cabo Gracias a Dios on the Nicaragua-Honduras border, moving slowly westwards with maximum sustained winds of 75 miles per hour (120 kph).

"Reconnaissance aircraft finds Iota has strengthened into the thirteenth hurricane of the 2020 Atlantic hurricane season," it tweeted.

Iota is projected to hit the Colombian island of Providencia by late Sunday and is expected to rapidly strengthen into a major hurricane as it approaches Central America.

"It is likely that the heavy rainfall from Iota, through Thursday, will lead to life-threatening flash flooding and river flooding in parts of northern Colombia and Central America," the NHC warned.

"The flooding and mudslides in Honduras and Nicaragua may be exacerbated by the recent effects of Hurricane Eta in those areas, resulting in significant impacts."

Honduras, Guatemala and Nicaragua announced evacuations Friday, even as the region was still reeling from the devastation inflicted by Eta.

The NHC warned that Iota would deposit as much as 16 inches (40 centimeters) of rain on Honduras, northern Nicaragua, eastern Guatemala and southern Belize, with isolated totals of up to 30 inches.

That could lead to "significant, life-threatening flash flooding and river flooding, along with mudslides," the NHC said.

Authorities in Honduras on Friday ordered police and the army to evacuate the area of San Pedro Sula -- the country's second city and industrial capital, located 110 miles north of Tegucigalpa.

Eta hit that area hard: About 40,000 people are still in shelters across the country.

The government also ordered water released from Honduras's main hydroelectric dam, due to danger of it overflowing from Iota's rains.

Initial estimates show "some 80,000 families are going to be at risk," he said, with evacuations underway in communities along the border with Honduras.

Authorities on Friday sent boats to evacuate the community in Cabo Gracias a Dios, where the Coco River flows into the Caribbean along the "Mosquito Coast."

Eta hit the Caribbean coast of Nicaragua as a Category 4 storm, one of the strongest November storms ever recorded.

This year's hurricane season has seen a record 30 named tropical storms across the Caribbean, Central America and the southeastern US.