"Failure to address their needs will cause a hunger pandemic which will dwarf the impact of Covid," World Food Programme executive director David Beasley said. 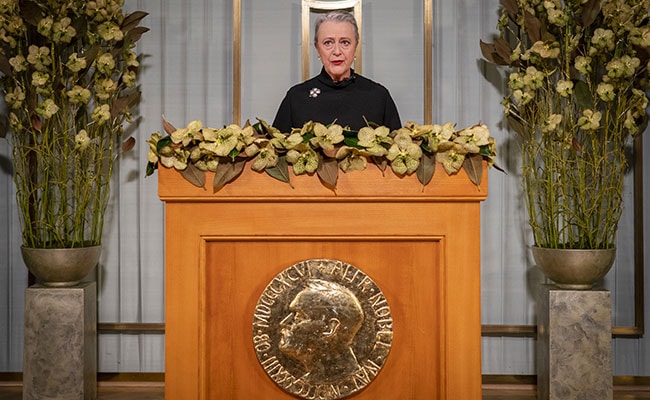 Accepting the Nobel Peace Prize in a ceremony held online because of the coronavirus, the World Food Programme (WFP) warned Thursday of a "hunger pandemic" it said could be worse than Covid-19.

"Because of so many wars, climate change, the widespread use of hunger as a political and military weapon, and a global health pandemic that makes all of that exponentially worse, 270 million people are marching toward starvation," WFP executive director David Beasley said.

"Failure to address their needs will cause a hunger pandemic which will dwarf the impact of Covid," he said, removing his facemask to make his remarks broadcast from the WFP's headquarters in Rome.

The largest humanitarian organisation fighting famine, the UN agency founded in 1961 feeds tens of millions of people each year -- 97 million in 2019 -- across all continents.

The WFP was honoured with the Nobel for its efforts "to prevent the use of hunger as a weapon of war and conflict", committee chairwoman Berit Reiss-Andersen said when she announced the winner on October 9.

With nationalist tendencies taking hold across the globe, the WFP "represents exactly the kind of international cooperation and commitment that the world is in dire need of today," Reiss-Andersen said Thursday, speaking from a deserted Nobel Institute in Oslo.

The Covid-19 pandemic has forced Nobel officials to scale back the traditional festivities to a bare minimum, both in Oslo where the Peace Prize is announced and presented, and in Stockholm, which hosts the prizes for medicine, physics, chemistry, literature and economics.

Because of the exceptional circumstances, the Nobel gold medal and diploma were sent to Rome in a diplomatic pouch.

"This Nobel Peace Prize is more than a thank you. It is a call to action," Beasley said.

"Famine is at humanity's doorstep", he said, and "food is the pathway to peace."

In recent weeks, the agency has expressed alarm about the risk of famine in Burkina Faso, South Sudan, northeastern Nigeria and Yemen.

Already at record levels, malnutrition in Yemen is expected to get even worse due to the pandemic and lack of funds.

"We stand at what may be the most ironic moment in modern history," Beasley said.

"On the one hand, after a century of massive strides in eliminating extreme poverty, today those 270 million of our neighbours are on the brink of starvation."

Nobel festivities in Stockholm have also been cancelled, replaced by events mostly pre-recorded for an online broadcast later Thursday.

"The pandemic has subjected us all to difficult obstacles," Nobel Foundation director Lars Heikensten said Thursday.

"We have been reminded of the importance of cross-border cooperation in resolving humanitarian crises and that, with the help of science, we can find solutions to the challenges we face," he added.

The 2020 Nobel literature laureate, US poet Louise Gluck, was first to receive her medal and diploma in a private ceremony at her home in Massachusetts on Sunday, followed by separate events for the other winners in their cities of residence in recent days.

This year's laureates will be welcomed to Oslo and Stockholm at a later date, probably in 2021.

In order to receive the prize sum of 10 million Swedish kronor (975,000 euros, $1.18 million), Beasley must hold the traditional Nobel lecture within six months.

Saying he goes "to bed weeping over the children we could not save", Beasley concluded his remarks with a desperate appeal.

"Please don't ask us to choose who lives and who dies... Let's feed them all."