The protests happened day after a massive demonstration there triggered a shutdown at the busy international travel hub. 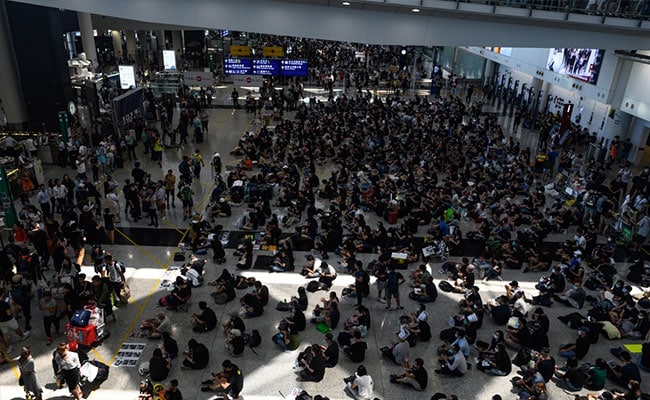 Protesters were wearing the signature black of the movement and chanted "stand for freedom."

Hundreds of pro-democracy protesters staged a new rally on Tuesday at Hong Kong's airport, a day after a massive demonstration there triggered a shutdown at the busy international travel hub.

Only a handful of protesters stayed through the night, and flights resumed at the airport early in the morning. But by afternoon, several hundred demonstrators had returned, responding to a call for a new rally.

Protesters were wearing the signature black of the movement that began in opposition to a bill allowing extradition to mainland China but has morphed into a broader call for democratic freedoms.

They chanted "Stand with Hong Kong, stand for freedom," as passengers scrambling to catch rescheduled and delayed flights wheeled their luggage through the airport.

Authorities cancelled all remaining flights into and out of the airport on Monday afternoon after thousands of protesters flooded the building.

Operations resumed early Tuesday morning, but a massive backlog of cancelled flights meant many take-offs were being delayed or cancelled.

(Except for the headline, this story has not been edited by NDTV staff and is published from a syndicated feed.)
Comments
Hong KongHong Kong protestsHong Kong Airport