Humans Causing Massive Changes In The Location Of Water All Over The Earth: NASA

The results emerge from the 2002-2016 GRACE mission, which is short for Gravity Recovery and Climate Experiment, supplemented with other additional data sources. 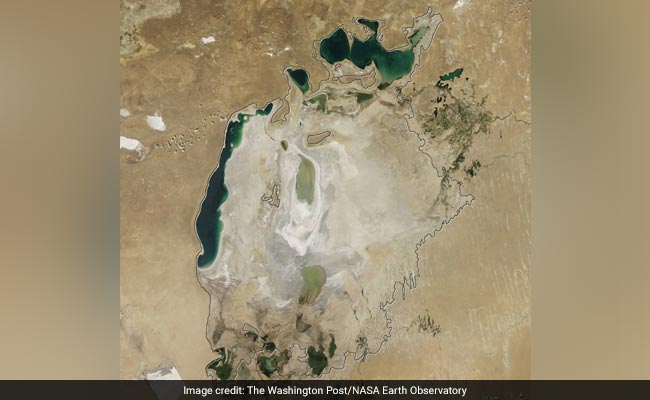 In the Aral Sea, the body of water has shrunken in size dramatically in recent years

A 14-year NASA mission has confirmed that a massive redistribution of freshwater is occurring across the Earth, with middle-latitude belts drying and the tropics and higher latitudes gaining water supplies.

The results, which are probably a combination of the effects of climate change, vast human withdrawals of groundwater and simple natural changes, could have profound consequences if they continue, pointing to a situation in which some highly populous regions could struggle to find enough water in the future.

"To me, the fact that we can see this very strong fingerprint of human activities on the global water redistribution, should be a cause for alarm," said Jay Famiglietti, a researcher at NASA's Jet Propulsion Laboratory and one of the authors of a new study published in Nature on Wednesday.

The results emerge from the 2002-2016 GRACE mission, which is short for Gravity Recovery and Climate Experiment, supplemented with other additional data sources. The GRACE mission, which recently ended but will soon be replaced by a "Follow-On" endeavor, consisted of two twin satellites in orbit that detected the tug of the Earth's gravity below them - and monitored mass changes based on slight differences in measurements by the two satellites.

Among all the very massive features on the Earth, water and ice are the ones that change most regularly. Thus, the GRACE data have been used to detect anything from the vast losses of ice in Greenland, Antarctica and Alaska, to changes in ocean currents, to the scale of the California drought.

The new research, led by NASA's Matthew Rodell, pulls together these and other findings to identify 34 global regions that either gained or lost more than 32 billion tons of water between 2002 and 2016. As the study notes, 32 billion tons is about the amount of water contained in Lake Mead. So all 34 areas saw very large changes.

The resulting map of the findings shows an overall pattern, in which ice sheets and glaciers lose by far the most mass at the poles, but at the same time, middle latitudes show multiple areas of growing dryness even as higher latitudes and the tropical belt tend to see increases in water.

The study emphasizes that the 34 separate changes that it detects do not all have the same cause - not even close.

There's very strong suspicion that the melting of glaciers and ice sheets is tied to climate change. On land, it's possible that some droughts and rainfall increases may be also, though the study is cautious about that, noting that natural variability can also be a major factor here.

Still, the idea of mid-latitude drying and higher- and lower-latitude wetting is a common feature of climate change models. "We only have 15 years of data from GRACE, but it sure as heck matches that pattern, it matches it now," said Famiglietti. "That's cause for concern."

Further data from a new launch of the GRACE "Follow-On" mission will contribute to a longer data record that may help better identify trends, Famiglietti said.

And then there are other human induced changes, relating not to climate change but rather to direct withdrawals of water from the landscape.

Thus, in northern India, the northern China plain, the Caspian and Aral Seas, among other regions, human withdrawals for agriculture have subtracted enormous amounts of water mass from the Earth. The changes in the Aral Sea region, previously documented by NASA, have been particularly intense.

There are also some major cases of humans increasing water storage in the landscape, particularly in China, where massive dam construction has created enormous reservoirs.

Mainly, though, what's striking about the map is the way that a combination of human-driven water withdrawals and droughts seem to be punishing the central latitudes of the northern hemisphere in particular, but also the southern hemisphere to a significant extent.

"I think we have forgotten, society has forgotten, how much water it takes to produce food," Famiglietti said. "We've taken its availability for granted. And you know, now we're at a point in many of these aquifers where we can't take it for granted any more. Population is too great, groundwater levels are too low . . . we're at tipping points."

Still, it's important to bear in mind that, while the GRACE data have given a new panoptic view of the changing distribution of water around the globe, the data remain coarse and the causes behind the trends in many cases remain a matter of interpretation, cautioned Peter Gleick, an expert on climate change and water who is president emeritus the Pacific Institute.

"Without a doubt the GRACE system proved that we can see very significant changes in water storage around the planet," said Gleick. "Figuring out what drives those changes, is a harder thing."

The next GRACE satellite mission will provide still better data, he agreed.

Promoted
Listen to the latest songs, only on JioSaavn.com
"We're in this transition between not really having a global overview, and someday having an incredibly high-resolution sophisticated remote sensing overview," Gleick said. "That's where we are."