Hugo Chavez lies in state with open casket for farewell 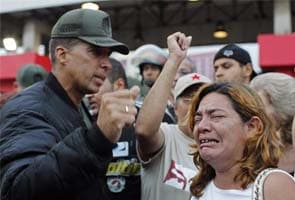 Caracas, Venezuela: The body of late Venezuelan President Hugo Chavez lay in state in a half-open casket Wednesday at a military academy in Caracas, after throngs of weeping supporters lined the streets to bid farewell.

Hundreds of thousands waved flags and chanted "Chavez lives" as his hearse crawled across the capital in a seven-hour trip from the hospital where he died to the academy he once called his second home. ('Goodbye my president': Supporters cry for Hugo Chavez)

The former paratrooper's hand-picked successor, Vice President Nicolas Maduro, walked alongside the car, wearing a somber expression and the colors of the national flag, in what was in effect his debut in an election campaign.

Maduro was accompanied the length of the route under a baking sun by Bolivia's President Evo Morales, cheered on by huge crowds.

Once at the academy, soldiers removed flowers and mementos thrown on to the wooden casket by the crowd and Chavez's grieving mother Elena covered her face with a white handkerchief during a Catholic ceremony.

The coffin was then ushered inside and placed half-opened in the hall, surrounded by his three daughters, son Huguito and a grand-daughter, who looked at their father, some choking back tears, as people chanted: "Chavez lives, the struggle goes on," as officials and three Latin American presidents applauded.

Chavez's death after a near two-year struggle with cancer was a blow to his supporters and to the alliance of left-wing Latin American powers, and it has plunged his resource-rich country into uncertainty.

Under Chavez, Venezuela's oil wealth has underwritten the Castro brothers' communist rule in Cuba and he repeatedly courted confrontation with Washington by cozying up to anti-Western governments in Russia, Syria and Iran.

Chavez's body, surrounded by soldiers en route to the academy where he found his political calling as a young man, will lie in state for Venezuelans to see until an official ceremony with foreign dignitaries on Friday.

People watched from their apartment windows while others climbed fences to get a better view of the hearse. Many held or wore iconic images of Chavez.

"We will carry him in our hearts forever. We're going forward until death with him," said Jose Viloria, 64, an agricultural trader, as the president's coffin made its way along a packed avenue under a hillside slum that was a bastion of support.

The 58-year-old leader died Tuesday, weakened by a respiratory infection after a fourth round of cancer surgery.

Maduro, who on Tuesday tearfully broke the news to the nation that his mentor had died, has taken over as interim president and will campaign for the presidency proper. (Even after death, Hugo Chavez gets choice of successor)

The death brought thousands of citizens to public squares across the country, weeping and celebrating the life of a man whose oil-funded socialist revolution delighted the poor and infuriated the wealthy.

But in a country divided by Chavez's populist style, not everyone agreed on his legacy, with opposition supporters in better-off neighborhoods still angry.

"Hate and division was the only thing that he spread," 28-year-old computer programmer Jose Mendoza told AFP in an eastern Caracas opposition bastion. "They want to make him a martyr. It made me laugh.

"He did a lot of social things, but he could have done much more. He also did a lot of harm because there are no institutions, there is no justice. He mistreated everyone who disagreed with his government."

Some of Chavez's closest Latin American allies had already arrived on Wednesday ahead of the state funeral, including Morales, Argentine President Cristina Kirchner and Uruguay's Jose Mujica.

Maduro said the nation's security forces had been deployed but Foreign Minister Elias Jaua said calm reigned in Venezuela, which was rocked by a short-lived coup against Chavez in 2002. (Venezuela's Hugo Chavez dies, armed forces deployed)

But US President Barack Obama -- once branded a "poor ignorant person" by Chavez -- was circumspect, pledging American support for the "Venezuelan people" while expressing the hope that relations might now improve. (US supports Venezuelan people after death, says Obama)

Shortly before Chavez's death was announced, Maduro expelled two US military attaches and accused Venezuela's enemies of somehow afflicting the leftist president with the cancer that eventually killed him.

Russia, China and Iran hailed Chavez as a man who had cultivated close ties with foes of the West as a way of thumbing his nose at Washington. (Hugo Chavez a 'great leader and great friend': China)

And beleaguered Syrian President Bashar al-Assad, who is trying to crush a revolt against his brutal rule, dubbed Chavez's death "a great loss for me personally and the Syrian people."

Chavez had checked into the Caracas hospital on February 18 for a course of chemotherapy after spending two months in Cuba for cancer treatment.

A new election could offer another shot at the presidency to Henrique Capriles, the opposition leader who lost to Chavez in October.

Luis Vicente Leon, director of the polling group Datanalisis, said the government will likely want to hold elections as early as possible "to take advantage electorally of the emotion generated by the president's death."

He missed his swearing-in for a new six-year term on January 10, but the Supreme Court approved an indefinite delay.