Tyson Steele, 30, was rescued by helicopter on Thursday. His cabin was incinerated in mid-December and his beloved dog died in the blaze. 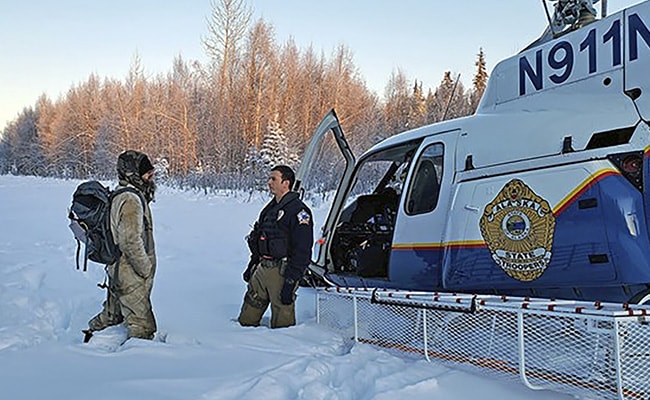 Haggard and traumatized, a young man has told how he survived for more than three weeks in the snowy wilderness of Alaska after his remote cabin burned down when he mistakenly put cardboard in his stove.

Tyson Steele, who was rescued by helicopter on Thursday, said his cabin -- located 20 miles (30 kilometers) from the nearest neighbour -- was incinerated in mid-December, and his beloved dog Phil died in the blaze.

Steele, 30, dug a snow cave and then built a makeshift shelter, staying warm with just a few sleeping bags and coats, and eating tins of food saved from the fire.

Helicopter footage released by Alaska State Troopers showed Steele waving for help, with SOS marked out in the deep snow, after a rescue effort was launched as he had not called his parents for three weeks.

"The mistake I made, I got hasty and I put a big piece of cardboard in the stove to start the fire," Steele said. "It sent a spark out through the chimney which landed on the roof."

He awoke in the middle of the night to the sound of melting plastic dripping and rushed outside in minus 15 degrees Fahrenheit (minus 26 degrees Celsius) temperatures to find his cabin ablaze.

At first, he thought his six-year-old chocolate Labrador had escaped safely.

"My dog starts howling, right? Inside. And I thought he was not inside... I was hysterical," he said.

"I have no words for what sorrow; it was just a scream... that's all I could express -- just scream. (It) felt like I tore my lung out."

Steele described how a box full of ammunition and a propane tank exploded in the roaring fire as he tried to save the cabin by throwing snow on it until dawn.

Eating a long-awaited McDonald's and still wearing some of the same clothes, Steele gave an interview to the State Troopers unit, which described him as appearing "vaguely reminiscent of actor Tom Hanks' character in the movie 'Cast Away'."

Steele told how his phone failed, his snow boots were lost in the flames, and that he made a survival plan hoping that his lack of communication with friends and family would trigger a search mission.

"I figured I had two cans a day for 30 days... The thing was, maybe half of those cans, they've heated up and popped open and the smoke's circulating inside the can. It tastes like my home, just burning."

Steele, who was in good physical condition after his ordeal, said it snowed heavily and that one attempt to walk out of the forested area left him quickly defeated.

He had been living alone at the cabin -- originally built by a Vietnam War veteran -- in Susitna Valley only since September, and he did not have a map.

Steele said he was going to stay with his parents in Salt Lake City to recover.

"They've got a dog," he said. "And that would be some therapy.