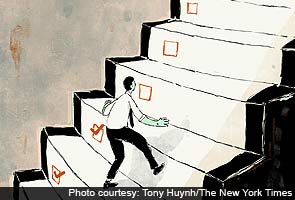 Making a to-do list should be easy: You just write down all the things you need to do, do them and check them off your list as you go along, right?

People fall into all kinds of traps with their to-do lists. They allow wishful thinking to take over and put too many tasks on their lists. They have lists all over the place, sometimes both paper and electronic. They put vague and unrealistic goals on their lists. Or they set up impossibly short time frames for completing their tasks.

Too easily, a to-do list can turn into "a daily failure list," said Laura Vanderkam, author of "168 Hours: You Have More Time Than You Think." "You put stuff on there that you have no intention of doing."

Planned and executed wisely, the humble to-do list can be a goad to productivity.

On days when I have lots of things to do, a list helps me set priorities and break down large tasks into smaller ones. I put my list on paper, and it's enormously satisfying to make a check mark with my pen against a finished task. On a particularly harried day, I tend to draw empty boxes next to my tasks, because making a mark inside a box feels particularly emphatic.

Certain types of people, regardless of age, prefer to keep their to-do lists on paper, said Julie Morgenstern, a productivity consultant based in New York and the author of "Time Management From the Inside Out." The act of writing down and checking off a task can serve to "emblazon" a task in your mind and offer positive reinforcement that is both visual and tactile, she said.

But some people "think into their fingers and into the keyboard," she said, and for these types, digital to-do lists make more sense.

But don't use both, Morgenstern advises: "Decide on a single, consistent system - paper or electronic - and use that system as the one and only place to record everything you need to do."

If you choose the digital route, many to-do apps are available - from Evernote, Astrid, Remember the Milk and Todoist, to name just a few. Most have the advantage of being able to sync across all your devices and calendars. Some apps even have options that let you share your to-do items and have your friends egg you on to accomplish them.

But therein lies a danger, Vanderkam said. You might not want to share all of your goals, especially the personal ones, and these could accidentally end up on your shared lists, she said.

Each day, most of us have personal goals - say, buying a birthday gift or booking a flight for a vacation - along with professional ones. Vanderkam recommends keeping professional and personal goals on the same page or in the same file but grouping them separately. Many people are more organized at work than at home, and their personal goals might slip through their fingers if they're in a separate area, she said.

Morgenstern advises spending 15 minutes each day reviewing what you have completed and planning your goals for the next two days. This three-day arc gives you the chance to adjust your tasks and helps prevent last-minute crises, she said.

A daily to-do list needs a strong dose of realism and specificity, Morgenstern said. It's important to add time estimates to your tasks.

"Estimating how long things take will not only help you plan your days more realistically, it will also help you take advantage of blocks of time that open up unexpectedly" - say, when a meeting is canceled, she said.

Promoted
Listen to the latest songs, only on JioSaavn.com
And make sure to convert big, continuing tasks like solving a client problem into "concrete, measurable action steps you can finish and cross off your list," she said.

It's so dispiriting when, at the end of the day, my to-do list with 15 items on it has only a few or maybe none checked off. Better to pare it down and make the goals on it less sweeping. I like to feel all checked off when I go home.
© 2013, The New York Times News Service