How The World's Great Oil Powers Became So Powerless 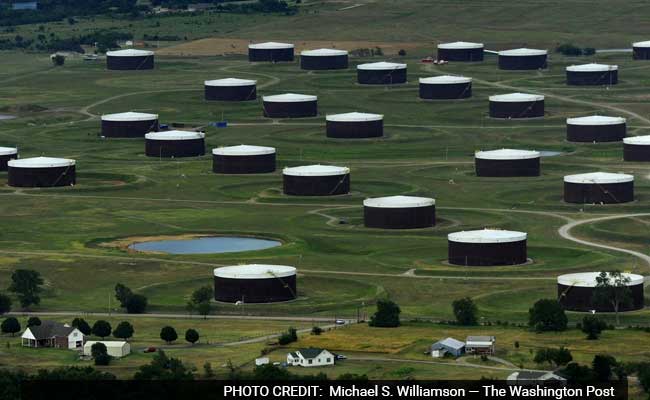 In Cushing, Oklahoma, a series of massive oil drums is storing more crude than at any point in the past decade.

To get a sense of how much more oil the world has than it needs, look to the world's oceans. Everyday, supertankers carrying two million barrels apiece sit idle, in hopes that the price of oil one day will rise again. Or look at the line of ships being turned away from ports at the Gulf of Mexico, the North Sea and everywhere in between. In some parts of the world, there is no more land left to store oil. Or, perhaps, look at the United States' largest oil storage facility -- a series of massive drums across the plains of Oklahoma -- which is storing more crude than at any point in the past decade.

Oil has been so cheap for so long that seemingly everybody is trying to wait it out. And, perversely, that's just perpetuating the rout. Right now, at least three billion barrels of oil -- a record -- is just sitting there. That oil alone could power the world for a month.

The excess illustrates the massive challenge that Saudi Arabia and other oil-producing nations confront if they want to halt a one-and-a-half-year collapse in oil prices that has upended the global economy: energy companies in the U.S. going bankrupt, sharp austerity in Saudi Arabia, economic combustion in Venezuela. Since July 2014, the West Texas Intermediate price of oil has dropped from $105 per barrel to $30.

To push up the price of oil, Saudi Arabia and other oil-exporting countries would have to shrink the supply of oil to the point that reserves are tapped. This is no easy task. Right now, the planet needs about 94.5 million barrels of oil per day, according to the International Energy Agency. It's producing nearly 96.5 million barrels per day. That's the greatest imbalance of the 21st Century, and for every day this gap persists, up to two million more barrels wind up in this overflow stockpile.

Prices will only rise when the market begins to believe that this abundance is tapering off, said Jim Burkhard, vice president and head of oil market research at IHS Energy.

"The overall sense of the market, certainly since last summer, is that we are a world awash in oil," Burkhard said. "Oil supply is in excess of demand by a significant measure. So it's created this sense that, gee, this is a world of glut and abundance."

Ever since the mid-1980s, when Saudi Arabia last flooded the oil market, the kingdom has cut production in order to push prices up. Other OPEC members contributed some relatively minor cuts to help. But this time, when prices began to fall due to a number of factors including China's slowdown and the burst of new energy resources in the United States, the Saudis held back, hoping the drop in oil prices would squash the U.S. fracking industry. That spurred a race to the bottom, one both the Americans and the Saudis felt they could win.

Now, the risk is that the low oil prices have persisted for so long that no country, not even the heavyweights, can bring them quickly back to "normal." This week, Saudi Arabia and Russia -- the world's second- and third-largest producers -- gave it a try, and the market basically laughed back at them. The plan essentially said that those two countries, along with Qatar and Venezuela, would freeze production, though it had many caveats. Oil investors had said the only way to push up prices was for them to cut production, but much as countries like Saudi Arabia dislike low prices, they're also fearful of losing market share.

"A nothing burger," Robert McNally, president of the Rapidan Group, a consulting firm, called the deal.

Forcing prices back up is going to require a far more significant step, analysts say, adding that more dramatic action is unlikely. That's why a lot of banks now predict oil will hang for the year in the $20-$30-per-barrel range.

One cure for cheap oil would come in the form of a stronger global economy -- and stronger demand for fossil fuels. That is, of course, the most palatable fix. It's also a long shot, given the slowing of China's manufacturing machine and stagnation from Japan to Europe.

The excess might also be erased if oil-producing countries -- the U.S. or Saudi Arabia, for instance -- break under the pain of low prices. But neither, so far, seems to be in the offing. To the surprise of economists, U.S. drillers have so far managed to largely maintain production by focusing their efforts on the best and most efficient wells. Despite 50-some bankruptcies and an oil price drop of more than 70 percent, U.S. output has climbed from 9.1 million barrels per day in November 2014 to 9.2 million this month. Some industry forecasters, though, do say U.S. oil output could drop this year after severe investment cutbacks in 2015.

Meantime, the Saudis have pumped full-on. The Saudis can stomach a period of low prices because their oil is relatively cheap to access and (perhaps more important) they've built a treasure chest of savings, usable for a rainy day. That money will eventually dwindle, but it figures to last several years and hasn't yet influenced the Saudis' strategy.

The cutback in production could also come from another country. Roughly 15 nations produce more than 2 million barrels per day. Any of them, in theory, could close the gap between supply and demand. But why would they? Pumping and getting some cash, however scant, may be viewed as better than letting your investments rot.

The last scenario is one in which many countries, acting in concert, enact gradual production decreases. That is, well, how a cartel would do it. And the oil world happens to include a cartel, the Organization of the Petroleum Exporting Countries. But OPEC has been weakened by disparate interests. Some countries suspect others will cheat on their pledges. And so no pledges get made. And every country continues pumping more than the world needs.