The Ever Given got stuck the morning of March 23, amid poor visibility and high winds in one of the narrower parts of the 120-mile canal. 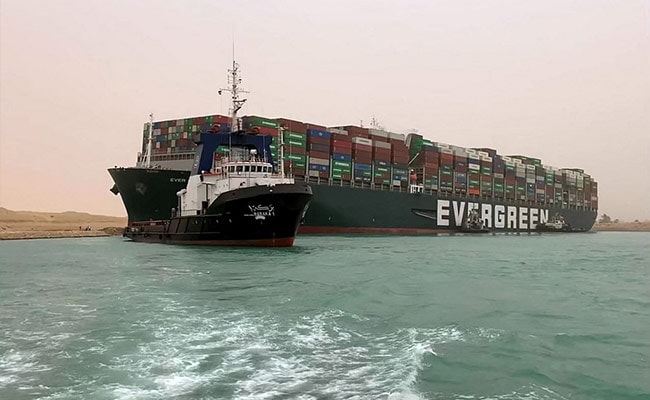 The Ever Given was fully dislodged on Monday at 3:05 p.m. local time.

The crisis in the Suez Canal last month turned the world's attention on a single challenge few had ever considered: how to refloat a 200,000-ton mass of steel, as long as the Empire State Building is high.

Digging, tugging and pulling, it turned out, freed the ship. The days-long, round-the-clock effort to move the massive vessel involved sucking sand and mud from underneath its hull, as tugboats pushed and pulled the ship in confluence with a swelling tide.

Here's how it happened.

The Ever Given container ship became stuck at an angle in the Suez Canal during a sandstorm on March 23, blocking for six days a vital waterway through which about 15 percent of all shipping passes.

Using satellite imagery and vessel data, The Post reconstructed the operation that released the ship. 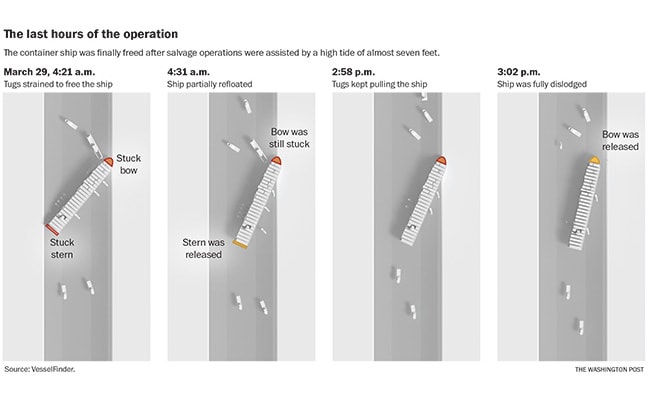 The canal narrows below the shoreline, which meant the ship was much more stuck than it appeared to be in photos. Riprap, or loosely placed stones, lines the banks, which made it even harder to dislodge the ship.

A fleet of tugboats, dredgers and salvage crews worked for several days to refloat the ship. On Monday morning, they managed to free the stern, the back of the vessel, the most visible sign of progress since the blockage.

After a morning boost from a high tide reaching nearly seven feet, a new attempt to release the Ever Given began Monday afternoon.

The Ever Given was fully dislodged on Monday at 3:05 p.m. local time.

The Ever Given got stuck the morning of March 23, amid poor visibility and high winds in one of the narrower parts of the 120-mile canal. Egyptian officials have launched an investigation into the details of the crash.

"When you're traveling on a boat and you hit something, there's a tremendous sense of loss," said Gregory Tylawsky, a licensed shipmaster and founder of the Maritime Expert Group.

Early in the crisis, experts were unsure how they would be able to move the ship. "It is not really possible to pull it loose," said Peter Berdowski, the CEO of Dutch dredging company Boskalis, which helped with the week's efforts.

The vessel, he said, was like "an enormous beached whale."

The canal is dug in sand and mud, meaning a boat hitting the edge would get "stuck in the sand rather than [getting] repelled by a hard wall," said Ragui Assaad, a professor at the University of Minnesota and research fellow at the Economic Research Forum in Cairo.

There is little room for error. "As a pilot, you cannot deviate from that center line," Tylawsky said.

Within hours of the blockage, tugboats were on the scene, followed by dredgers, working through the week to free the Japanese-owned, Taiwanese-operated ship.

Each hour the Ever Given remained stuck on a muddy bank of the Suez Canal meant worse disruptions to international commerce. A substantial share of all shipping passes through the waterway. In the face of delays, the prices of oil and coffee began to rise, and livestock faced starvation aboard some of the hundreds vessels left waiting indefinitely.

With a ship that size already caught in the canal's bank, there wouldn't be much for the operators to do.

"It'd be controlled chaos onboard," said Gary Cordes, a retired shipmaster and senior adviser at the Maritime Expert Group, who said he transited the canal nine times between the 1960s and 1980s. He said it would fall on those familiar with the landscape to come up with a plan to free the ship.

Authorities worked day and night, dredging and using tugboats to dig and pull the ship away from the banks. Salvagers dredged underneath and around the hull, pumping sediment from the bottom of the canal.

The dredgers on scene were heavy-duty. The 10th of Ramadan came to help, as did the Dutch-made Mashhour, owned and operated by the Suez Canal Authority, which was touted by the Transportation Research Board in 1996 as the "world's largest and most powerful stationary cutter suction dredger," capable of sucking up "abrasive sand with gravel, compacted sand, sticky clay and rocks."

Often more than 10 tugboats were also leading the effort, pushing and pulling the ship in an effort to dislodge it from the bank. 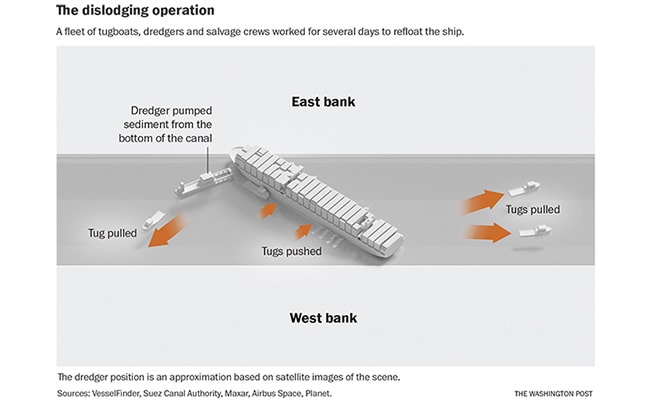 Loaders excavated the eastern embankment at the ship's bow. Over the weekend, those efforts removed nearly 1 million cubic feet of mud and water, officials said.

In an added effort to refloat the ship, some 9,000 tons of the Ever Given's ballast water - used to stabilize the ship - were released to help lighten the vessel, officials said. 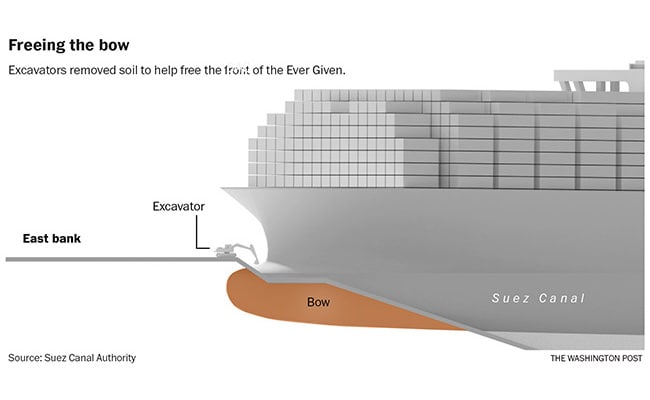 While efforts throughout the week proved unsuccessful, the weekend bore promises of shifting tides. A full moon on Sunday night meant unusually high waters that could help refloat the ship. And more help was on the way: two big and powerful tugboats, the Dutch-flagged Alp Guard and the Italian-flagged Carlo Magno.

Through Sunday night into Monday afternoon, teams worked tirelessly to get enough of the sand and mud out from under the boat that it would rejoin the canal's waters, staving off a catastrophe for global trade.

On Monday afternoon around 3 p.m., the Ever Given broke free, its leviathan haul slowly creeping north to the Great Bitter Lake.

"I think they did a spectacular job," said Cordes, acknowledging he initially thought the effort would maybe take "a couple of weeks."

The mood on the scene in the Suez Canal was ebullient, as workers cheered and vessels honked. But the ripples of the Ever Given's release were felt around the globe.

"To do that is one thing but to do it in front of the world, with the world watching, it was massive," Tylawsky said.