How Trump Replied To A 7-Year-Old's Anguished Letter

Ava Olsen was in first grade at Townville Elementary during a 2016 school shooting, she wrote. She told the president that she lost the 6-year-old boy she wanted to marry. 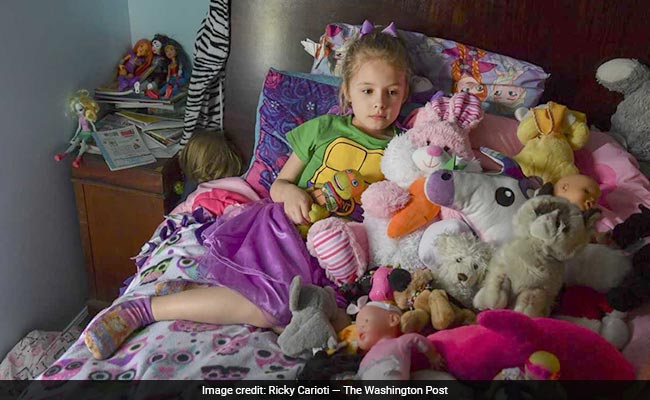 The manila envelope arrived on Mary Olsen's doorstep the day after Christmas, and in its top left corner were three words that stopped her: "THE WHITE HOUSE."

It was addressed to her daughter, Ava, but Olsen opened it and scanned the letter first to make sure the message didn't include anything that might trigger her second-grader's debilitating anxiety. Olsen then called her little girl into their living room, where they sat together on the couch. She gave Ava the note, which, at the top, included the presidential seal.

"Dear Ava," it read. "Thank you for your letter. It is very brave of you to share your story with me. Mrs. Trump and I are so sorry to hear of the loss of your friend, Jacob."

Fifteen months earlier, on a fall afternoon in tiny Townville, South Carolina, Ava had just walked outside her school for recess when, police say, a 14-year-old drove up to the playground in a Dodge Ram, jumped out of the pickup and pointed a gun. The accused teenager - who is expected to learn this month whether he'll be tried as an adult - continued firing for just 12 seconds before his pistol jammed. By then, three people at Townville Elementary School had been shot.

One bullet struck Ava's first-grade teacher in the shoulder, and another hit a classmate in the foot. A third struck 6-year-old Jacob Hall, who wore thick-lensed glasses and, at 3½ feet tall, was the smallest kid in their class. Ava had decided to marry him when they grew up. He was the only boy she'd ever kissed. 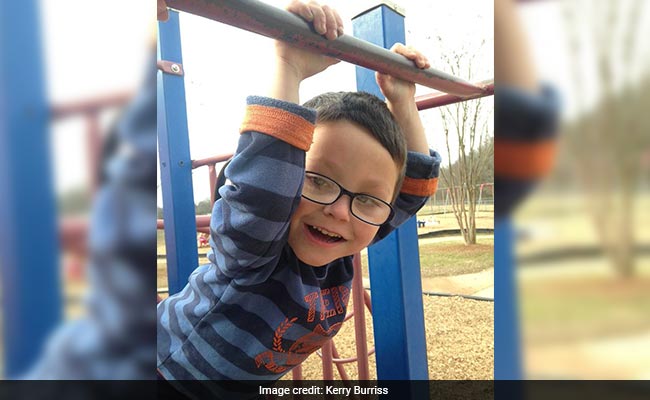 Jacob Hall was fatally wounded on the playground at Townville Elementary on Sept. 28, 2016.

Ava was so overwhelmed by the loss, and the terror of what she'd witnessed, that a doctor later diagnosed the girl with post-traumatic stress disorder and recommended that she be home-schooled. In the months that followed, the torment - described in a Washington Post story about the shooting - often consumed her. She yanked out her eyelashes and used stickers to cover up scary words in "Little House on the Prairie": gun, fire, blood, kill.

Although she didn't go to school anymore, her younger brother, Cameron, who had also been outside that afternoon, did. Ava, her brown eyes serious and her mind seldom at rest, worried about him and the millions of other children still spending their days in classrooms and cafeterias and playgrounds. So, one morning last summer, she sat at her kitchen table with a pencil and a sheet of notebook paper. 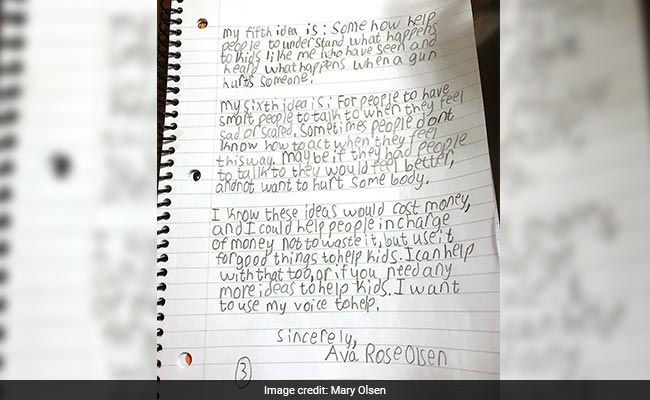 Ava Olsen had sent a letter to President Trump in August 2017 addressing gun violence and attacks on schools.

"Dear Mr. President," Ava printed in neat block letters, before explaining that she'd lived through a school shooting. "I heard and saw it all happen and I was very scared. My best friend, Jacob, was shot and died. That made me very sad. I loved him and was going to marry him one day. I hate guns. One ruined my life and took my best friend."

She asked how the president would protect children from more school shootings.

The boy accused of firing the gun that ruined Ava's life grew up in Townville and even attended the same elementary school, where teachers remembered him as a model student. But Jesse Osborne had found trouble when he left. In seventh grade, his family said in interviews last year, he was kicked out of middle school after bullies harassed him, and another student spotted a hatchet in his backpack.

That's why he was at home on that Wednesday in late September 2016. For reasons that remain unclear, his mother said, Jesse retrieved a gun from his father's nightstand, shot him in the back of the head and then, investigators allege, drove to the elementary school and opened fire.

On that day, Townville's kids joined a group that now includes more than 150,000 students, attending at least 170 primary or secondary schools, who have experienced a shooting on campus since the Columbine High School massacre in 1999, according to a Post analysis of online archives, state and federal enrollment figures and news stories. That doesn't count dozens of suicides, accidents and after-school assaults that have also exposed children to gunfire.

After months of psychological analyses and legal delays, a judge is expected to review testimony and evidence the week of Feb. 12 before deciding whether Jesse should be tried as a juvenile or an adult. If it's the latter, he could face decades in prison.

The shooter is never far from Ava's mind. She remembers him as a towering and terrifying figure, and he often appears in her nightmares. She sometimes repeats what she heard him say on the playground - "I hate my life" - and once, after Ava accidentally pushed her brother and he hit his head on a stone well, she blurted: "I'm just like Jesse."

Now, though, she was sitting on her couch just after Christmas, staring at a reassuring letter signed by the most powerful man in the world.

Trump receives thousands of letters, including many from children, said a White House spokeswoman who requested not to be named. Some have made news, including one from a 10-year-old who asked to mow the White House lawn (and did), and another, from a 9-year-old nicknamed "Pickle" who wanted the president to know he had a Trump-themed birthday party.

"The president gets lots of drawings," she said. "He loves those drawings."

Letters from ordinary Americans were central to the daily life of former President Barack Obama, who read 10 of them each night and often sent personal handwritten responses.

Trump's spokeswoman wouldn't say how many letters the president reads or whether he contributes to the typed replies that bear his name, but she noted that "the president plays a role in correspondence that have been elevated to his desk," as Ava's was.

Initially, for the girl, nothing was more fascinating than Trump's massive, jagged signature, scrawled in black marker at the bottom of the page.

"Schools are places where children learn and grow with their friends. Their halls should be free of fear," the letter read. "It is my goal as President to make sure that children in America grow up in safe environments, giving them the best opportunity to realize their full potential. I will continue to focus on protecting Americans and improving the safety of our Nation.

"Mrs. Trump and I hold you close in our hearts," it continued. "We hope you always remember that no matter what may happen, there are so many people in your life who love you, support you, and want to see you fulfill all your dreams."

The note made her feel better, at least for a few days, before she started to think more about it.

"He didn't say how he could keep kids safe," Ava told her mom. So on Jan. 8, she sat down to write another letter.

Ava thanked him for the response and the promised prayers.

"I sometimes still think about that day in my head thinking it will happen again," she wrote. "If you have the time, I have some ideas to help keep kids and schools safe. Sometimes people who live through a school shooting have better ideas."

Ava told him what they were: Move schools to safer places, give children a place they can run to if something bad happens, build schools in circles and put the playgrounds in the middle.

She stuffed the letter in an envelope, and her mother mailed it, and Ava hoped that everything would get fixed before any more kids were hurt.

Then two weeks later, in Kentucky, police say another teenager at another school fired another gun, killing two students and wounding a dozen others.

At the White House, press secretary Sarah Huckabee Sanders told reporters that Trump believed all Americans deserved to be safe in their schools and communities.

"Students fearing for their lives while they're attempting to get an education is unacceptable," Sanders said, but she offered no specific plans the administration had to stop school shootings.

In South Carolina, Ava heard nothing about the carnage in Kentucky. Her mom didn't mention the news and kept the TV turned off.

She didn't want her to daughter to know.

(This story has not been edited by NDTV staff and is auto-generated from a syndicated feed.)
Comments
Letter to TrumpTownville Elementary SchoolSouth Carolina shooting