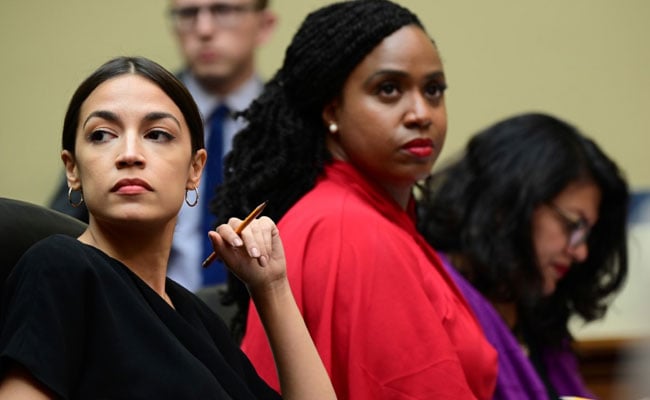 The four congresswomen-elect, in Washington for the November 2018 new-member orientation, had gathered for an interview about the history they had made. There simply had not been people like them in Congress before: no one younger than Alexandria Ocasio-Cortez; no Muslim women before Ilhan Omar and Rashida Tlaib; no black woman representing Massachusetts before Ayanna Pressley.

Afterward, someone snapped a photo of them smiling broadly, and then came a crucial question: how to caption it for the 'gram. As they would later tell CBS' Gayle King, Ocasio-Cortez had an idea: How about something like "#squadgoals?"

So Ocasio-Cortez slapped "Squad" on a post, uploaded it and tagged her colleagues, who followed with similar posts. It was a spontaneous, perfectly natural thing for a millennial woman to do and, as it turns out, a moment of serendipitous branding.

"So many of us didn't run to be the first of anything," Tlaib said this week as she left a hearing. "We ran to change people's lives for the better."

But they are firsts, and that - along with their high profiles on social media - has brought a massive amount of attention to the Capitol Hill Squad.

"Squad" - dictionary-defined as a small, organized military group, or any small group engaged in a common effort - carries a specific cultural meaning about loyalty and friendship built up from its use in black culture, hip-hop and, more recently, through social media hashtags, by Taylor Swift and your boomer parents texting GIFs. Now "squad" has fully entered the political arena as shorthand for the four progressive lawmakers and what they represent; the term is humorlessly cited on cable news banners, evoked by the lawmakers' supporters and lobbed on Twitter by a president intent on using the quartet as a political foil.

So begins the rush to define the parameters of "squad" and how narrow or expansive it is. President Donald Trump, who sent racist tweets suggesting that the congresswomen - all American citizens - "go back" to other countries, has labeled the Squad as "very Racist" "troublemakers," "young, inexperienced, and not very smart."

Tlaib, however, said last week that "Squad" has a broad political meaning. It stands for "a new era of what government should be about, [with] people on the ground, making sure that corporations are not seeping into our democracy and tainting the process."

"One of the things that I love about everybody that supports equity and justice, that 'we are the Squad' - you hear people saying, 'I'm part of the Squad, too' - is we translated it into the movement work we all came from," she added.

Politicians have long called upon the power of pop culture to connect with voters and project coolness. Bill Clinton played the saxophone on late-night TV, Barack Obama pushed the Affordable Care Act between two ferns with Zach Galifianakis, and Sen. Marco Rubio gushed about Tupac. Trump, a former reality TV host, is himself a product of pop culture.

There is peril for politicians referencing pop culture: They can come off as trying too hard, and nothing kills coolness faster than that.

The trick to guarding against appearing contrived is to be yourself, said Tommy Vietor, "Pod Save America" co-host and a national security spokesman under President Obama. The four congresswomen are between 29 and 45 - much younger than the average House member, who is just over 57 - and are "talking the way young people talk" and "reaching people in a new way, through new language," Vietor said.

"The challenge in politics is ensuring that people see themselves in their representatives," he said, and politicians struggle to galvanize younger Americans in part because "politics can feel older and stuffier and the language can feel stilted."

Coming from the freshman lawmakers, "Squad" signals both female friendship and a "generational divide," said Nadia Brown, a political science professor at Purdue University. In recent weeks, the term has mainly been used to distinguish the four congresswomen from their fellow Democrats. A rift between the quartet and House Speaker Nancy Pelosi, D-Calif., burst into public view this month over the Squad's opposition to a border bill that had the speaker's backing.

Pelosi and Ocasio-Cortez have since played down their differences - the two met Friday and discussed working together. And, of course, Pelosi tweeted a photo of them standing side by side.

But the Squad's members have already managed to draw attention to their shared progressive values and have set themselves apart from fellow Democrats, Brown said.

Still, some, including liberals, express discomfort with calling these grown women and elected members of Congress by such a colloquial term. Is it, as one writer asked on Twitter, infantilizing?

And for many younger women of color, Kendall said, "it's perfectly fine for them to feel represented by this and feel like their culture is now happening in the places where decisions are made about them."

We've seen legislative gangs but few squads; an 1838 Salem Gazette article refers to a voting bloc of several Southern Democrats in Congress as the "Calhoun Squad."

Craig Jenkins, music critic for New York Magazine, said he was introduced to the term in "hip-hop parlance as a descriptor of black friendship, so it was interesting to see the term get co-opted in the ways that it has."

The rapper Waka Flocka bellowed "squaaaad!" for years and in 2015 claimed he "started the word #SQUAD." Taylor Swift released an album that year and in promoting her brand of female friendship pushed the idea of "#squadgoals" into a whiter, older pop-culture arena. Headlines used the hashtag to describe a range of people including Kim Kardashian's daughter and niece and the presidents on Mount Rushmore, and declared this the summer of the squad.

Now the lawmakers' use of the term functions as "a call-in for folks, if you get the joke and find this funny," said Jeff Chang, a scholar of race and hip-hop. "If you don't understand, then it's not there for you, which is basically what hip-hop has always been about; the other part of hip-hop being, everyone finds it cool and wants to sort of adopt it."

Trump - who likes to brand opponents with his own mocking nicknames - uses "Squad" derisively with what Jenkins calls scare quotes. The president's supporters have likewise used the term with sarcasm or tried to rebrand the women; Fox News host Laura Ingraham labeled them as "AOC plus 3," a name that Trump has also taken up.

"Right now the Squad is a very effective placeholder for the eventual Democratic nominee," said Amanda Carpenter, a conservative Trump critic and former spokeswoman for Sen. Ted Cruz, R-Texas. "Donald Trump is eating this up. Not only Donald Trump, but the broader fringe conservative ecosystem relies on having an adversary."

In another flip of the term, Trump backers are co-opting it. The Women for Trump coalition, which is led by Trump's daughter-in-law Lara, tweeted photos of their group and declared they were, in fact, the "real" or "better" squad.

"It's a clear reference to what the four freshman members of the House call themselves, only the members of Women for Trump are proud of this country and support the president's policies," said Trump campaign spokeswoman Erin Perrine. Their group is a "much more positive, pro-America squad," she added.

Sometimes politics can totally redefine a term. "Dog whistle," for instance, had a very literal meaning until it became specifically political, with no apolitical middle ground.

With "Squad," though, "I don't think the application we are seeing right now in referring to the four congresswoman is a truly new political meaning," said Emily Brewster, an associate editor at Merriam-Webster. At least not yet.

"It'll be interesting to see in what other situations people will self-identify as squads going forward," she added. "Has this done something to the term? Is it going to make self-identifying with it more complicated or become even more of a badge, or something else?"

For now, people like Brown think the quartet should wield its label as a rallying cry. "The Squad need to claim it for themselves, as a way to raise money for black and brown candidates to run in 2020," Brown said.

The congresswomen are building on cultural notions of a mass sisterhood, said Lilly Goren, a political science professor at Carroll University whose areas of focus include culture. Squad, in this sense, is "about more than the four of them. They are pushing themselves as representatives of voices of not only their own constituents, but a variety of other constituents, of color, younger women, women in general."

"We could use a term like caucus," Goren said, "but again, that also seems less contemporary."

Language naturally evolves. The increased volume of the written word, thanks in part to the Internet, has accelerated that process. Because of its association with youth, perhaps the word "Squad" is unsettling to some people, particularly in the formal and staid settings in which it is being bandied about, Brewster said.

"People have been complaining for many hundreds of years that the youth are destroying English," but the language just grows and gets better, Brewster said.

"On some level," she said, "people are always afraid of change."