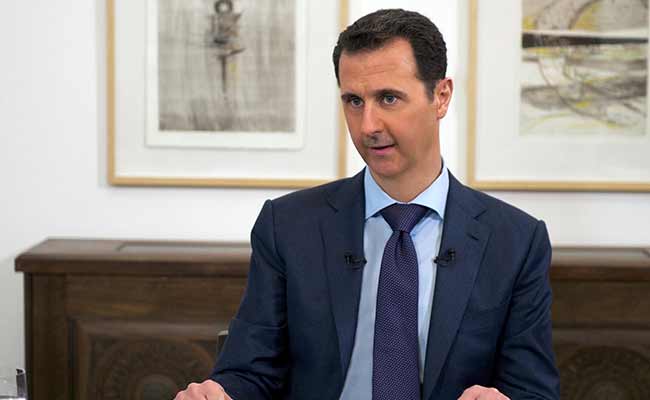 At the same time, the US held firm to its calls for Assad's departure, with President Barack Obama insisting Thursday that the war could not end unless the Syrian leader steps down.

"I do not foresee a situation in which we can end the civil war in Syria while Assad remains in power," Obama said on the sidelines of a trade summit in Manila.

Top diplomats from 17 countries met in Vienna on Saturday to discuss a way out of Syria's nearly five-year conflict, which has left more than a quarter of a million people dead.

They produced a two-year timetable: a transitional government would be formed and a new constitution written within six months, to be followed by internationally monitored elections within 18 months after that.

But in a television interview with Italy's Rai television, Assad said there could be no transition schedule for elections while swathes of Syria remained out of government control.

"This timetable starts after starting defeating terrorism. You cannot achieve anything politically while you have the terrorists taking over many areas in Syria," he said.

"If we talk after that, one year and a half to two years is enough for any transition."

Damascus refers to all opponents -- fighters and activists alike -- as terrorists.

Syria's government has insisted that combatting "terrorist groups" including the Islamic State (IS) jihadist organisation should come ahead of any political solution.

In comments to French magazine Valleures Actuelles, the embattled leader said Syria could only accept observers from countries that "were not partisan during the crisis".

Meanwhile, Russian Foreign Minister Sergei Lavrov said Moscow would be ready to work with the Western coalition striking IS if its members respect Syria's sovereignty.

Russia is "ready to develop with them such forms of coordination that of course would respect Syria's sovereignty and the prerogatives of the Syrian leadership," Lavrov told state-run Radio of Russia.

Despite holding diametrically opposed views on the fate of Assad, Russia and France are set to begin coordinating military and security efforts in the anti-IS fight.

The remarks by world leaders have rolled back hopes that a political solution was on the horizon.

On Tuesday, US Secretary of State John Kerry said Syria could be "weeks away" from a transition.

But Waddah Abed Rabbo, editor-in-chief of Al-Watan daily, which is close to the government, said: "Syria's president is much more realistic than the Vienna declaration.

"Can we imagine elections in Raqa or Deir Ezzor?" he said, naming two provinces where IS has a strong presence.

"We must first eliminate this scourge and re-establish the presence of the state throughout the whole country, before beginning the countdown to elections. "

On Wednesday, IS's English-language magazine said it had killed two hostages by printing graphic photos of two bodies that appeared to be Chinese hostage Fan Jinghui and Norwegian Ole-Johan Grimsgaard-Ofstad.

IS territory across eastern, central, and northern Syria is the target of a US-led air coalition as well as Russian strikes.

Observatory head Rami Abdel Rahman said those killed were oil smugglers and their families, not jihadists.

Another eight people were killed in government shelling on Sheikh Maskin, a village in Syria's southern Daraa province, the Observatory said.

Meanwhile, Syria's army and rebels struggled to pursue talks to reach a 15-day ceasefire in the Eastern Ghouta rebel stronghold east of Damascus.

The two sides had been locked in talks overnight in the hopes of reaching a deal by 6:00 am (0400 GMT), in what would be the first temporary truce in Eastern Ghouta.

"The mediators are still at work," but the situation was less hopeful than this morning, Abdel Rahman said.

A Syrian security source told AFP that "the window to reach an agreement has not ended, but we have yet to reach the results stage."

The Observatory said rebel shelling of the capital wounded 16 people on Thursday.