Wong, 24, was prosecuted alongside fellow activists Ivan Lam and Agnes Chow over a rally last summer outside the police headquarters. 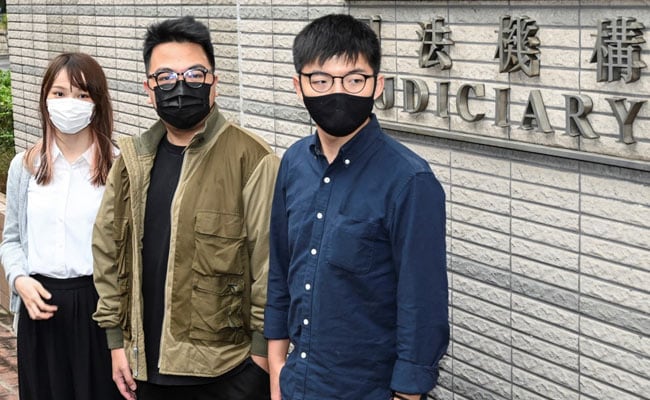 Wong was prosecuted alongside close friends and fellow campaigners Ivan Lam and Agnes Chow over a rally outside the police headquarters.

"It's not the end of the fight," the 24-year-old said on Twitter in a message conveyed by lawyers shortly after his sentencing.

"We're now joining the battle in prison along with many brave protestors, less visible yet essential in the fight for democracy and freedom for (Hong Kong)," he added.

The trio -- some of the city's most visible and vocal critics of Beijing's rule -- pleaded guilty to inciting an unlawful assembly and other charges.

Magistrate Wong Sze-lai said prison was "the only appropriate option" for a protest that besieged the police headquarters as she handed Wong a 13.5 months sentence.

Chow, who turns 24 on Thursday and burst in tears in court, received 10 months. Lam, the 26-year-old son of a former policeman, got seven months.

Hong Kong was convulsed by seven straight months of huge and often violent rallies last year in which millions took to the streets.

Beijing has refused demands for universal suffrage and authorities have pursued democracy supporters with criminal cases and a tough new security law.

The tactics have stifled the movement and restored a semblance of calm.

But the finance hub remains deeply polarised with many still seething against Beijing's growing hold on the semi-autonomous city.

Wong and Lam have already spent time in jail for leading democracy protests. For Chow prison is a first.

"I believe they will continue to be very important people to Hong Kong in the future."

"Once again, the government has used the politically motivated charge of 'inciting others to protest' to prosecute people who have merely spoken out and protested peacefully," regional director Yamini Mishra said.

Wong, Chow and Lam joined the pro-democracy movement when they were in their teens in a David versus Goliath battle against authoritarian China.

And they played prominent roles two years later in the "Umbrella Movement" -- a 79-day peaceful occupation by a largely student-led campaign calling for universal suffrage.

Leading figures from those protests, including Wong, were jailed and the democracy movement struggled in the years after.

But it exploded once more in June 2019, sparked by plans to allow extraditions to mainland China and its opaque legal system.

Small groups of hardline activists resorted to rocks and petrol bombs as well as targeted vandalism and arson.

Figures like Wong and Chow have used their status over the years to lobby for international sanctions, a move that infuriated Beijing with state media often casting them as traitors.

A handful of government supporters popped sparkling wine outside court Wednesday when news of the sentences emerged.

Supporters of the trio shouted democracy slogans as prison vans passed by.

Protest has been all but outlawed in Hong Kong this year. More than 10,000 people have been arrested over the last 18 months and most of the city's leading opposition figures face prosecution.

Earlier this summer, Beijing also imposed a broad security law which ramps up its direct control over the city and outlaws certain political views.

Chow is being investigated under the security law for allegedly "conspiring with foreign forces" by pushing for sanctions.

Wong is among another group of activists being prosecuted for a vigil marking the anniversary of Beijing's 1989 Tiananmen crackdown earlier this year.

Critics, including many Western powers, say China has shredded the freedoms and autonomy it promised Hong Kong could keep after the 1997 handover.

Beijing counters that security after violent unrest has been restored.