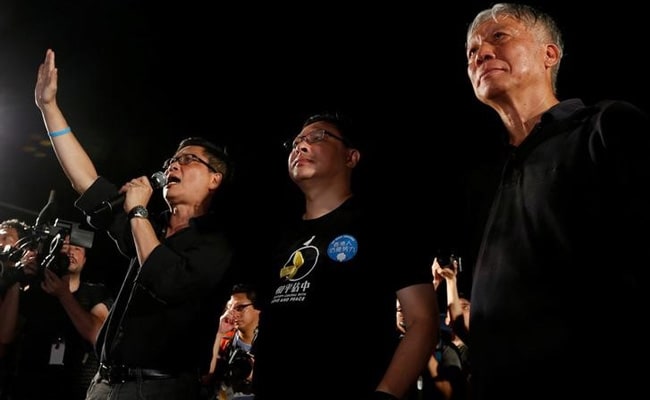 Hong Kong: A Hong Kong democracy activist was jailed Thursday over Umbrella Movement mass protests while nine more campaigners face charges, as fears grow that freedoms are under threat in the semi-autonomous city.

The cases come days after pro-Beijing leader Carrie Lam was selected as city leader by a committee skewed towards the mainland camp.

They also precede an expected visit by China's President Xi Jinping in July to mark the 20th anniversary of the handover of Hong Kong back to China by Britain in 1997.

Activist Alvin Cheng, 28, who has in the past advocated the idea of Hong Kong's independence from China, was sentenced to three months in prison for criminal contempt of court.

The charge related to defying an injunction order for activists to clear a sprawling protest camp in the commercial area of Mong Kok in November 2014 during the Umbrella Movement rallies, which called for fully free leadership elections but failed to win concessions from Beijing.

Mong Kok saw some of the most violent clashes during the demonstrations and some activists refused to leave the site despite the order from authorities.

Judge Andrew Chan said Cheng had shown "little remorse" and also chastised him for being late to hearings, and playing with his mobile phone.

Another protester, Au Yuk-kwan, was fined HK$10,000 ($1,287), also for defying the clearance injunction, and given a suspended one-month jail sentence.

Separately Thursday, nine other campaigners accused of causing a public nuisance or inciting others to do so during the 2014 rallies appeared at magistrates' court, in a case they have criticised as political persecution.

The group, ranging from 22 to 73-years-old and including students, professors and lawmakers, were charged one day after pro-Beijing Lam won the leadership.

They could face up to seven years in prison.

Their case was adjourned to May 25 after a brief hearing, during which the defence requested a High Court jury trial so that the public could participate in the decision.

They have yet to enter a plea.

Rival protesters from the pro-democracy and pro-China camps faced off outside the court where the nine activists' case was being heard, chanting at each other.

Some pro-China supporters slapped a picture of democracy campaigner Benny Tai with a pink plastic slipper, mimicking a local custom practised by some where a shoe is used to beat an image of an enemy.

Speaking outside court, Tai told reporters the activists would not give up on the fight for democracy in Hong Kong.

"I believe our society is steeped with the spirit of civil disobedience," said Tai, co-founder of Occupy Central, one of the groups behind the Umbrella Movement rallies.

"We won't give up until Hong Kong has real democracy and real universal suffrage," he added.

Rights group Amnesty International condemned the charges, saying the case showed the city's freedom of expression and right to peaceful assembly was "under a sustained attack".

Tsang was himself attacked the same night by seven police officers who were jailed for two years in February for assault causing actual bodily harm.

Sunday's vote was dismissed as a sham by democracy campaigners who say Lam will be no different from unpopular current chief executive, Leung Chun-ying.

(Except for the headline, this story has not been edited by NDTV staff and is published from a syndicated feed.)
Comments
Activist Alvin ChengHong Kong ResistanceUmbrella Revolution